My driver's license says I weigh 200 pounds. This has been a joke most of my adult life, as I have hovered around the low 230s for almost two decades. It's a comfortable weight for a computer-bound, 6'3" guy. Not obese, but soft. Plenty of padding for the Midwestern winters.

I once hit 240, which is technically classified as obese for my height. And I used to own a pair of size 40 pants. They were comfortable.

By now you see where this is going, and yes, it's going to be one of those blogs where some dude talks about losing weight. Nobody likes to hear about that stuff. I get it. Especially during the winter.

Feel free to stop reading now. It's not going to get better.

Last spring I started running. I wasn't being chased — it was on purpose. I was trying to get in shape for a weekend of steadicam filming. I continued to run after the shoot and into the summer, and I was surprised to notice how much of a difference I felt just being somewhat in shape. And it was almost even fun.

I didn't lose weight though. Maybe a few pounds, but nothing noticeable. And that was disappointing. You always think, all I need to do is put on some running pants, buy some athletic sneakers, download eight fitness apps, make a running playlist, update the fitness apps, change into running shorts, and I guess, eventually run. And you'll lose weight.

It was around the time I was noticing a lack of weight loss that I also kind of plateaued on my running times. This was a pattern I've experienced before, where I stop progressing and eventually, though unintentionally, stop running.

I didn't want that to happen this time. I would be a dad again in a few months, and I would turn 40 shortly after. It seemed like a good time to get slightly more serious about losing weight.

It was at that time that two important things happened. First, I had a visit from my brother-in-law in June who came over to pick up something for my sister's birthday. He looked downright slim, so I asked for his magical secrets. It was purely diet — eating less calories.

Shortly after that, I was chatting with Hannah, her brother and a friend about counting calories. They all pointed me toward an app that I tried out for a week. Basically I just had to log every single thing I ate throughout the day. It was tedious but extremely enlightening.

During the first couple days, I felt compelled to cheat by not logging everything. Maybe the second white mocha of the day was a special treat, not something I have all the time, so I probably shouldn't log it. And it didn't take long to realize that I basically had "special treats" every day.

After a week of logging food, I changed some of my eating habits. Instead of starting each day with a huge bowl of Wheaties, I had a reasonable serving. Instead of two PBJs for lunch, I just had one. Instead of a white mocha every single day (sometimes two), I switched to an Americano with cream and sugar. I eventually dropped the sugar and cream.

Most importantly, I stopped grazing the kitchen between meals and over-indulging in desserts. Working from home most of the time makes grazing almost inevitable, so that battle is won at the grocery store by just not buying snacks.

The first couple of weeks were hard. I craved food, especially sweets. And I felt a new feeling creeping into my days: hunger. Actual hunger. This didn't seem like it was sustainable. But everyone said it would get better in a couple weeks, so I wanted to give it a try.

Sure enough, in a week or two, the cravings subsided greatly. Feelings of hunger started to become more predictable, familiar and manageable. I was gaining self-control, and I started to lose weight.

I didn't actively start weighing myself until Martin was born. Hannah had been pregnant this whole time, so it wasn't really the best time to share joyous exclamations about weight loss. But in mid-September, I started weighing myself every week and plotting it on a chart. 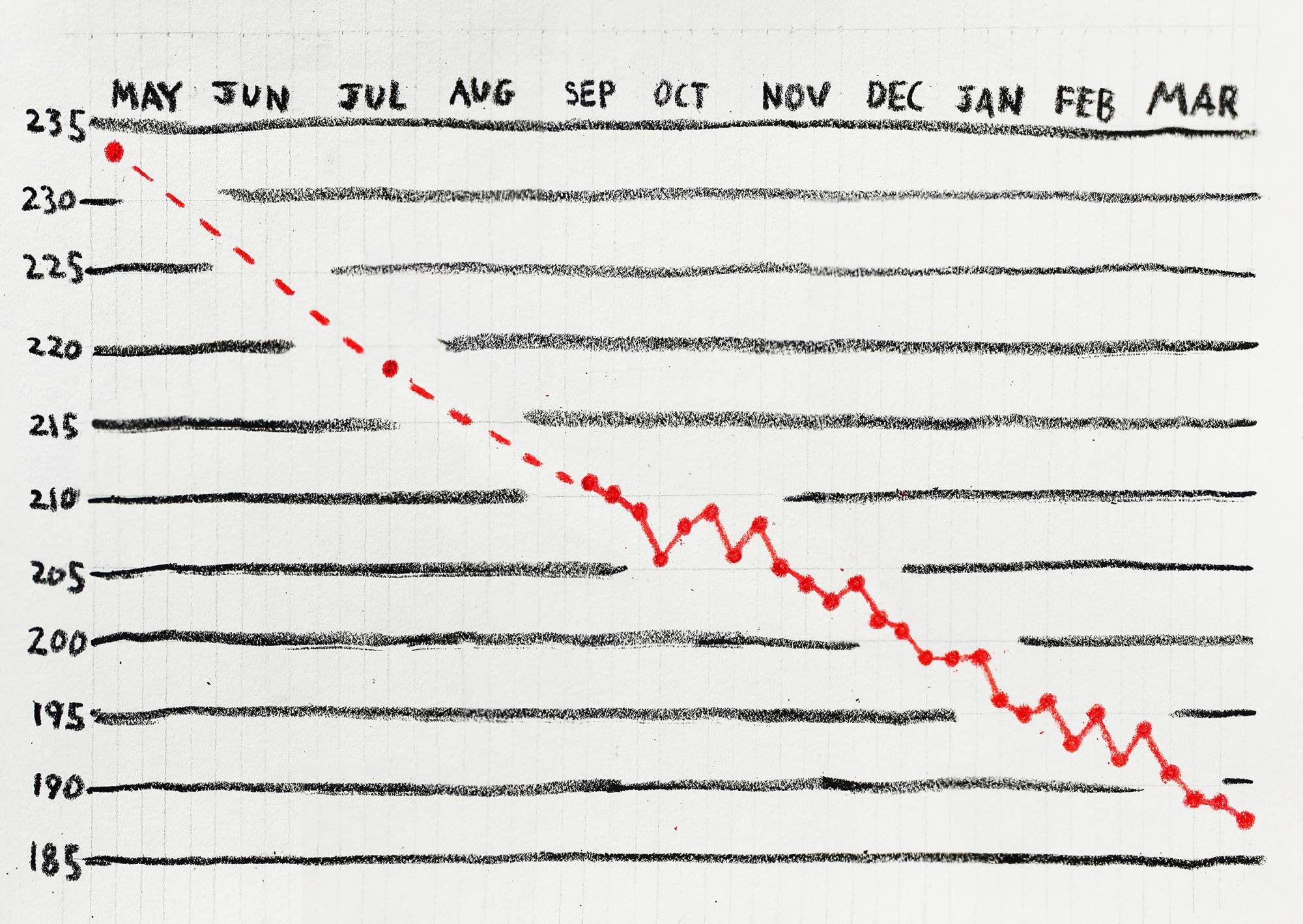 In late October, as the weather changed and the sleep deprivation from having an infant was setting in, I stopped running. The winter — and all of its food-intensive holidays — was fast approaching, and I was sure my weight loss journey was coming to an end.

To my surprise, although I completely stopped exercising, I was still able to maintain my somewhat healthy eating habits, and I continued to lose weight.

There were some ups and downs over the winter, and on Super Bowl Sunday I completely threw all the rules out the window and ate an absolutely embarrassing amount of food. I was happy to find that just like you can't lose weight overnight, you can't put it back on that quickly either. I had snuck one in under the radar.

Anyway, it's been quite a change for me. I've had to get all new clothes. Some of the old clothes I've been keeping around for years in hopes that they would fit me again — they are now too large for me to wear. It's weird, but ok.

Today, I weigh 188 pounds. I've lost around 45 pounds in the past 9 months, an average of a little over a pound per week.

I feel great. I feel like a new person. It's so much easier to get up and get moving. It's easier to run, bike and do handstands. It's easier to jump on trampolines with Mia and not feel totally wrecked the next day (I'm working my way up to learning backflips).

Eating is better. It's easier to get full, it's easier to pass up sweets and junk food, and I enjoy food more now.

Now that the weather is changing, I've started running again. And I'm 15 pounds lighter than when I stopped running, so it's been a lot easier to pick it back up.

Ok ok, I'm sorry. You don't care. Blah blah blah, Dave lost some weight, blah blah blah. Good for him. I get it. I'm not really writing this to gloat to the world (ok a little maybe). I want to record it for myself, so I can look back on this someday, and so I can motivate myself to keep going. Because I just got rid of almost every piece of clothing in my closet.

Right on Dave. Weight is lost in the kitchen, muscle comes from, I dunno, I guess something other than sitting around reading blogs.

Proud of you bro!

Keep up the good work, Dave!

You dropped even more weight as you were writing the blog. I can tell the original title was 192. Glad you posted this. Great inspiration.

Damn, Dave. Quite impressive. And you're inspiring me...

Very inspirational! I have a sugar addiction and can relate to working from home. Getting lost in the abyss of work and seeking comfort food - I need to stop. Thanks for the good read. Keep up the great work!

So the minimalist wants to know, how many articles of clothing do you actually own now?