Think about some of your earliest memories. You were a child. Maybe you were with family. Maybe siblings. Your perspective on the world was completely different. The memories are fuzzy. You remember some details, but others are gone. You're not even sure if it's a real memory or was fabricated from stories you've heard.

But your memories are yours, and they exist at the core of what makes you who you are. They're locked up in some secret vault at the center of your mind's universe.

All the places you used to live and all the people you used to love are gone. And so is the childhood version of yourself. You only have these sacred memories.

I grew up in a small Cape Cod house in Laketown. But when I was five, my family briefly lived in Chatham for a few months in the winter of 1982. It didn't work out, and we were able to move back into the same Laketown house after it didn't sell.

My time in Chatham was brief, and my memories from that house are sparse. You could almost convince me that I dreamed it all up.

Last week when my brother was in town, we took my sister and dad to Chatham to visit the house. And sure enough, it was still there. 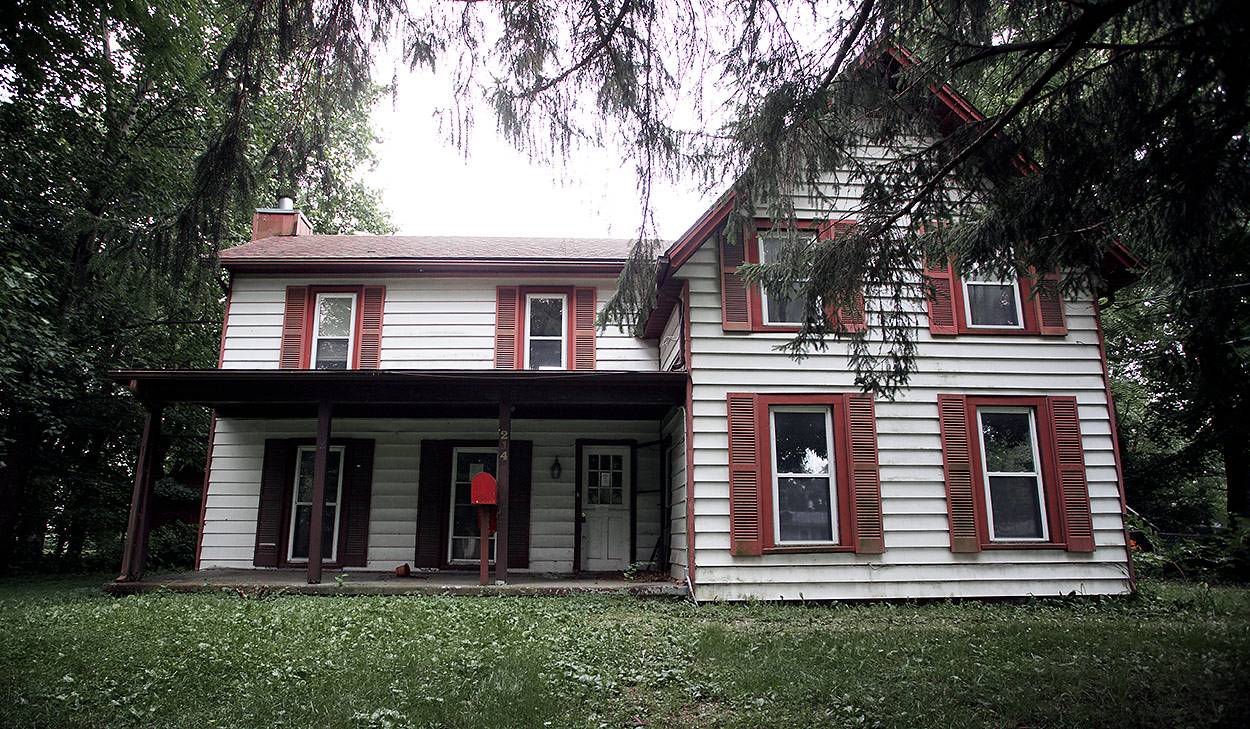 The yard was terribly overgrown, and there was a sign posted on the door. The house was sitting unoccupied, which gave us a good opportunity to walk around and take photos. As we walked, we shared memories of the neighborhood. My sister was only three and has almost no memories of this house. 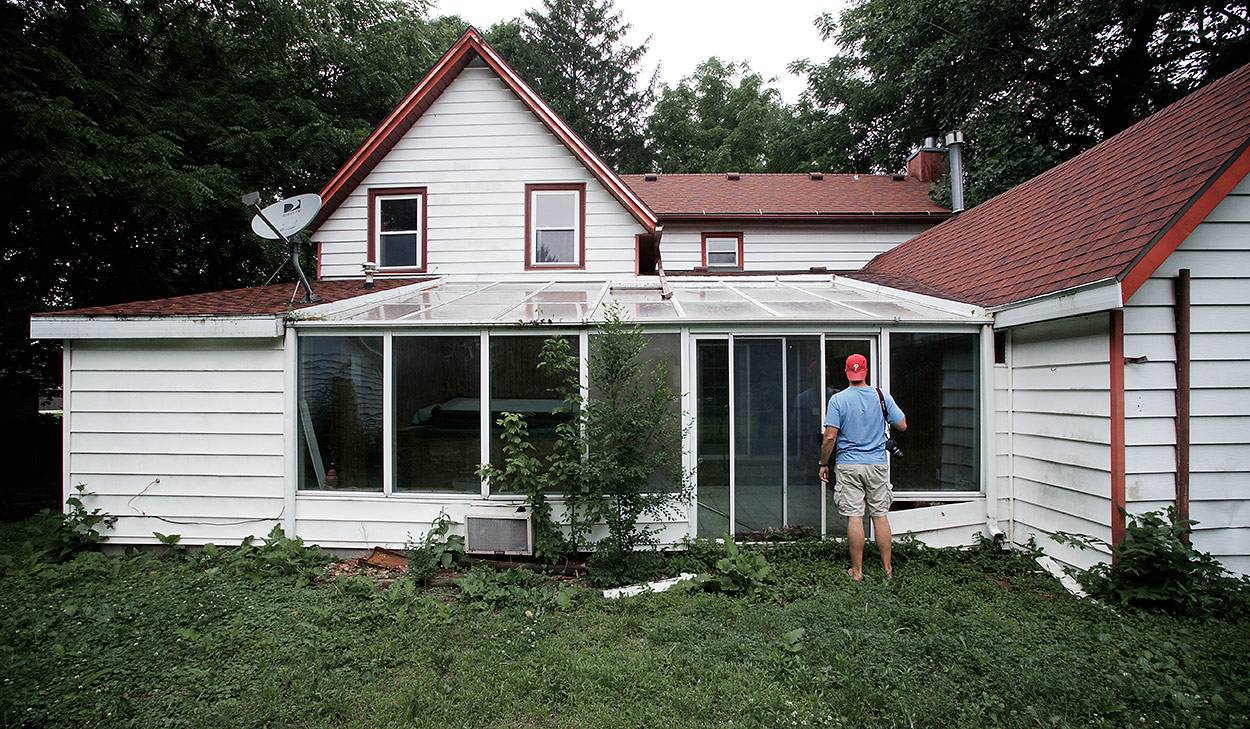 Walking around to the back, we discovered a sunroom that had been added. When we bought the house, there was a wooden barn in the backyard that my dad flattened. There was also an above ground swimming pool with all the cleanliness and warmth of a muddy swamp. 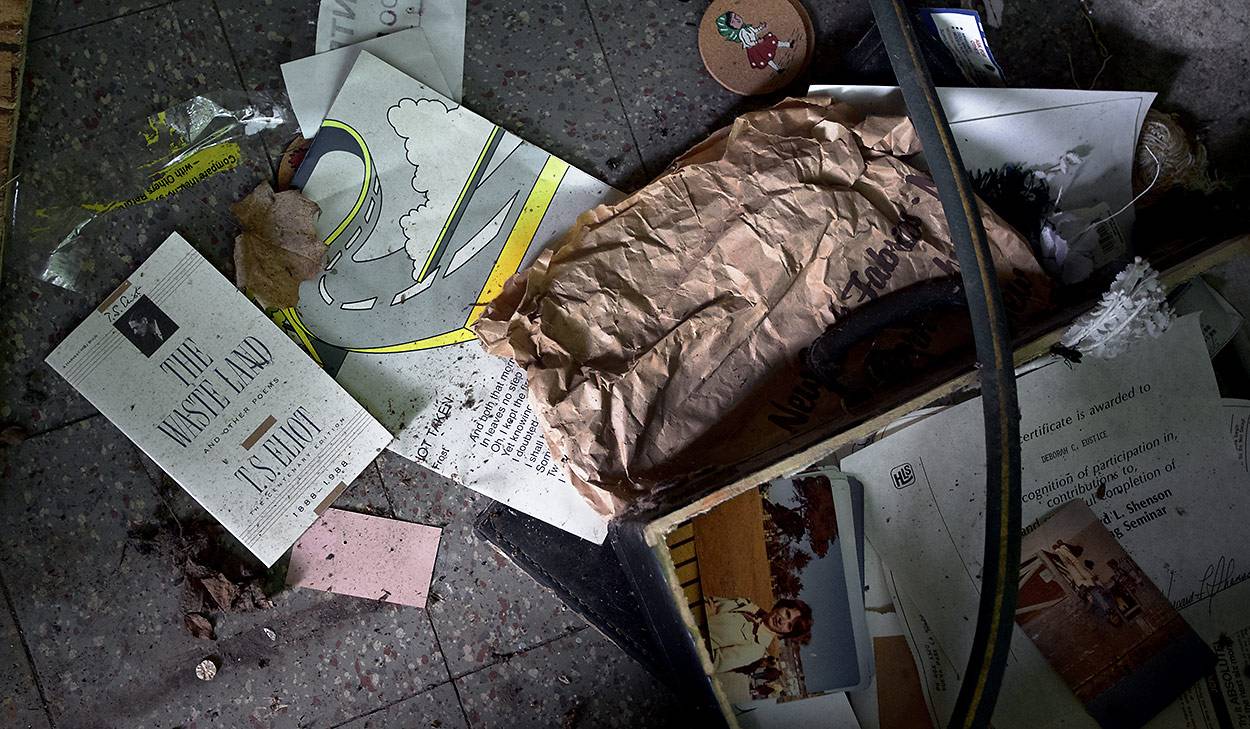 We were fortunate to find an unlocked door, and we went in for a tour.

The previous owners appear to have left in haste, leaving behind several little treasures, including some family photos and this fittingly-titled novel.

It was absolutely bizarre standing in this house that has only existed in the most distant of memories for decades. It was like visiting the location of an old film, to find it somewhat familiar and yet completely foreign, all at the same time.

Picture your childhood home. After your family moved out, it sat vacant, exposed to the elements, for decades. As an adult, you go back, to find it overgrown and much smaller than you remember. This is how it felt, though clearly there had been some redecorating done in the nineties.

The kitchen above is where my brother nearly died from choking on a piece of hard candy at Christmas. My dad saved his life on that floor. 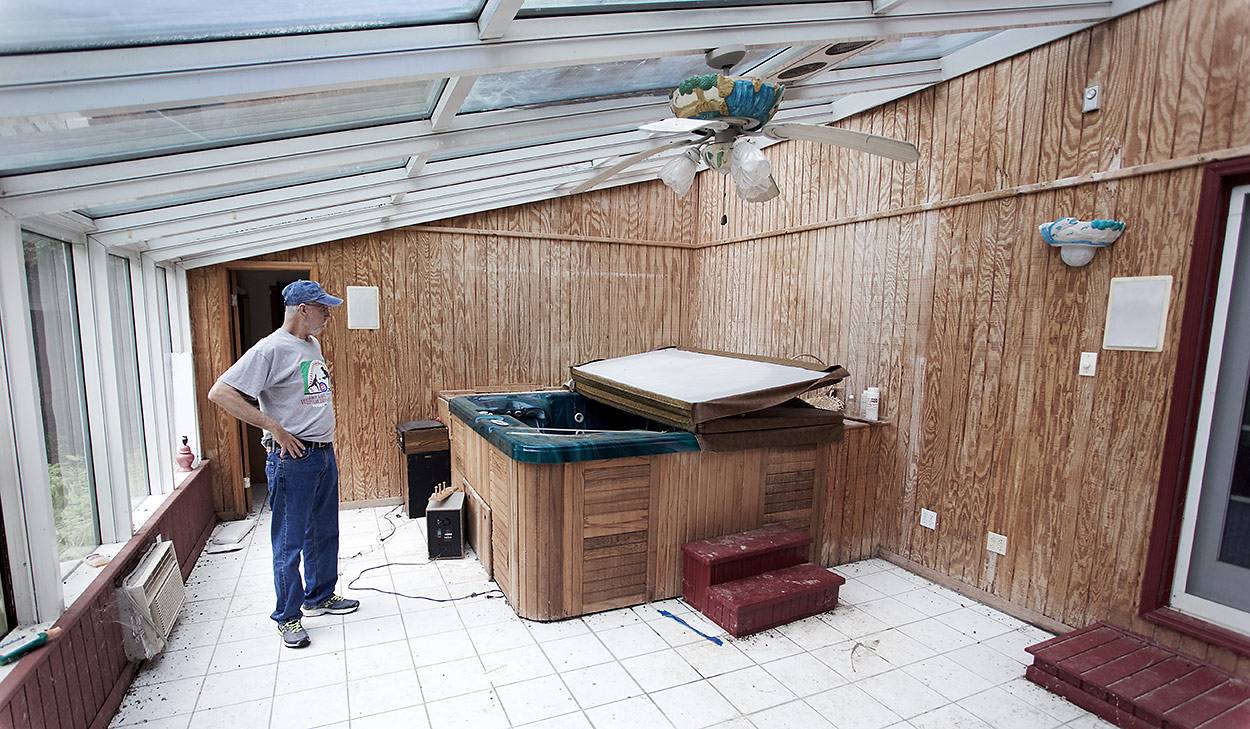 That's my dad, having a big WTF moment upon discovering of a hot tub in the sun room that used to be our back yard. 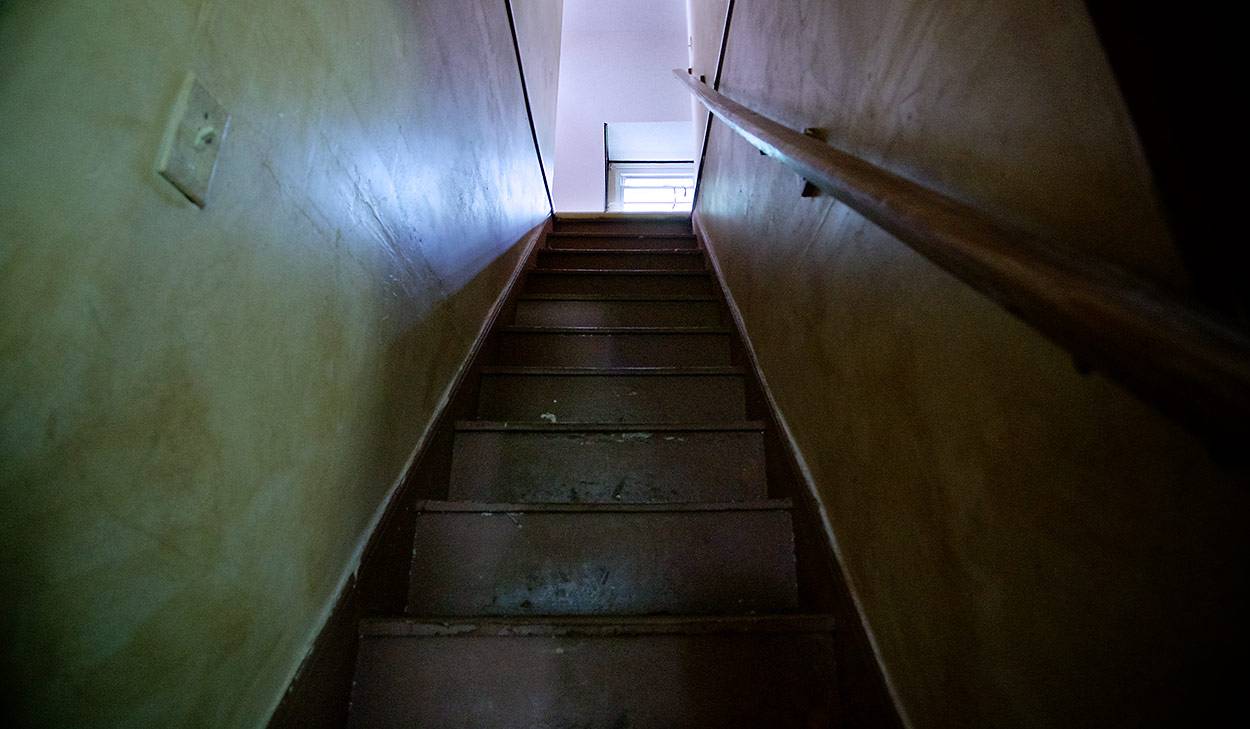 I haven't yet mentioned one of the critical memories I do have of this house: it was haunted. And I don't mean just weird-noises-in-the-night haunted, though it was certainly that. I'm talking axe murderers, monsters under the bed, ghosts at the top of the stairs, all that shit. We used to sit at the bottom of these stairs looking up, waiting for a ghost to appear. And it fucking would. Though it was probably the dog.

Before we ventured into the house, we spoke with a neighbor who was curiously watching us take photos. She mentioned — before I said a word about it — that everyone who has lived there has said the upstairs is haunted. 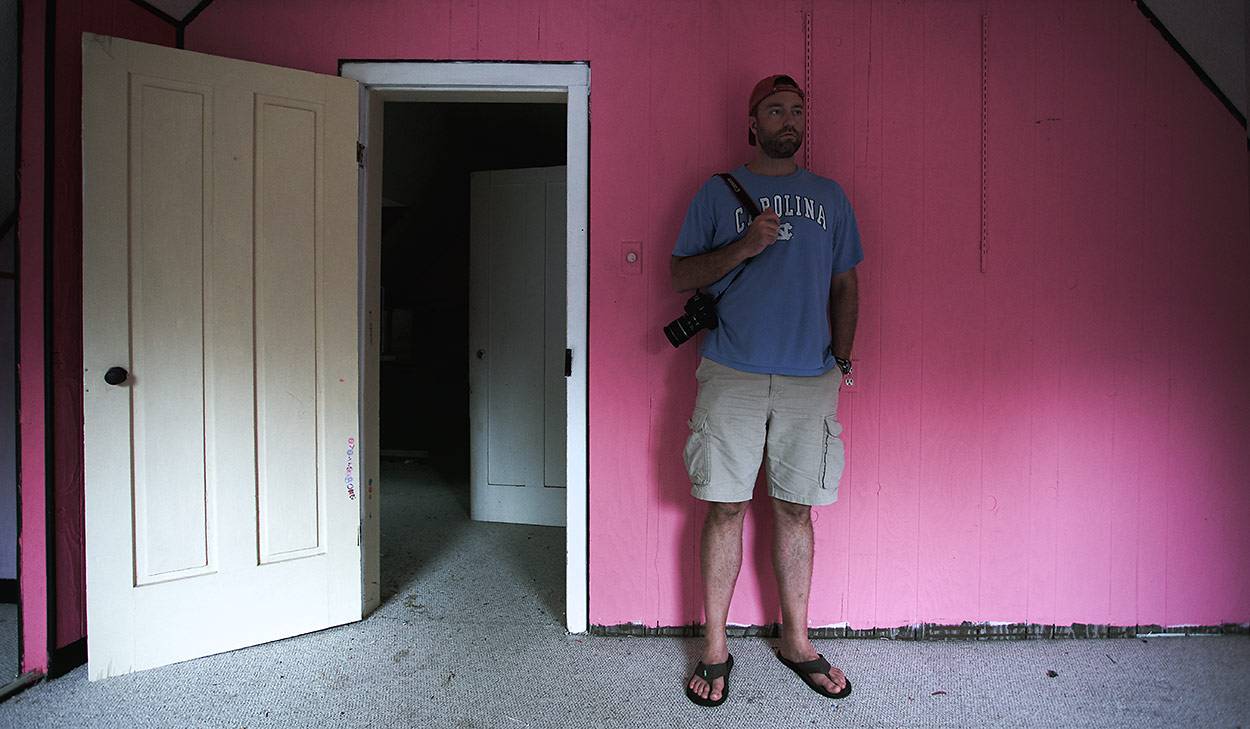 My siblings and I had our own bedrooms upstairs. I think this was my sister's. It was haunted.

I remember one dark winter day when my mom was in bed, sick. Dad was out in the backyard chopping wood. I was scared, so I climbed into bed with Mom. But there were strange bumps in the bedspread, and I felt them, and they felt like severed human fingers! This did not provide comfort.

I later found out they were part of the heating blanket. But I still blame the ghosts. 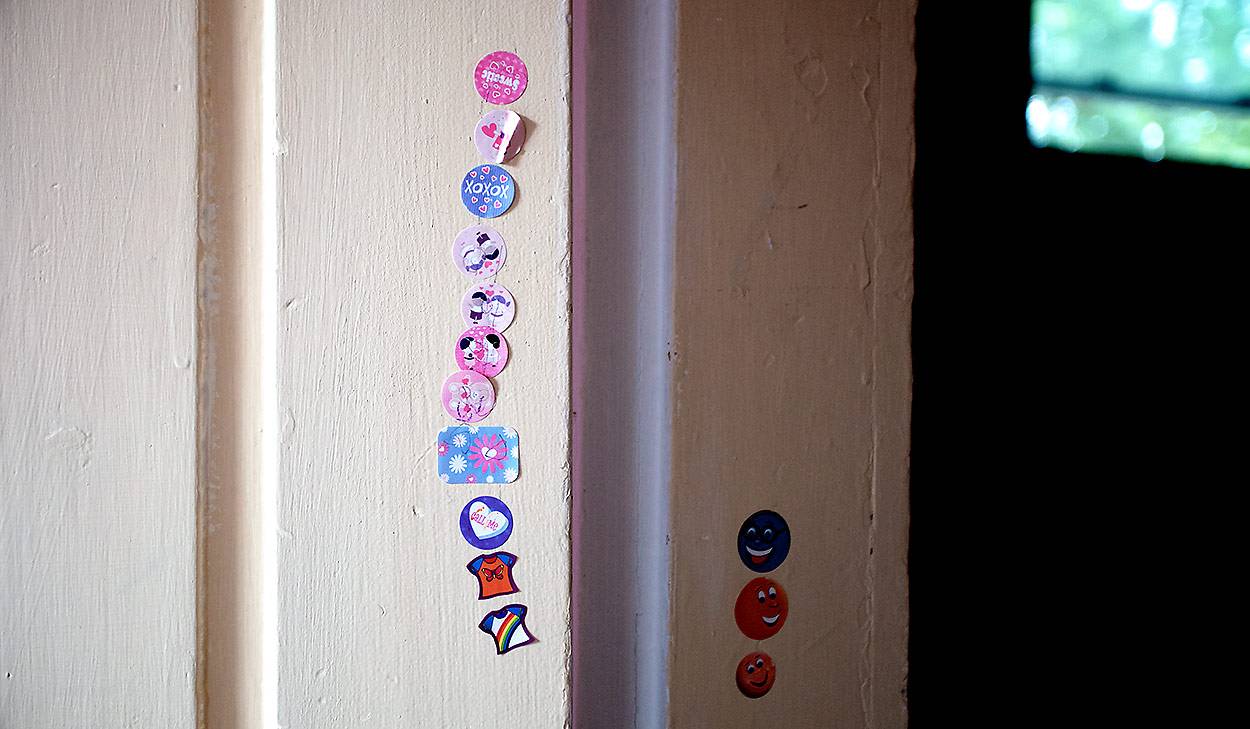 I can only imagine the horror stories of the children that have lived in this house since. I hope some of them made it out alive. 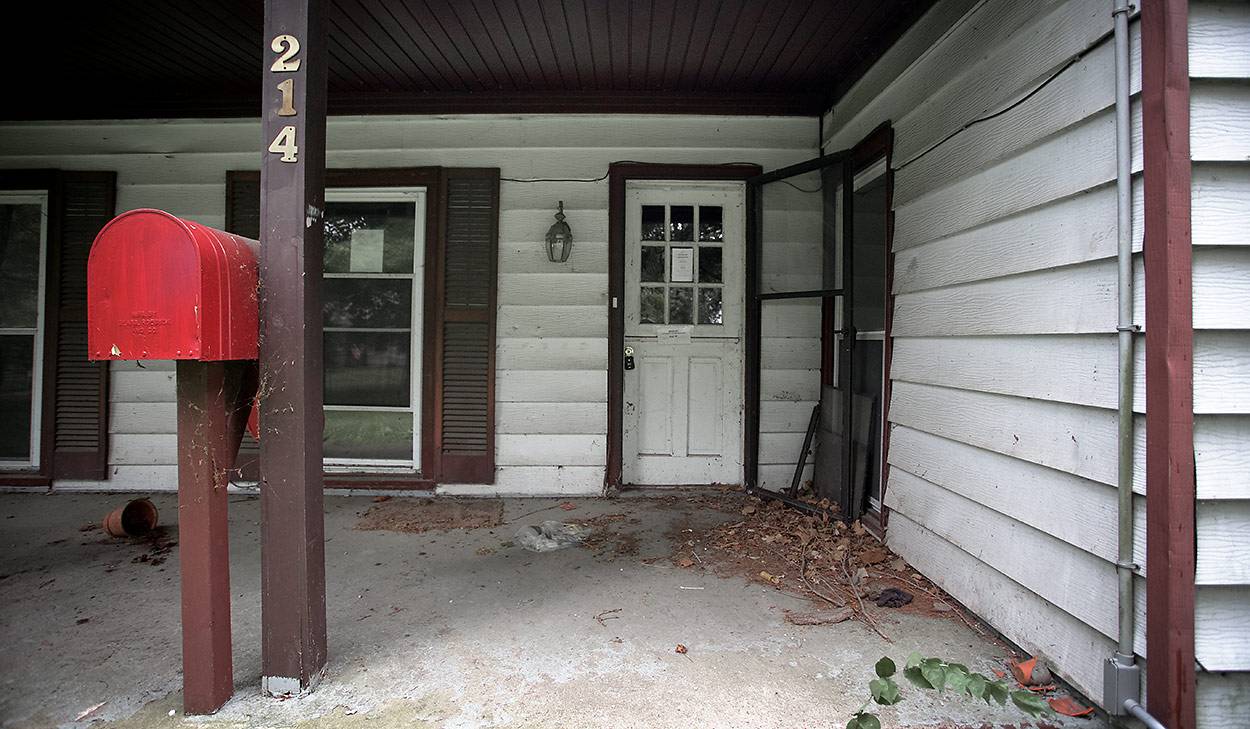 We survived the tour and said goodbye to our childhood home.

The house has been vacant for years, and it will likely be flattened someday. It was such a treat to visit it once more and relive some of those distant memories. It was also abundantly clear that the version of this house that used to be my home now only lives in memories.

Creepy. At first I was like that looks like a nice fix-er-upper. Then I got to part about the haunted upstairs. Burn that thing to the ground!

It is weird looking at a location where you have spent much of your time growing up. I occasionally drive by houses where my family has lived in Springfield. I can recall a ton of detailed memories, but as I look at the houses they look so foreign.

Thanks for walk thru of your creepy but brief childhood home.

The T.S. Eliot photo was great — I thought about taking that same shot when we first walked in; then I realized that you were a step behind me and would take and edit that photo better than I could. Besides, I wanted to see the kitchen (Dave's mention of me almost dying in the kitchen on Christmas is completely true, by the way — I remember it vividly).

I also love the stickers on the door frame and door in Sally's old room. I walked right past those and didn't notice them until I saw your photo of me looking pensive and melancholy in her old room.