On the Fourth of July, I woke up early and headed out on a bike ride. I wasn't sure where I was going, but I brought along the camera just in case. And as per usual, I underestimated how far I would ride, and thus brought along only one bottle of water and no food or cash.

Whenever a camera is involved, I tend to overpack on gear and neglect the necessities. When I went backpacking in the desert one time, I opted to leave behind my second gallon of water in exchange for a tripod and extra lens. Near the end of the second day, I would have gladly traded my 70-200 2.8 for a bottle of water. 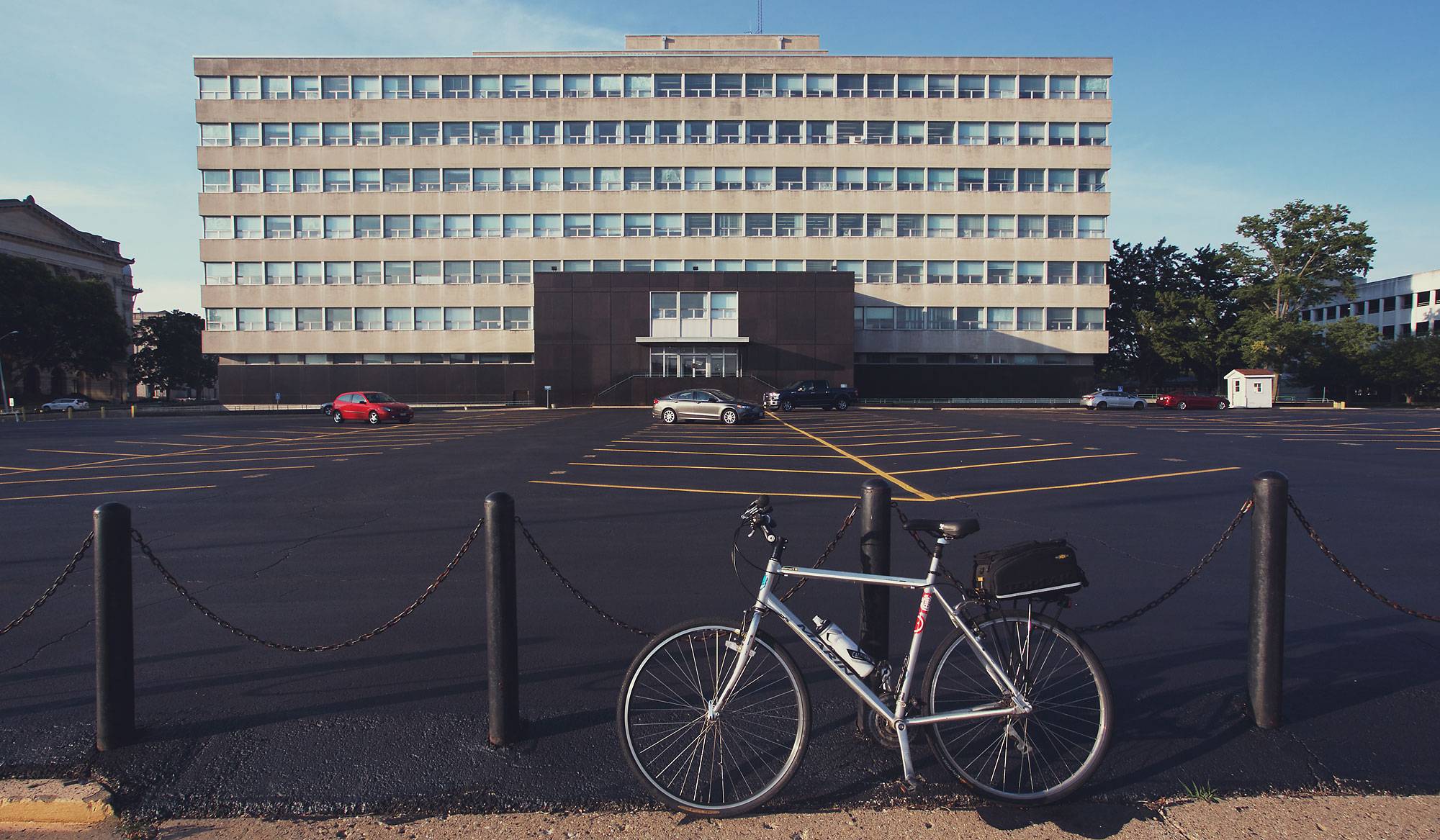 Anyway, I started out downtown. It was early, and the streets were empty. It was an enjoyable tour of downtown as I passed the Capitol, the Hilton (it will always be the Hilton), Lincoln's Home and my favorite coffee shop, Wm. Van's. Then I headed south towards UIS. 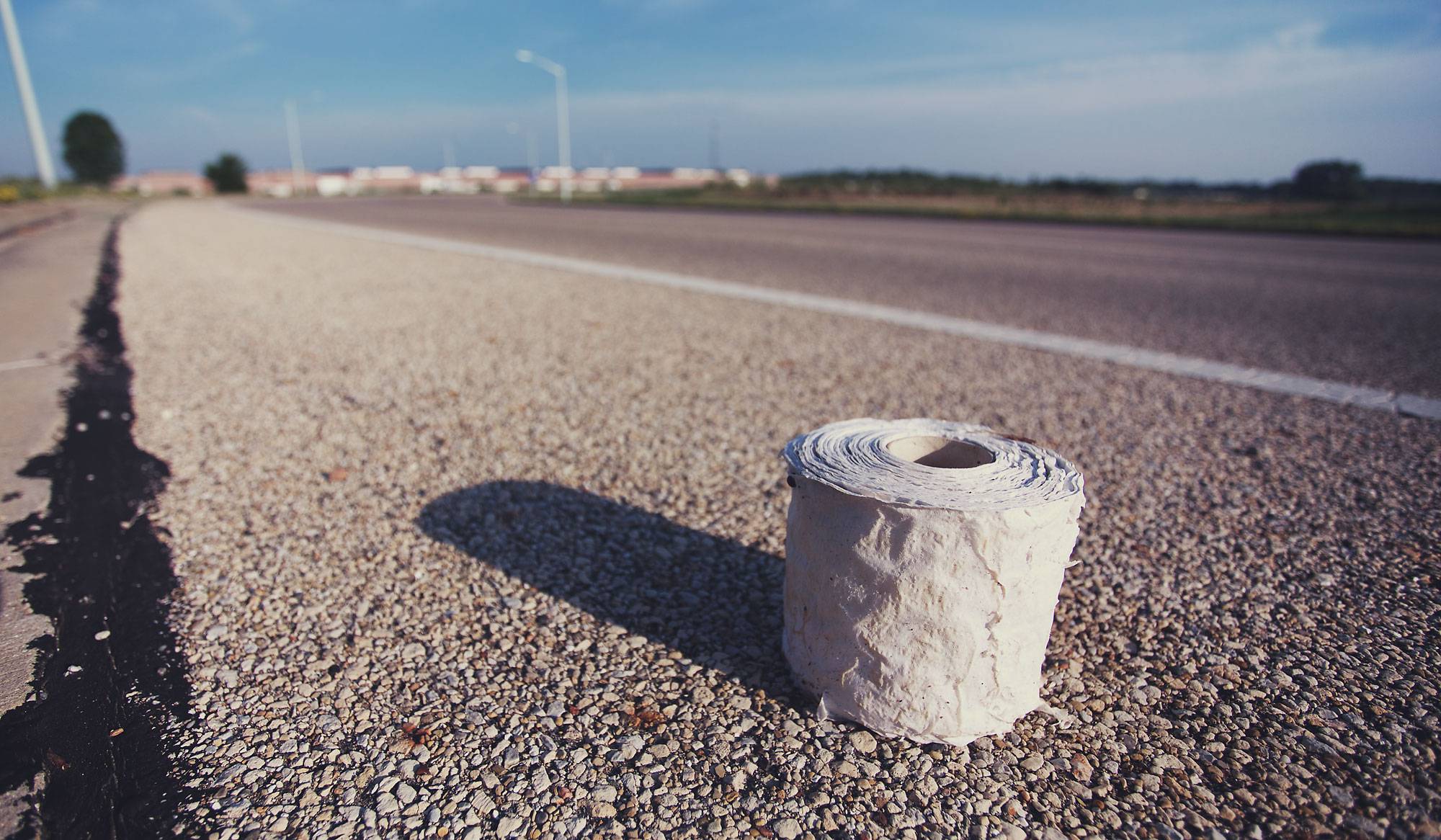 Getting through Springfield on a bike isn't necessarily an enjoyable task. Bike lanes are hit and miss and are often riddled with gravel, garbage and glass. That said, I haven't encountered much hostility from drivers in the past year or so. I'm not sure if this is by chance or something has changed. It used to be a common occurrence to get honked at, have trash thrown at you and have people yell at you to get off the road. 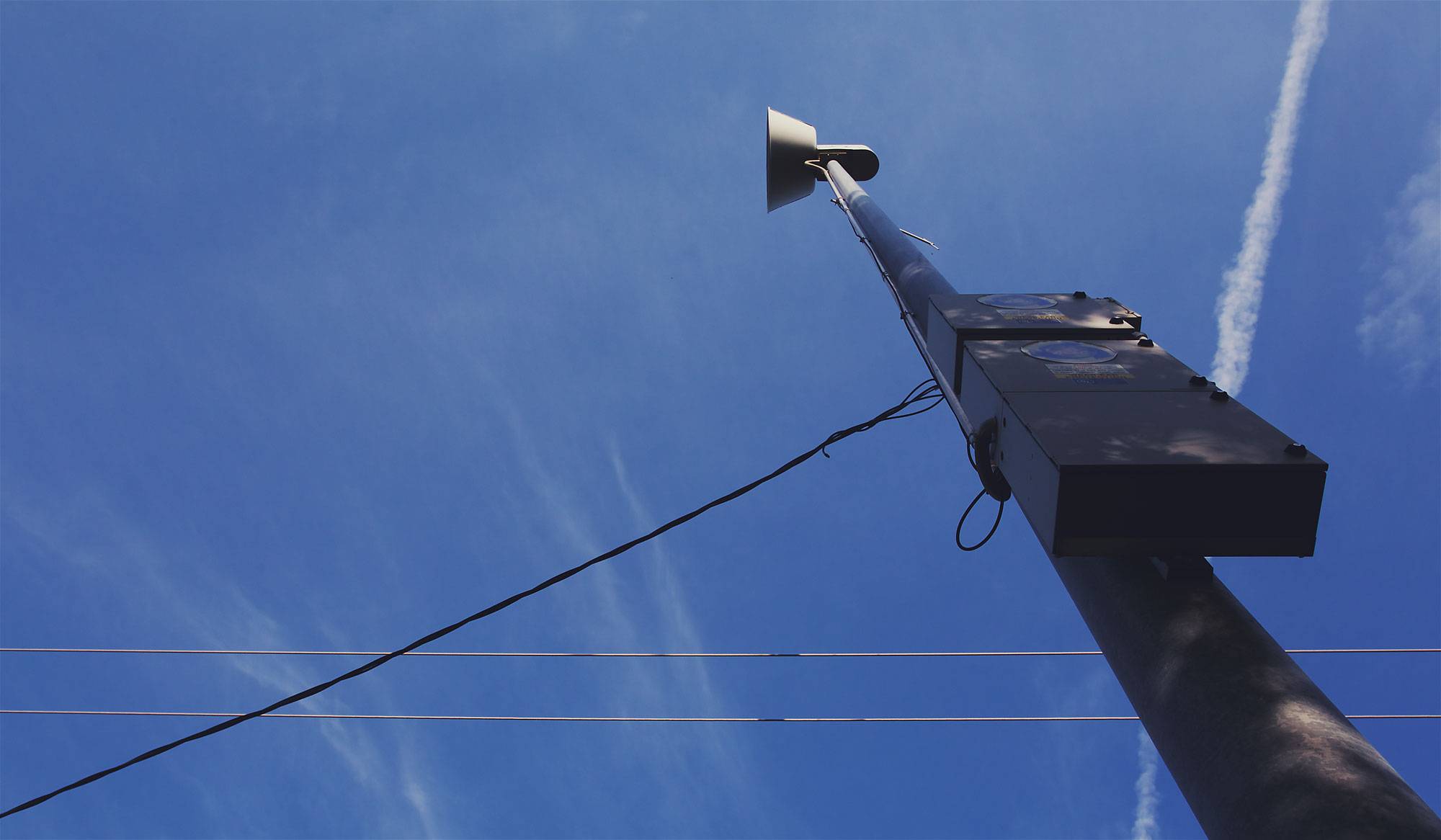 After riding through UIS, I found a nice bike path that connected to Lincoln Land Community College. It led behind the main buildings to a pond that I didn't know existed, and in the morning light it was beautiful. You'll have to imagine it though, because I didn't stop for a photo. 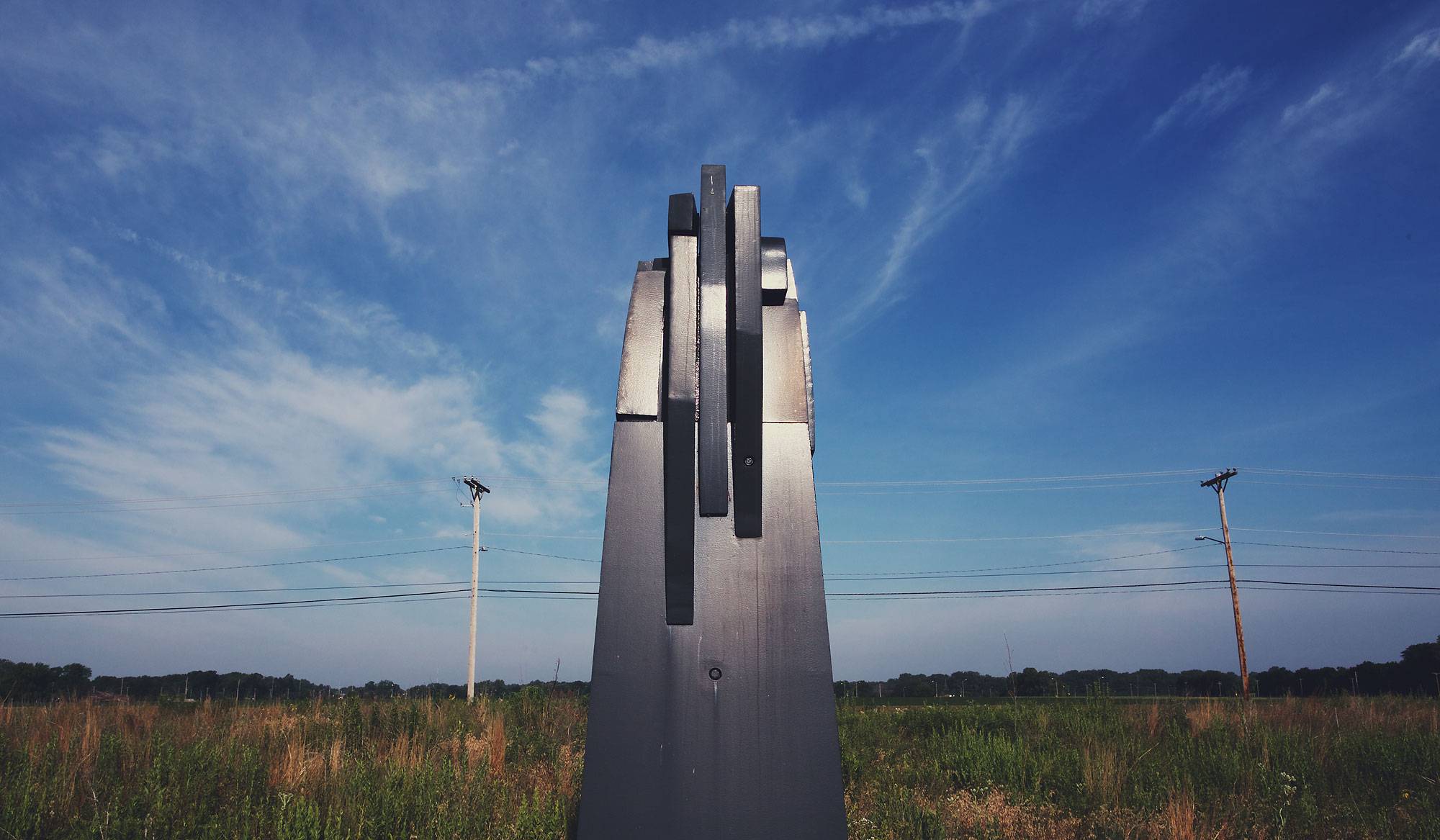 I did, however, stop to take some photos of Michael Dunbar's Steel Head sculpture at LLCC. When I was interviewing him for a video earlier this year, he told me a fun story about this piece. It was designed so that the pieces could fit into a van that his friend owned. They pulled up to the Capitol, waved at a security officer, then when he passed, they quickly unloaded and assembled the sculpture on an empty concrete pad. It was fully assembled when the officer came back around, and by the next time he came by, they had it back in the van. 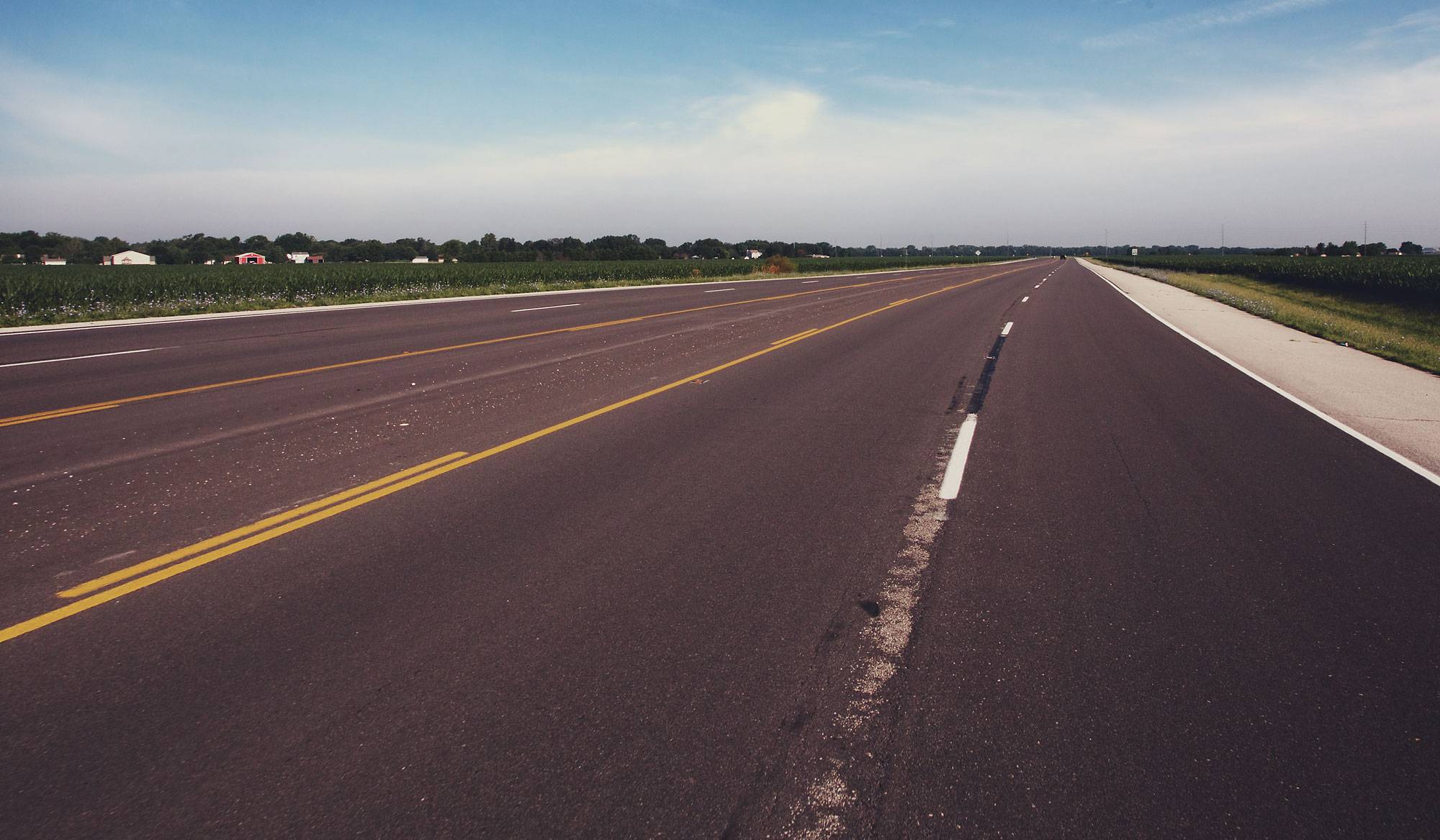 After leaving LLCC, I was still feeling good, so I headed down Toronto Road toward the Interurban Trail. The roads were still almost empty. I was wondering if the whole city just decided to sleep in on the holiday. The bike trail proved this theory wrong though, as it was filled with joggers, runners and bikers all the way through Chatham.

After passing through Chatham, I remembered back to a Springfield Century I rode in years ago where the route took us over an old section of Route 66 that was paved in brick. I decided this would be a nice destination for the ride. 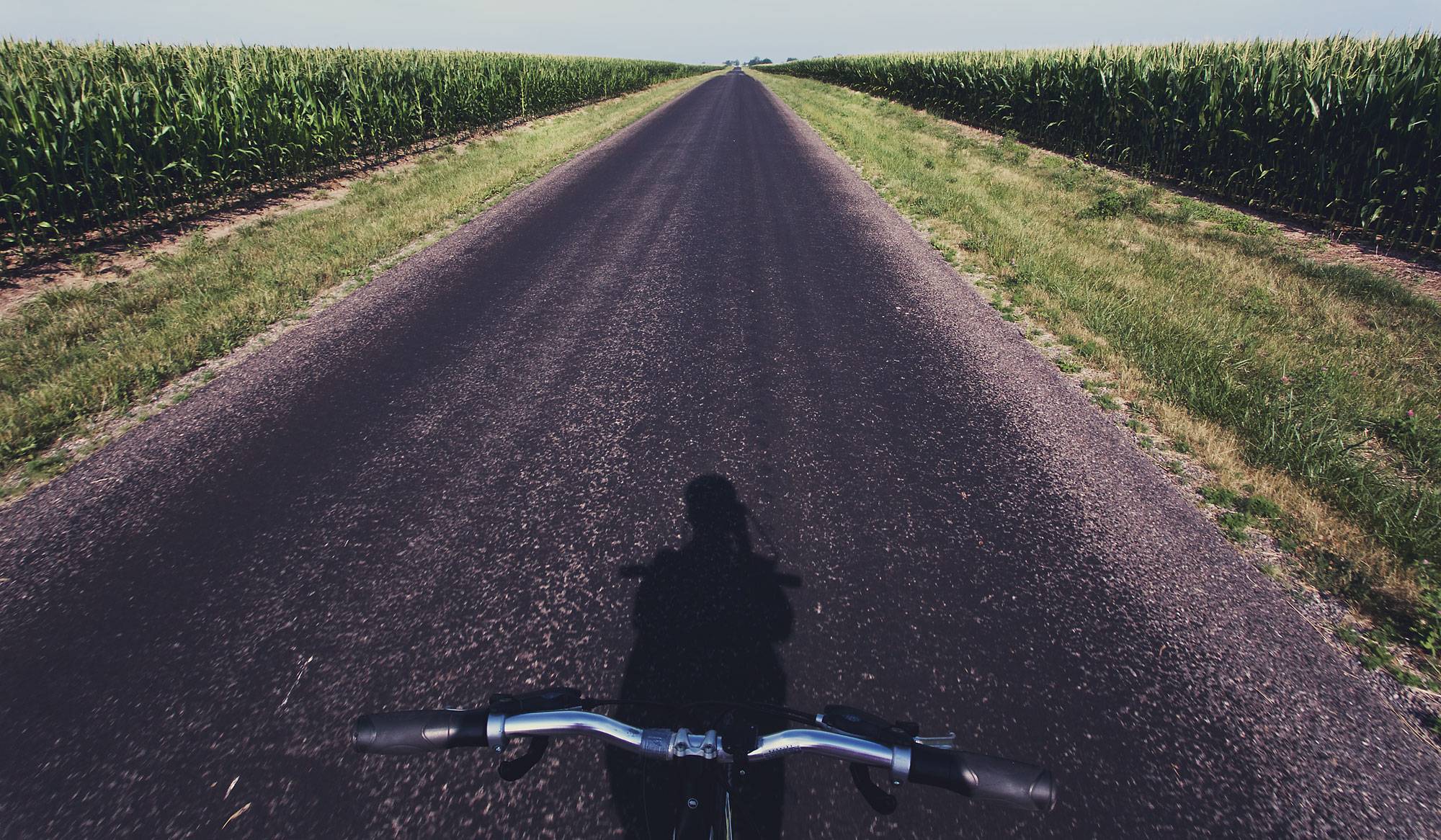 Out in the country, on a small road between cornfields, I started getting tired. But I knew I was close, so I kept pushing on. 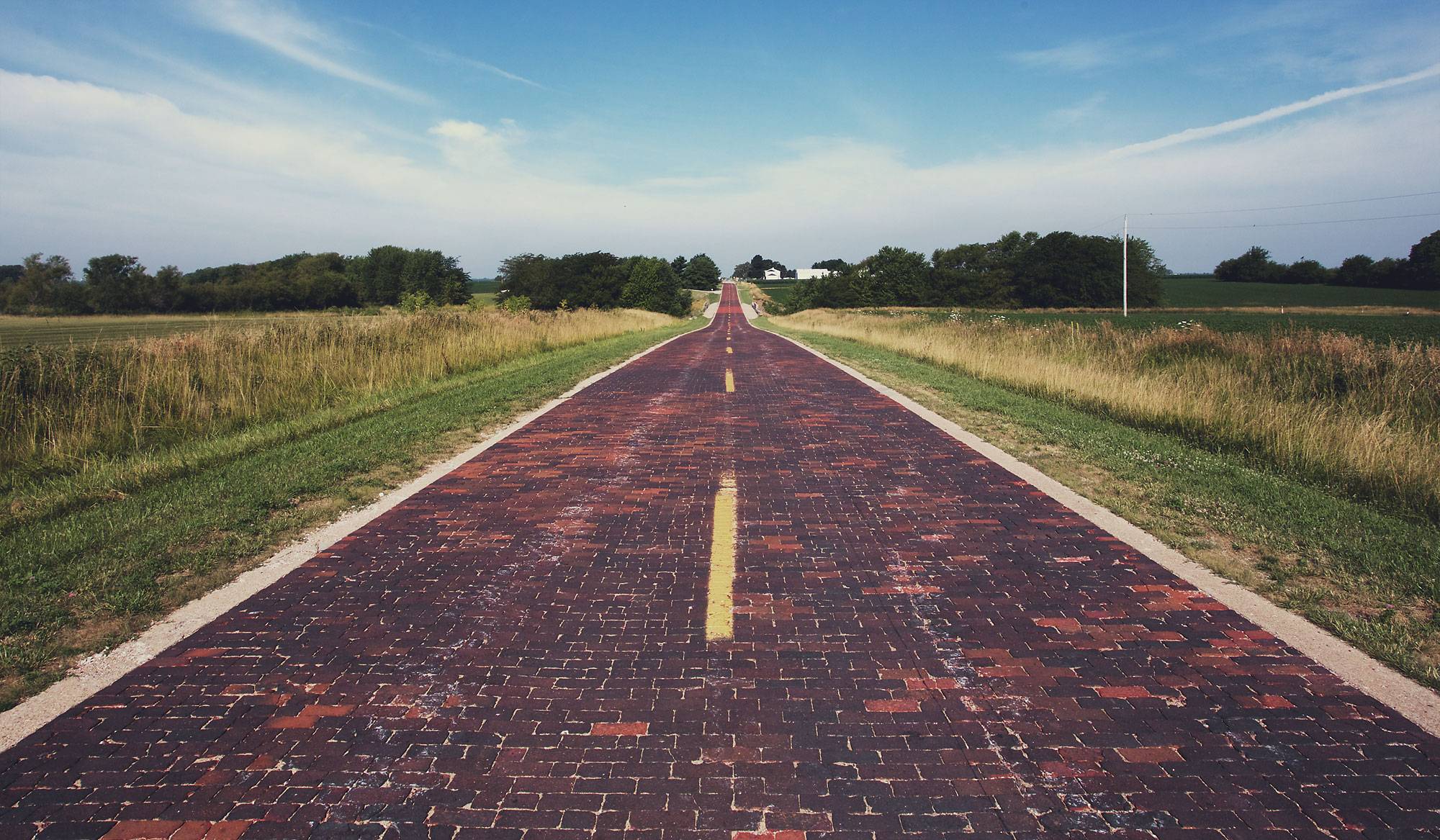 Finally, just when I crossed Route 4 outside of Auburn, I saw the bricks. I stopped for several photos, drank what little water I had left and took one last photo of the bike. 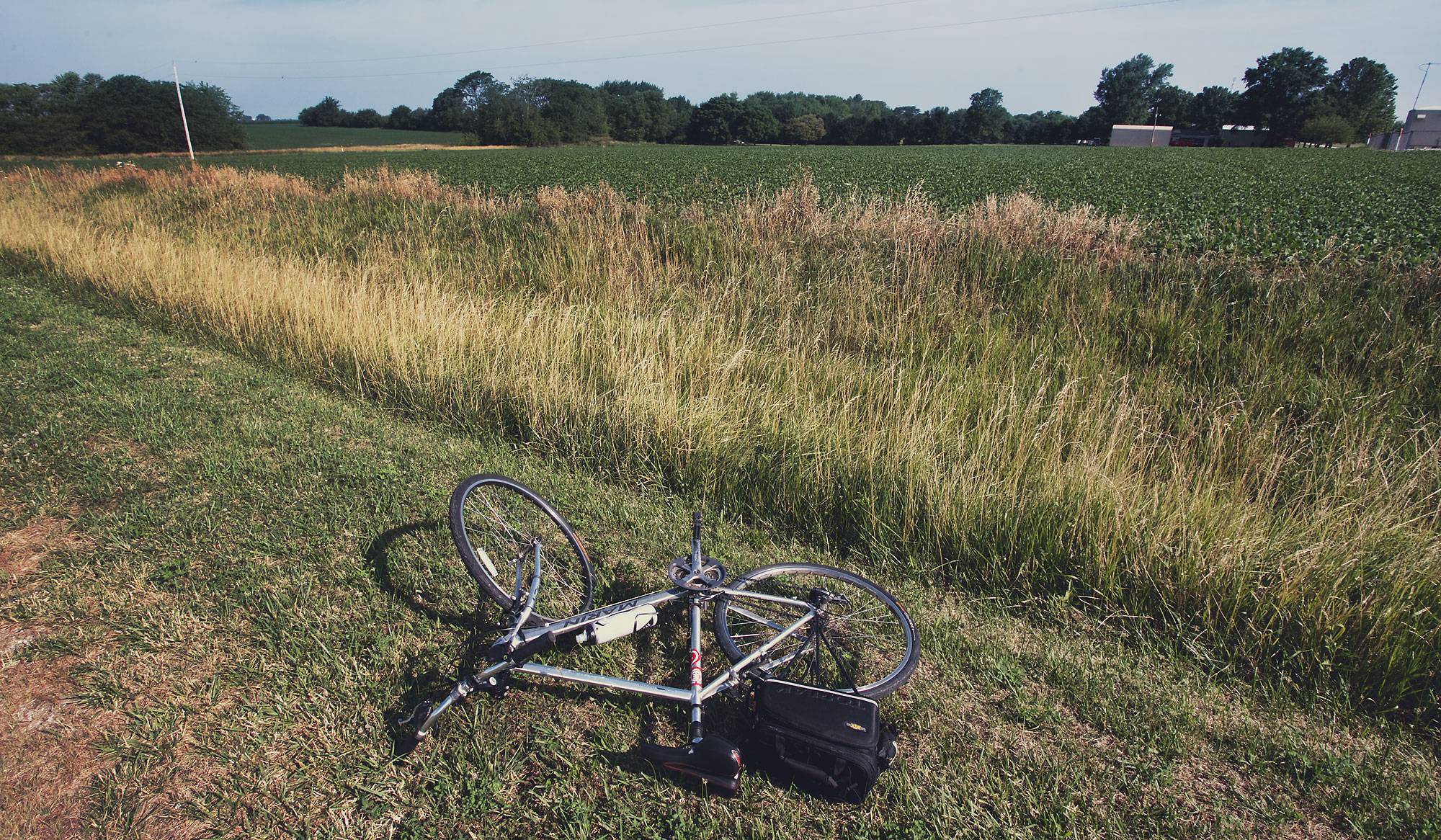 As soon as I turned to head back, my legs started to ache. I realized I had been benefiting from a bit of a tail wind perhaps. In any case, it was a long (but still enjoyable) ride home.

Back at home, my app told me I had ridden 40.15 miles in 2 hours and 57 minutes and burned 2500 calories. I made no haste in eating and drinking as much as possible to make up for that, though I still couldn't finish the giant pancake at Charlie Parker's. Someday I will. And you can bet I will blog about it.

This was my fourth longest ride since buying this bike 11 years ago. I've logged over 5,000 miles on it and still ride it almost every day, mostly to and from the coffee shop. It's been though a lot, including giving me a couple concussions, many bruises and being hit by a large CWLP truck (I finally learned my lesson and ride with a helmet now). And it's always happy to get back on the road for the next adventure.

I love that old section of Rt 66 outside of Auburn. I bike out that way every so often just to feel the rumble of the bricks.

Rick McCrank and Frank Gerwer visited that exact section of Rt 66 for the Viceland show "Abandoned." They skated it for about 10 mins in the rain. Rick did a backside big spin.

You should have skipped the ride come over here in the wee hours on the fourth and tried to help me catch a rabbit in my basement. You would have burned the same amount of calories and maybe the bunny would have survived.

I ended up on that section of route 66 the other day when I was going to make the turn back to Chatham. I missed that turn and ended up on the old red bricks. It's a great section to photos at, but I was super thirsty and continued to the Hucks for refreshments.