The space between an uppercase 'T' and a lowercase 'o.' The way that a truly italicized font is not simply slanted. The difference between kerning and tracking.

Typography is an art of details.

Every time I move, one of the first things I do is identify a good wall for a mural. Such was the case with my recent move into a rental house (with an understanding landlord). The wall that drew my interest was a peculiar shaped wall in the dining room. It started square at the base but slanted upwards to follow the line of the staircase.

Hannah and I discussed various ideas for the mural. We started with a painting, as naturally that would be a good way to cover the entire wall. Then we discussed a pop art portrait of Lincoln. That was followed by the idea of a large-scale reproduction of a newspaper's front page, possibly requiring a large print to be adhered like wallpaper. I contacted a local printer, but unfortunately their largest print size was four inches too narrow to cover the width of the wall.

Hannah suggested that instead of a newspaper page, we could reproduce a single page from a novel. I instantly saw it in my mind - beautiful typography covering the entire wall, bleeding just past the edges to make the wall feel even larger. A classic black and white palette would match anything in the room. I was sold. 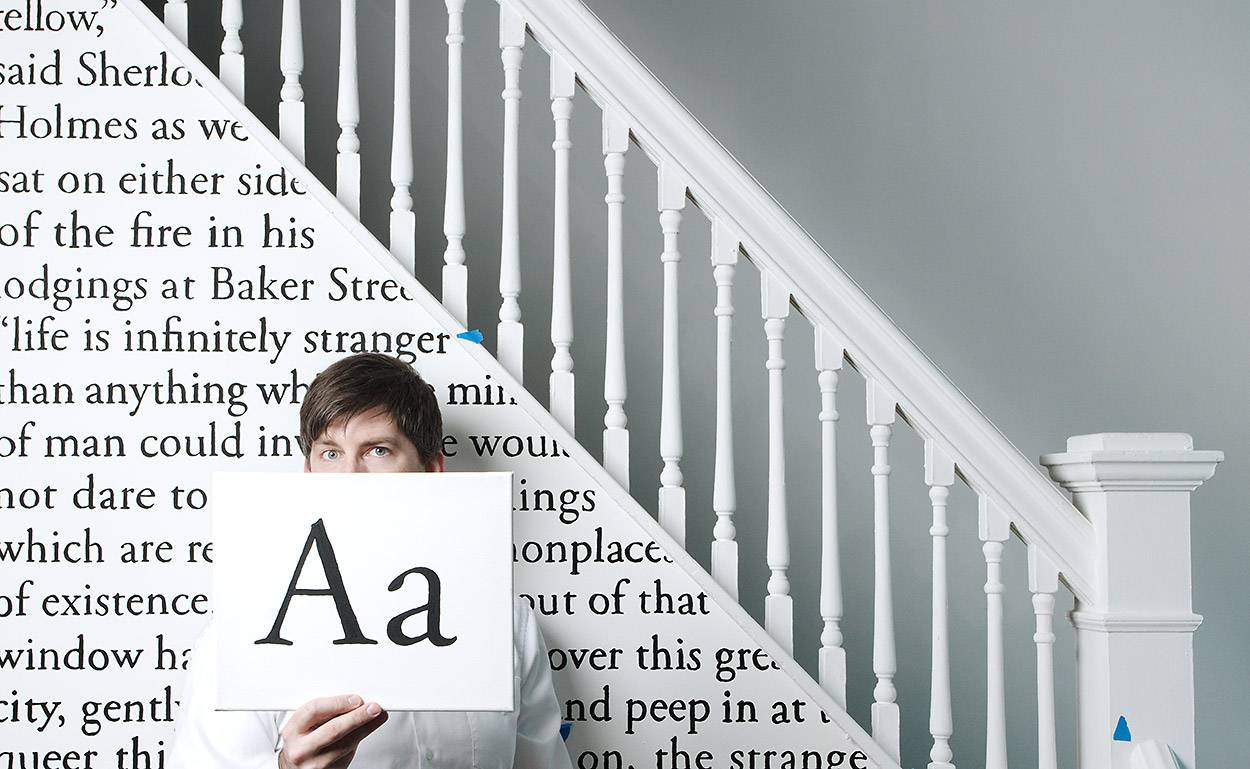 While Hannah searched for just the perfect novel and page, I started brainstorming the visuals. To me, this was a visual arts project. The wall size and shape was a given, but there were seemingly limitless options when it came to typeface, text size, line spacing and character weight. My graphic arts background was going to come in handy.

After searching various novels for a few days, we settled on the first page of "A Case of Identity," the third story in "The Adventures of Sherlock Holmes" by Sir Arthur Conan Doyle. This particular story and page didn't have any particular significance to either of us (other than both of us being fans of BBC's "Sherlock"), but I was instantly drawn to the opening paragraph:

“My dear fellow,” said Sherlock Holmes as we sat on either side of the fire in his lodgings at Baker Street, “life is infinitely stranger than anything which the mind of man could invent. We would not dare to conceive the things which are really mere commonplaces of existence. If we could fly out of that window hand in hand, hover over this great city, gently remove the roofs, and peep in at the queer things which are going on, the strange coincidences, the plannings, the cross-purposes, the wonderful chains of events, working through generations, and leading to the most outré results, it would make all fiction with its conventionalities and foreseen conclusions most stale and unprofitable.”

With the text chosen, it was time to select a typeface. We both wanted a classic serif font, resembling what might have been used in turn-of-the-century publishing. After narrowing the choices to Adobe Garamond Pro and New Century Schoolbook, we went with Garamond.

I recreated the shape of the wall on my computer, set the text and projected it onto the wall using a digital projector. While this may seem to take away the magic, this is a project of details. And there was much work to be done.

For starters, I couldn't get the projector far enough away from the wall to fill it up at once. I have to paint in sections, moving the projector down the wall as I work. And getting the projector just right is an art unto itself. For example, when I move from one end of the room to the other, the shift of my weight is just enough to throw the projector's alignment off (it's an old house). 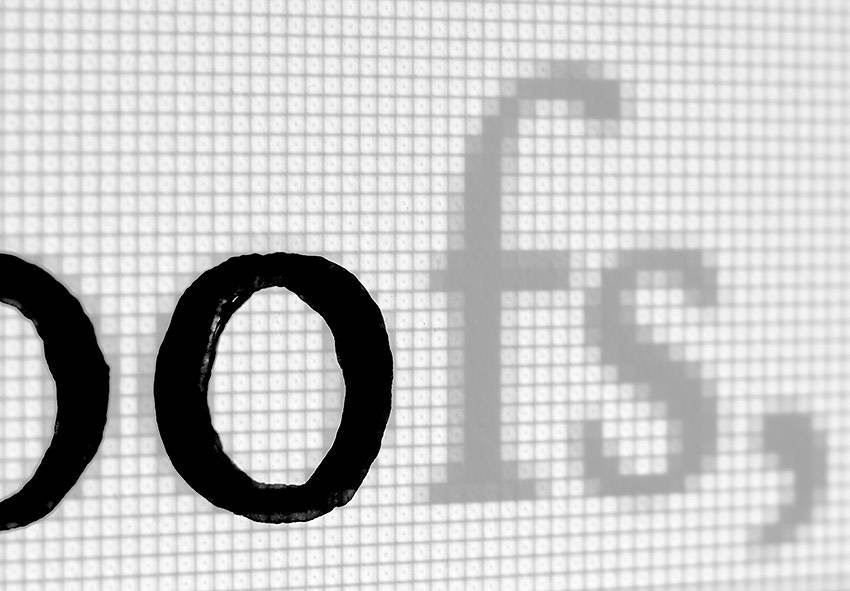 The projected text is pixelated.

One of the biggest problems is that the projector's resolution isn't high enough for me to see all the nuances of the font's serifs. It gives me a pixelated letter on the wall for placement, and on top of that I have to paint a more detailed letter by hand. And I'm constantly fighting my shadow.

Progress was slow at first, but I am halfway down the wall. The hours I've spent with Adobe Garamond Pro have really given me an appreciation for the font. Its serifs (the "feet" at the top and bottom of certain letters) have a lovely shape that you wouldn't notice at a normal font size. There is a subtle curve to them that is just perfect. There is also a very nice slope to the top of some lowercase letters.

I've memorized these details through repetition, and I've really fallen in love with this font in a way I did not expect. The font is dated all the way back to the mid-1500s, originally created by French type designer Claude Garamont. It has many variations, some of which you may have seen in Apple's marketing material (in the 80s and 90s) and Dr. Seuss books. 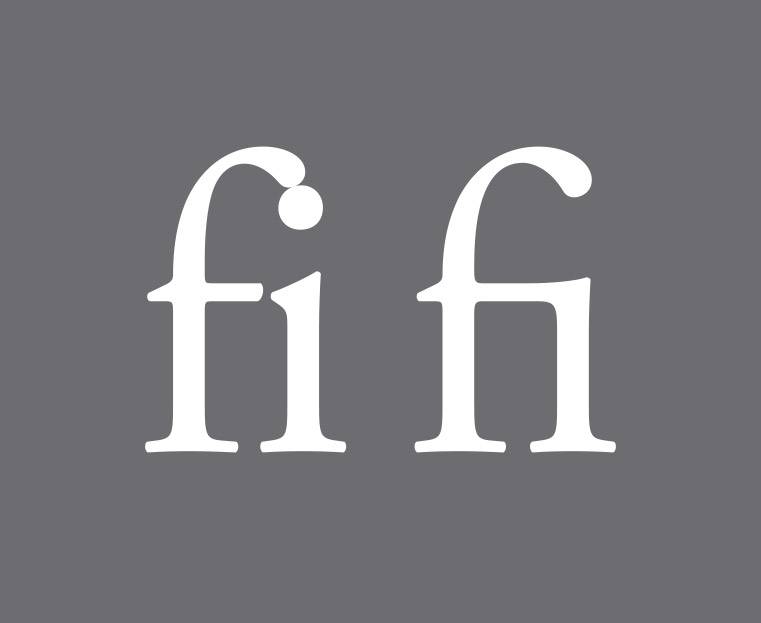 The lowercase 'f' and 'i' collide awkwardly. Replaced with a ligature (right), they play together nicely.

This particular font features a nice use of typographic ligatures, some of which appear in the passage we've chosen. Basically what this means is when some combinations of letters appear next to each other, they are replaced by an entirely different symbol. For example, when an 'f' is followed by an 'i,' the spacing of the letters would normally result in an awkward collision. Computers will attempt to replace the two letters with a separate single character that is a more aesthetically pleasing. It's a detail. But it's important.

As I make my way down the wall, I am creating yet another version of this famous font. I'm adding a slight thickness to the letters and am making subtle changes to better accommodate the hand-drawn nature of the painted characters. No, I will not be digitizing this into its own typeface. You will just have to come for a visit to see it for yourself.

Ok, blog-writing break over. Back to painting.

Great project! and great teamwork. I'd still be researching the perfect paragraph -

I love everything about this!

Don't let Pinterest get a hold of this. Everyone will have text on their walls. Excellent font choice. #kerning

You make me smile! This looks fantastic. Knowing how you went about doing it makes it so much more special than what one might think at first seeing it.

Nice! Painting the characters on gives a nice letterpress individuality to each character

Would have been faster and simpler to have a vinyl adhesive print made. The type would have been sharp too. Easy to wipe it clean too.

This is such a great story; loved reading it. I'm curious — is that a little piece of painter's tape I see next to “stranger”?

Decor, literature, and a lesson in typography in one. Found thru Twitter. Thanks!

Yes, Jay, it is. I have several pieces of tape marking a grid that I use to help line up the text as I reposition the projector.

Considering the author, were you not tempted to use Baskerville?

Awesome project, Dave. Also, I really love the font you're using for this blog — it's so easy on the eyes. What are you using?

Colin - Baskerville was the first font I tried, but I just didn't like it. The weight of the characters isn't as consistent and pleasing to me as Garamond. And the capital 'W' in Garamond is classic.

Dave Rock - I'm using Raleway for the body font and Bitter for headlines. These are both Google fonts.

Found you through daring fireball and am really enjoying your choice of text and font and the whole idea. The font has a great 'antiqua' feel because of the inevitable imprecision: wonderful stuff. It reminded me of this: someone I used to work with was (maybe still is) running a blog called 'chasing home'. This entry is very special: http://chasinghome.org/2011/11/12/stair-poetry/

Typographically, a poor choice, and an ahistorical one. You should have traced an original page printed in original hot-metal type.

gorgeous! too bad you're not going to digitize it, I'd buy it in a heartbeat!

Interestingly enough, your hand painting replaces the pixilation of the computer screen with some of the subtle imperfections one might notice when looking at a printed page under high magnification.

Dave my wife was a creative director trained as a graphic artist who's first love was type. When we met said said I had to understand type to know her better and I did. Early on it was Bodoni and later Franklin Gothic. Sadly she passed a way not to long ago. She would have really loved this post and project and thoughts on type. Thank you

This is awesome! Too bad I can't mural my classroom walls. Nicely done!