Tim is on the way. Or so I hear, from the group of three white, middle-aged businessmen sitting nearby. Tim has the latest report, and he's on the way. Judging from the disinterested expression on the face of the man in the orange shirt on the receiving end of this pitch, Tim better hurry.

My hair is still wet, sweaty from the ride. It's a 1.4 mile bike ride from my house to Wm. Vans, which takes me about 7 and a half minutes, depending on the timing of the 4 traffic lights I pass. I no longer treat the red lights like stop signs, after being pulled over by a cop who is usually sitting in a vacant lot south of the museum. But I've learned the timing of the lights well enough to know that if I push hard when the light turns green by Boone's, I can beat the yellow at Edwards and Walnut heading home. 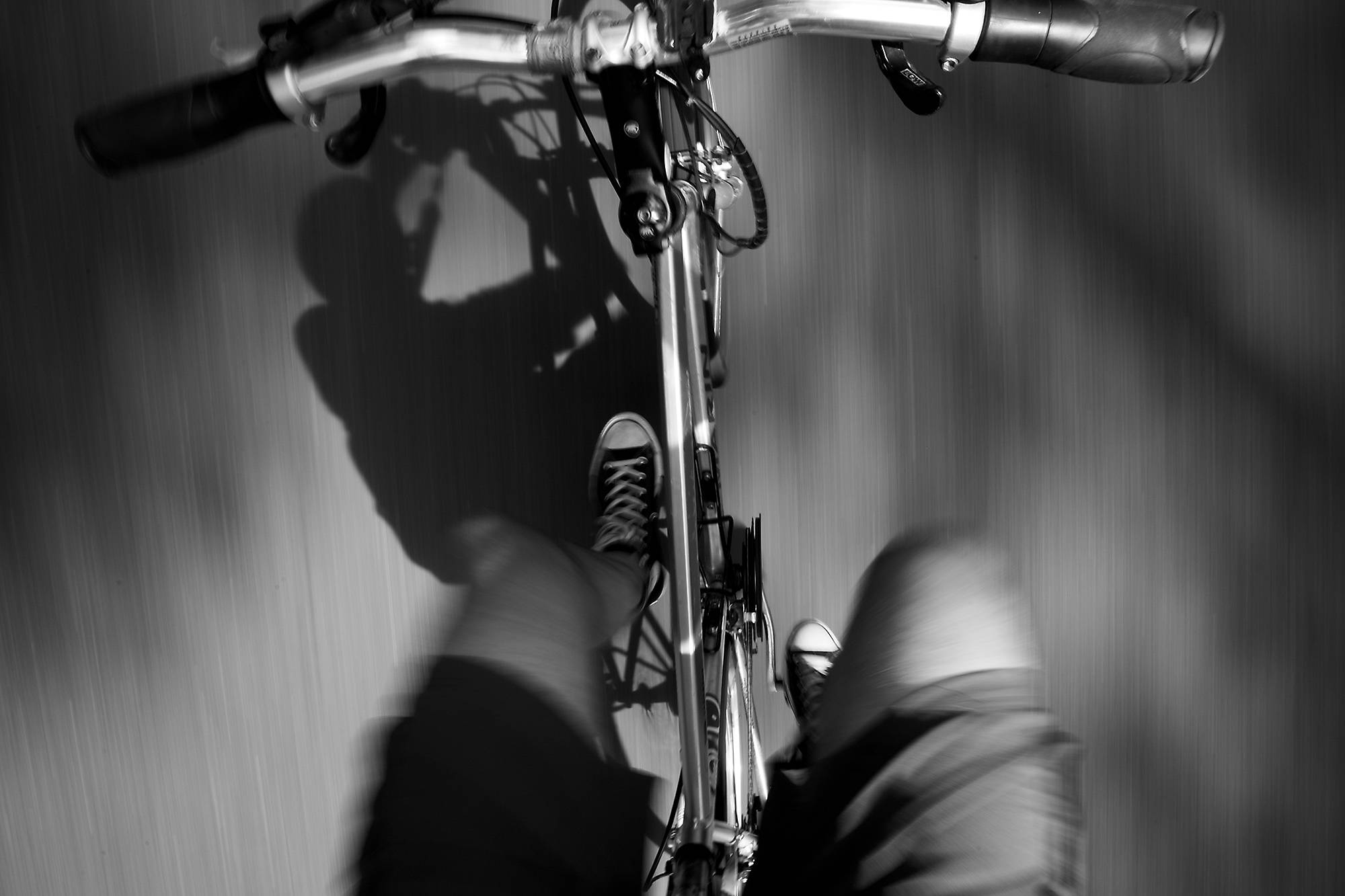 my daily commute, heading north on Glenwood towards Edwards

Tim's still not here. The man doing most of the talking, a fit but forgettable man of about 45, wearing one of those athletic polos with stripes down the short sleeves, seems nervous. His posture is firm, and his head projects forward as he speaks. He is filling the air with constant chatter, making sure the man in the orange shirt doesn't get a chance to say no. His friend joins the conversation. "I will do just about anything I can to avoid Home Depot." Which is interesting, because we don't have a Home Depot in Springfield. 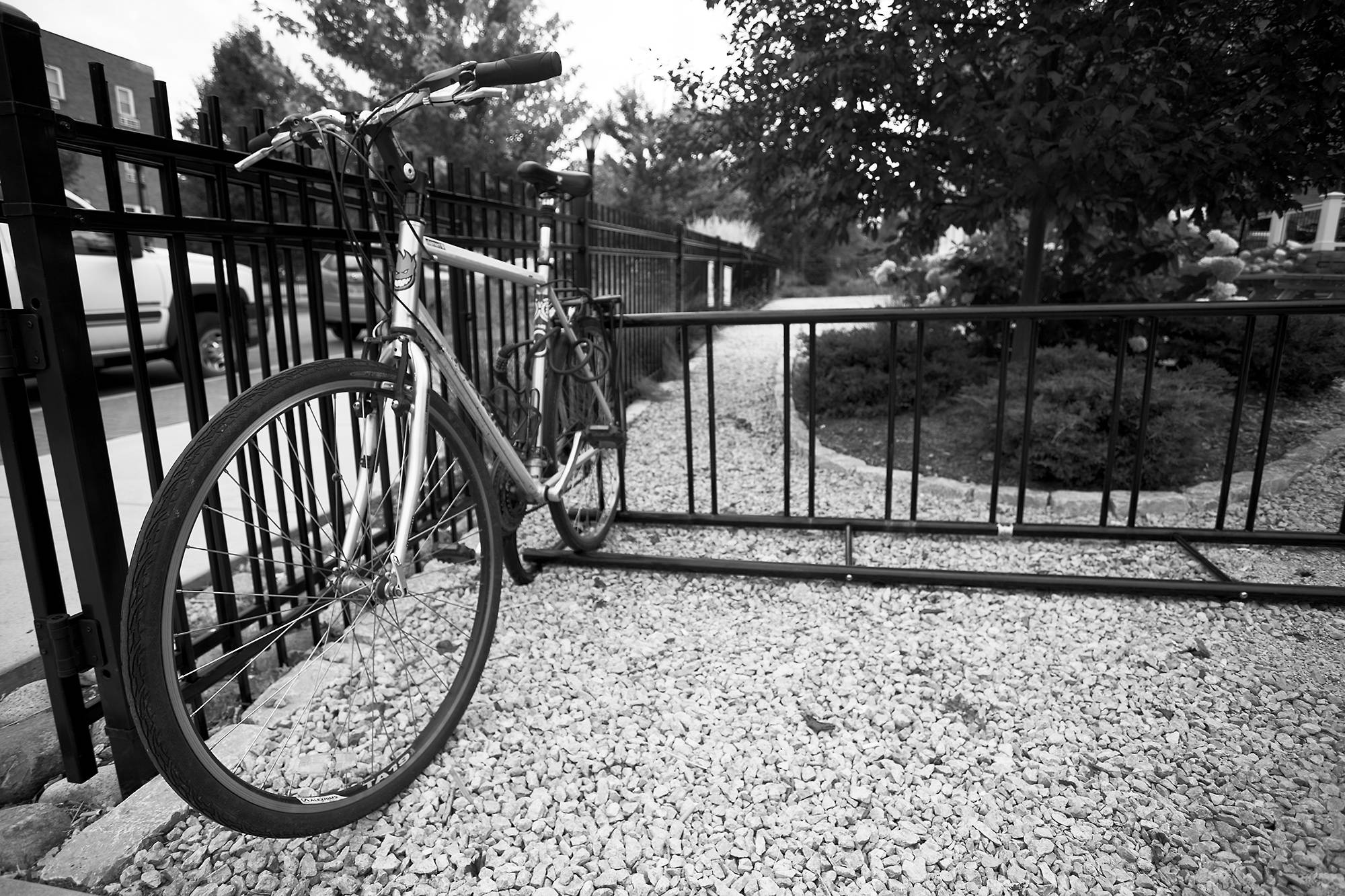 my parking spot outside Wm. Van's

I've done some of my best creative work at this coffee shop. I've been inspired by books I've read on the front porch, looking out on Lincoln's neighborhood, where you can see his ghost, walking the streets and wondering why all these tourists are looking at black rectangles in their hands. I've used this space to meet with friends, old and new. I've discovered new music thanks to their many Spotify playlists. We've filmed several things here. And I have had more than a few cups of coffee. 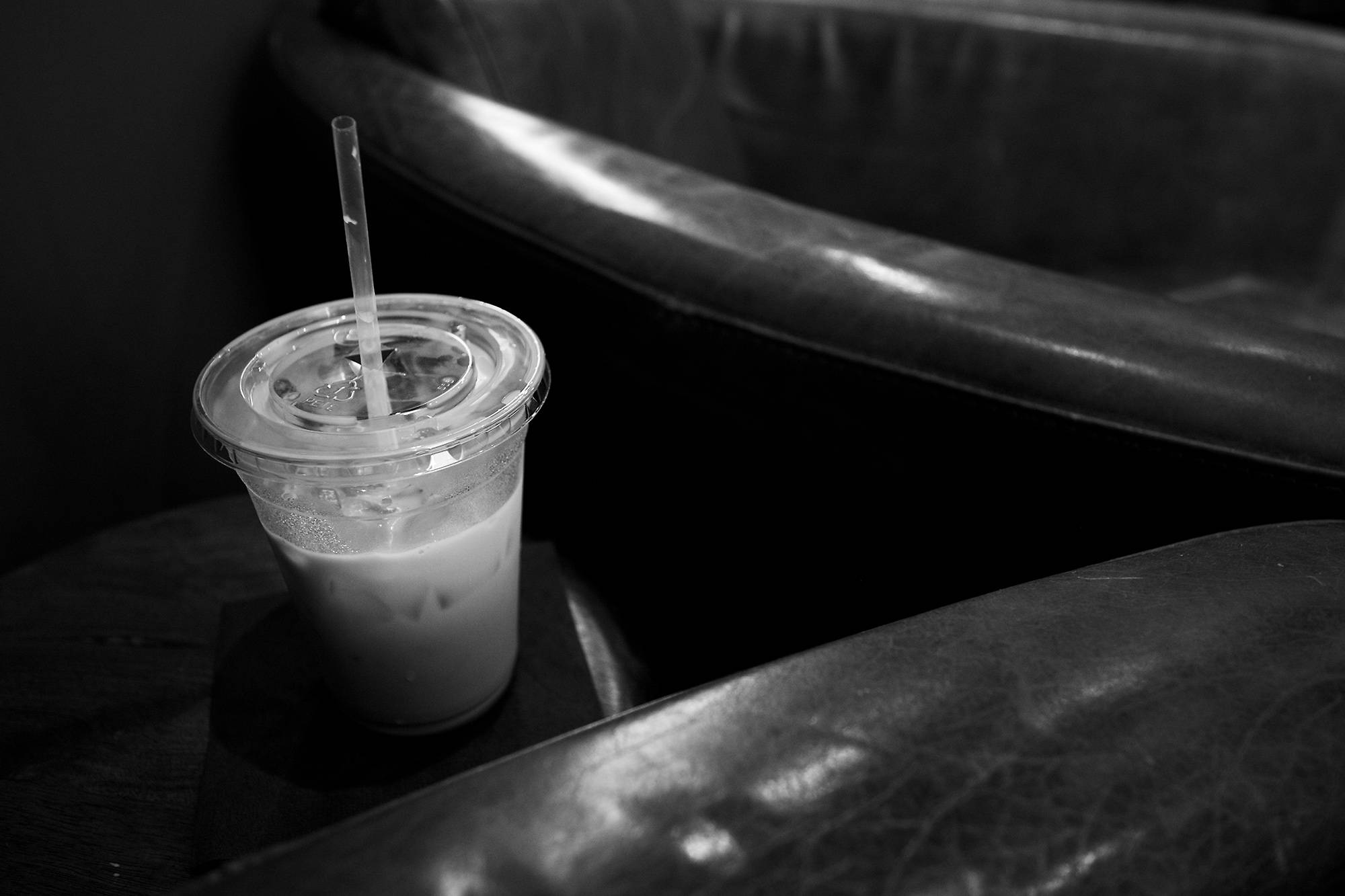 my new usual: medium iced coffee with cream and a little sugar

I used to drink white mochas, without exception. And they're excellent here. But now I'm on iced coffee, with cream and a little sugar. It's healthier I guess. I don't know.

Over the years, I've slowly fallen in love with this place. Whenever I travel, I seek out local coffee shops where I can sneak in a few hours of work, and nothing compares. Many have better internet. Many are easier to navigate for newcomers (I can't tell you how many times I've seen people get lost in Wm. Van's, somehow). Some have better coffee. But there just isn't anything like it. It's one of Springfield's treasures.

Tim just showed up. He's pushing 50 and is wearing an unbuttoned navy blazer. Arcade Fire is playing over the speakers, and Tim sits down. The man in the orange shirt sits patiently, with his hands clasped under his chin. "Where's the money in New Jersey?" he asks. 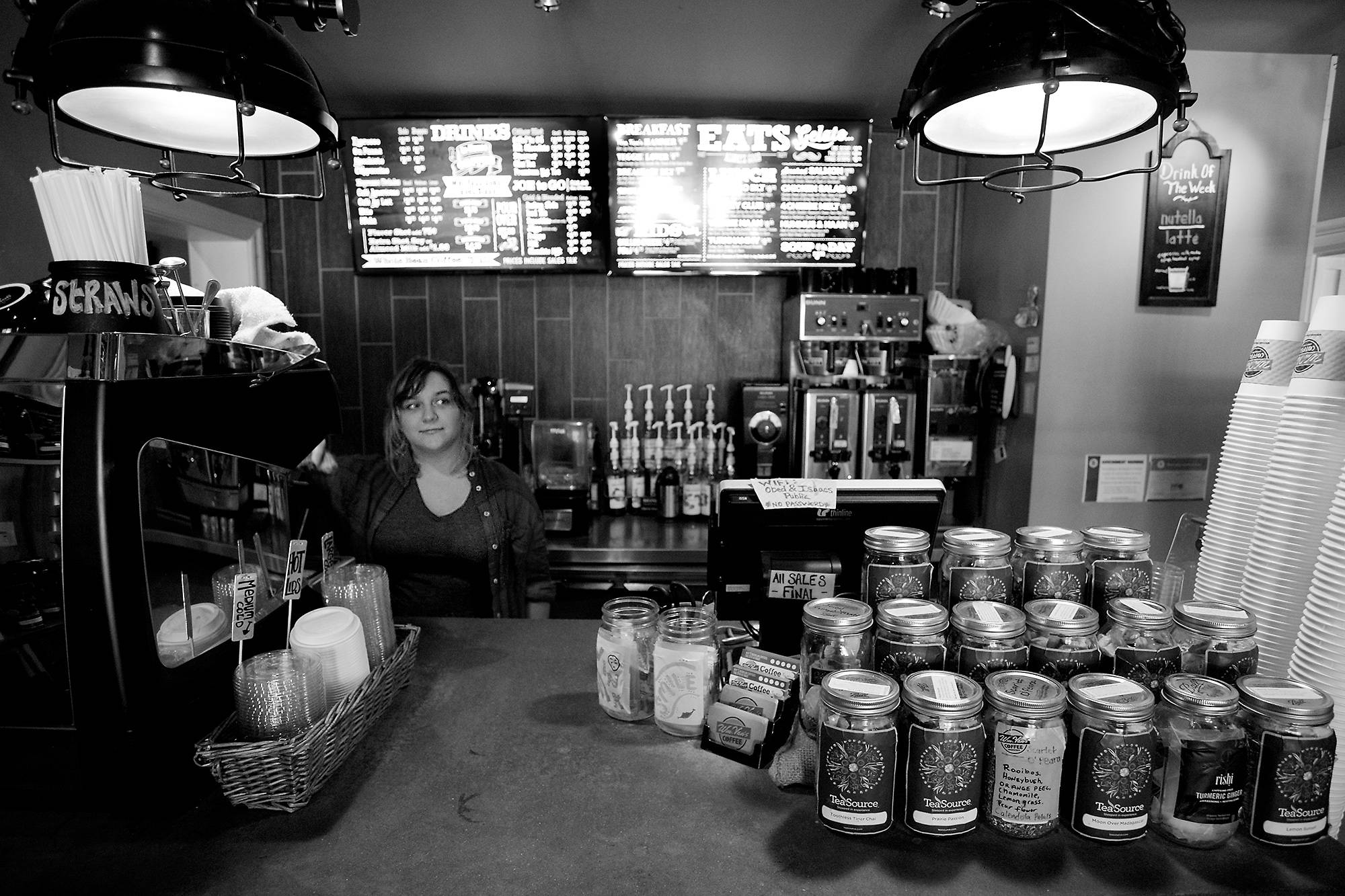 Alice, one of the many wonderful baristas

As much as I love this place for everything else, the people here are the best. The baristas know what I drink and are always, without fail, welcoming. The regulars — of which there are many — are interesting, too. I know some; others I just see frequently but know nothing about. The proximity to Lincoln's Home brings in a steady flow of tourists (who are usually the ones to get lost). There are a handful of groups that I see here often. The old guys who like to sit outside. The chatty ladies. The artists. The giddy college students.

The man in the athletic polo enthusiastically extends his hand to the man in the orange shirt, who meets the gesture with a firm handshake. They all quickly stand and exchange words, none of which I can hear over the music on my headphones. Today it's Slow Meadow, a self-titled ambient album that acts as a pleasant white noise while I work. Three men exit through the main room; the orange-shirt man exits toward the street. One of them — and I can't tell whom, but it was either the orange shirt or the athletic polo — left behind the sleeve of his drink and an empty water cup. This shouldn't bother me as much as it does. 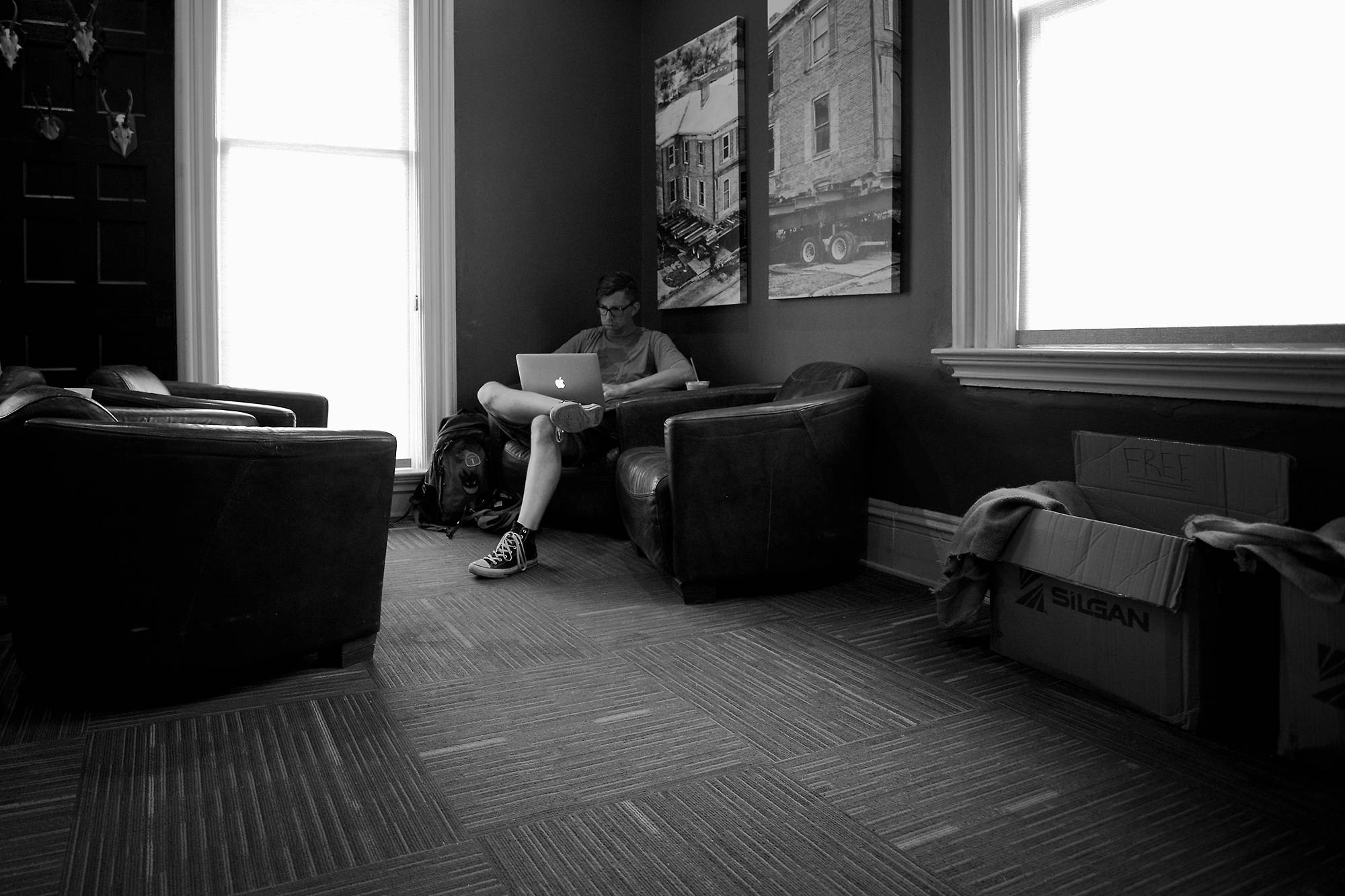 one of my usual spots, though there isn't an outlet in this corner

Every year, as summer winds down, Springfield loses good people. Some of them are students heading off to college. Some are following job opportunities in larger cities. And some people just get fed up living in this city and can't take it anymore. I am sympathetic to this.

This year is hard though. We're losing a lot of interesting, creative and beautiful people who have either moved away or soon will. I'm going to lean on the coffee house a lot this fall and winter to help fill the void. Maybe I'll find a good book and head back to the front porch when the weather turns, waiting for Lincoln's ghost to give me some perspective. 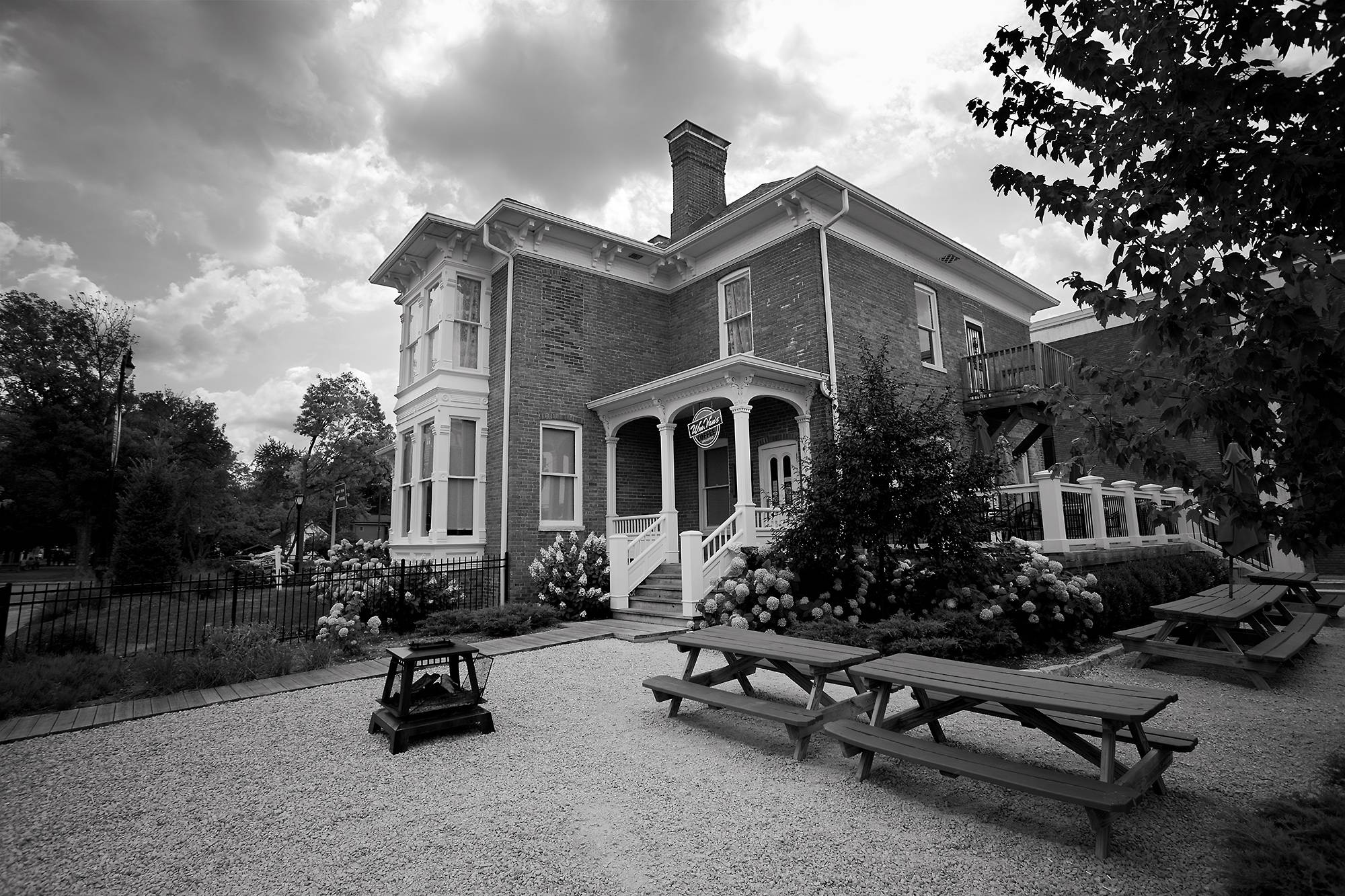 A great word portrait of the place. Too bad about the lack of an outlet for your favorite spot. Cheers!

This literally had me in tears. I miss it already!!! Thank you for this lovely and eloquent synopsis of a place I held and still hold dear.