This morning I left for a photo trip with my friend Clay. He heard about some ice caves that are normally only accessible by boat that you can now hike to over a frozen Lake Superior. Sounded like a fun and totally safe adventure, so here we are. Day one is complete. 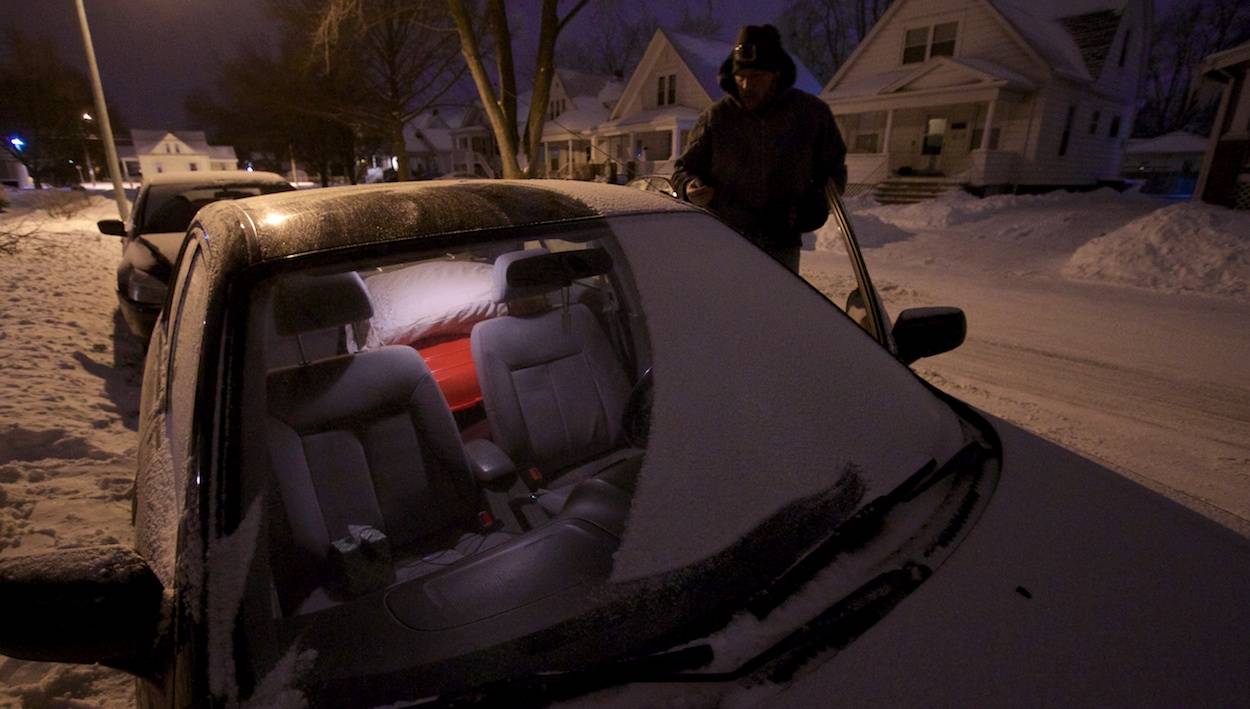 Clay's car is all packed just before hitting the road on Saturday morning.

We left Springfield at 4:30 A.M. this morning. It was cold, but not as bitter as it has been lately. A dusting of new snow had fallen overnight. We had a 10-hour drive ahead of us to the very northern tip of Wisconsin.

In the week leading up to the trip, we heard more and more from others who heard about the ice caves. It was starting to sound more like a major tourist attraction than the remote adventure I was initially expecting. 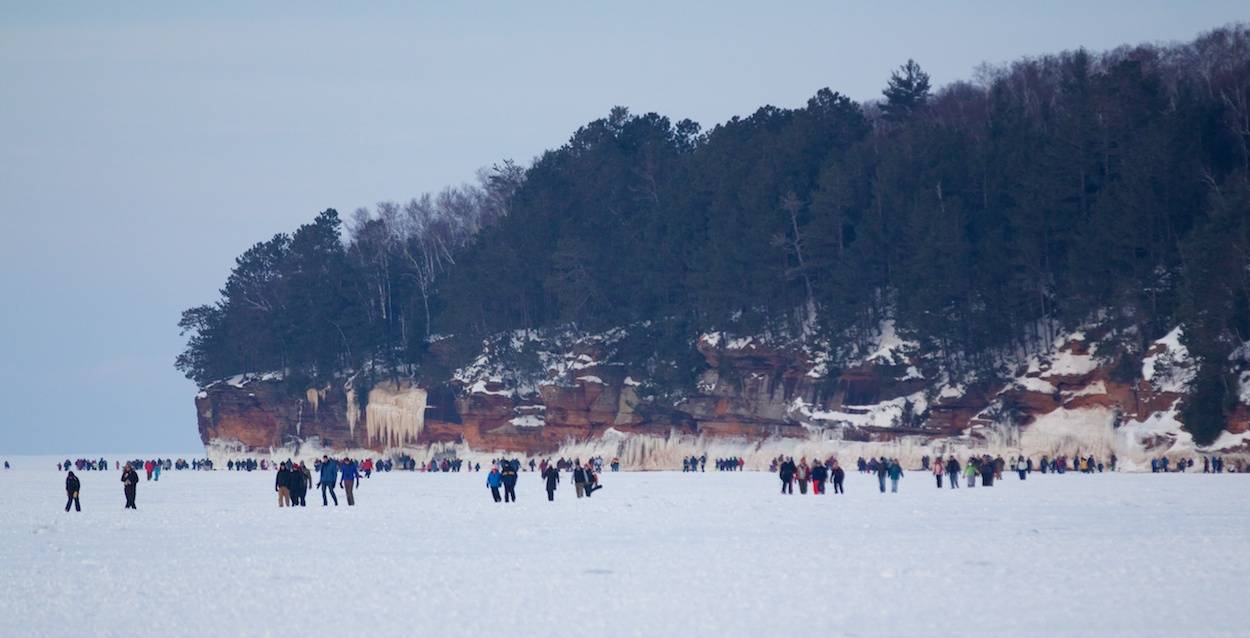 Thousands of people made the walk to the caves on Saturday.

When we arrived at sunset, we knew we were not alone. Hundreds of cars lined the roads leading to the trailhead. We passed dozens of people on the trail, all headed back to their cars. After a brief hike through a forest, the view opened up to the great expanse of Lake Superior, completely frozen and covered with snow as far as the eye could see. 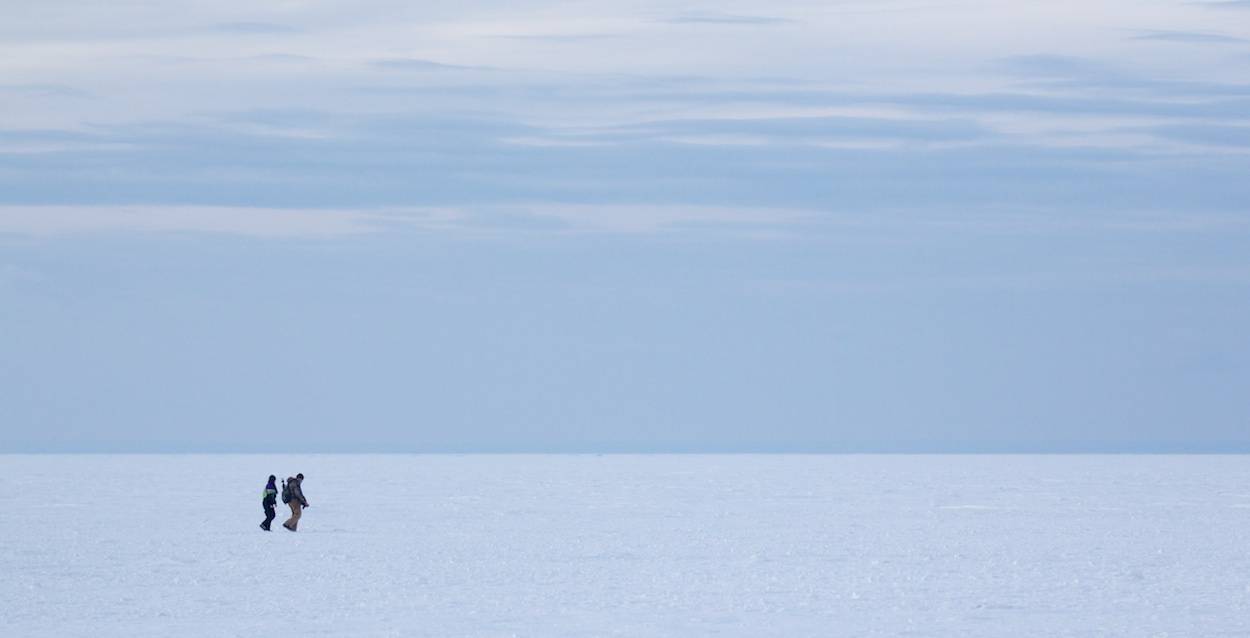 A couple hikes toward the ice caves.

Other than ice boulders and snow drifts near the bank, the lake was totally flat, with the snow being packed solid from the footsteps of previous visitors. The sun was setting, and it was a photographer's playground. 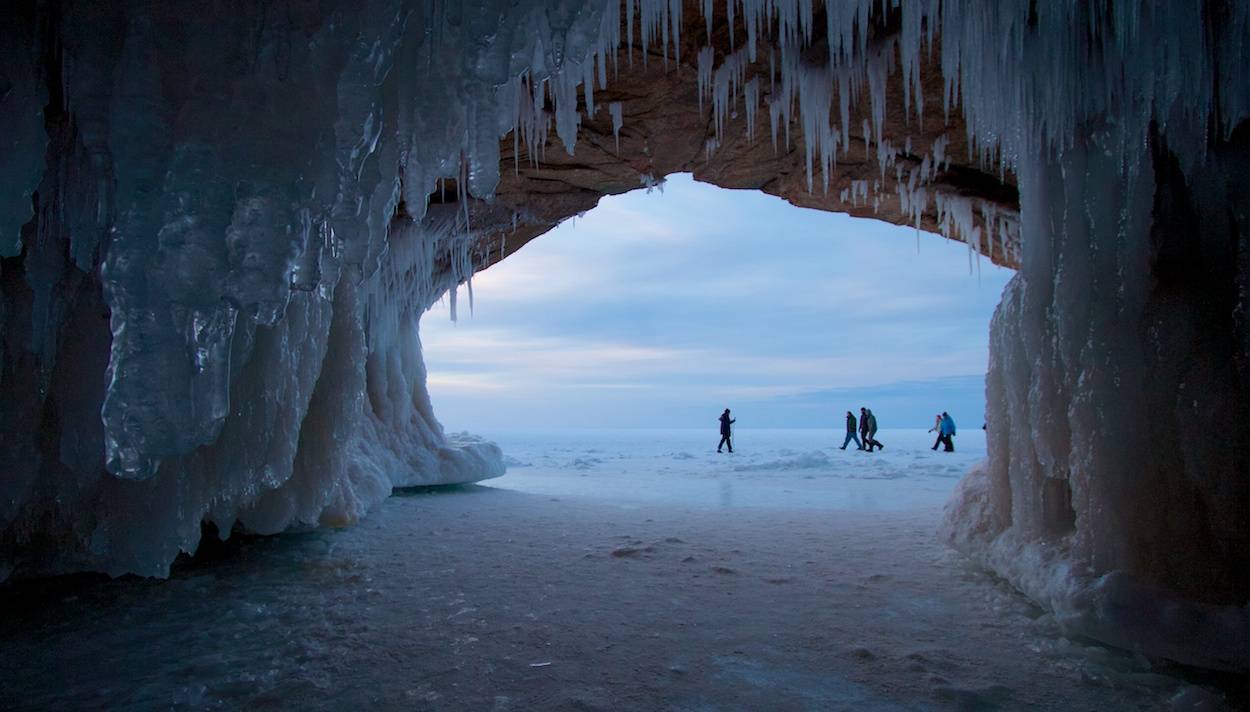 Looking out from the back of an ice cave. 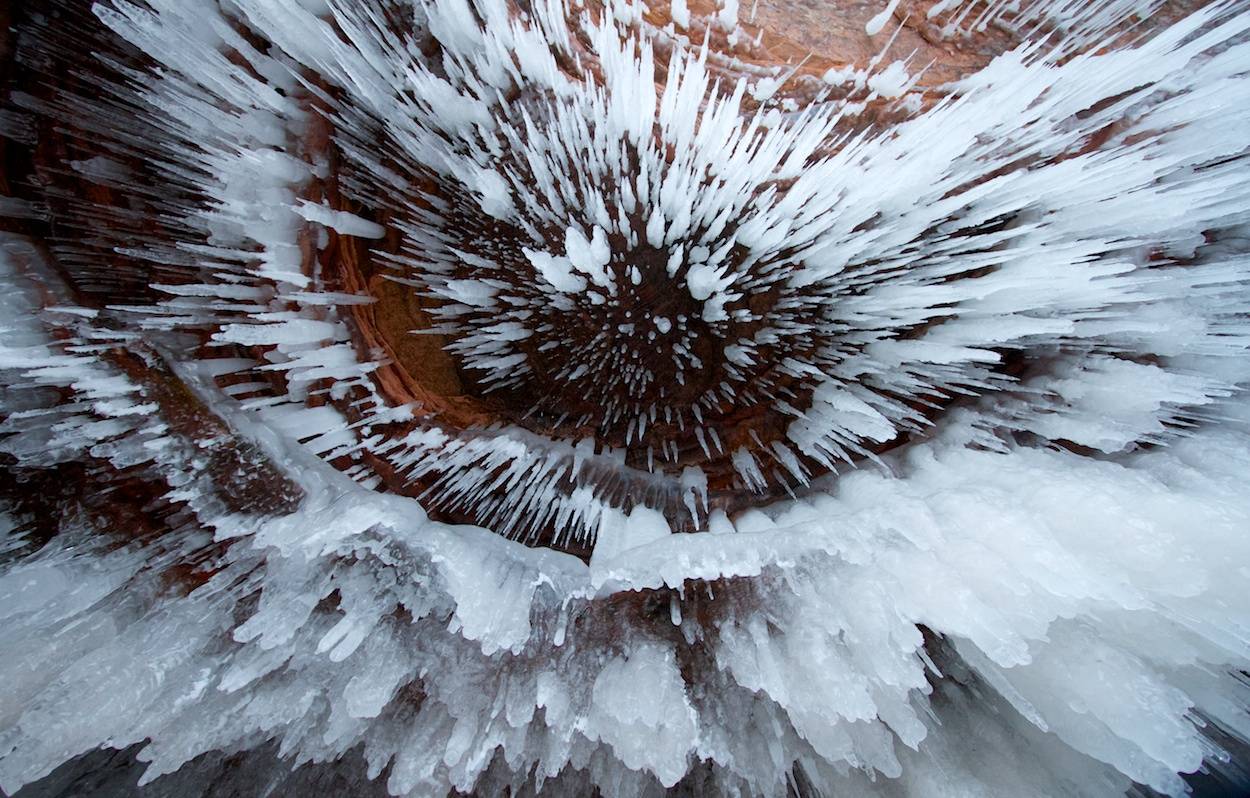 Looking up at the ceiling of an ice cave. 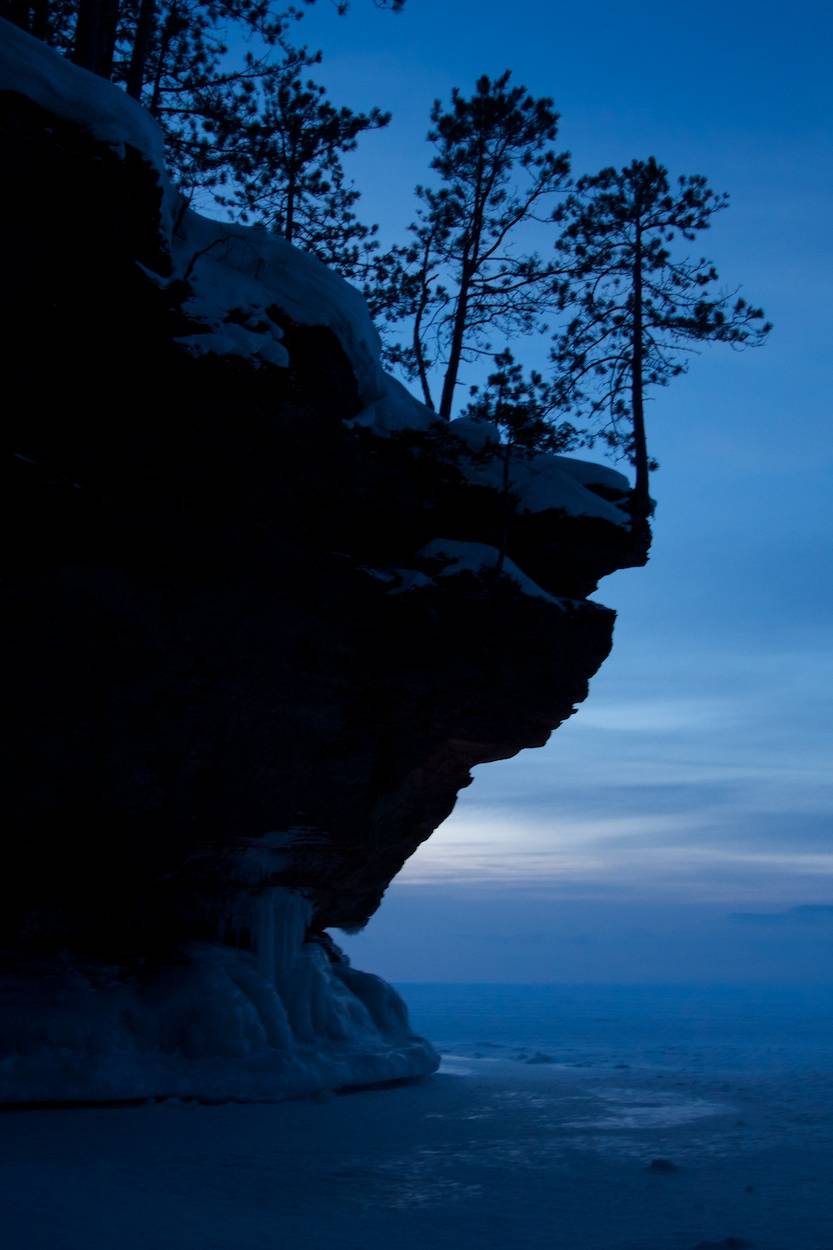 Dusk near the Keyhole.

The ice caves were awesome, but there was plenty else to keep you busy. Frozen waterfalls, icicles aplenty, slippery ice slicks. It was a frozen winter wonderland, and it was great seeing that many people outside enjoying nature. And it wasn't a particularly easy hike. But I guess there's not a whole lot going on up here in this region, unless you like sitting inside, being cold, drinking beer and eating cheese.

Most people had cleared out by dusk, and when we finally decided to head back, we just about had the whole place to ourselves. The stars were coming out, the moonlight was beautiful and it would have been great to stay out and make some more photos. But we had been out there a couple hours at that point and were ready to head back.

We loaded up the gear and started the long walk back to the car. It was a great first day of shooting, and we have two more days before we need to head back. Looking forward to getting some more shots and trying not to get lost on the lake. 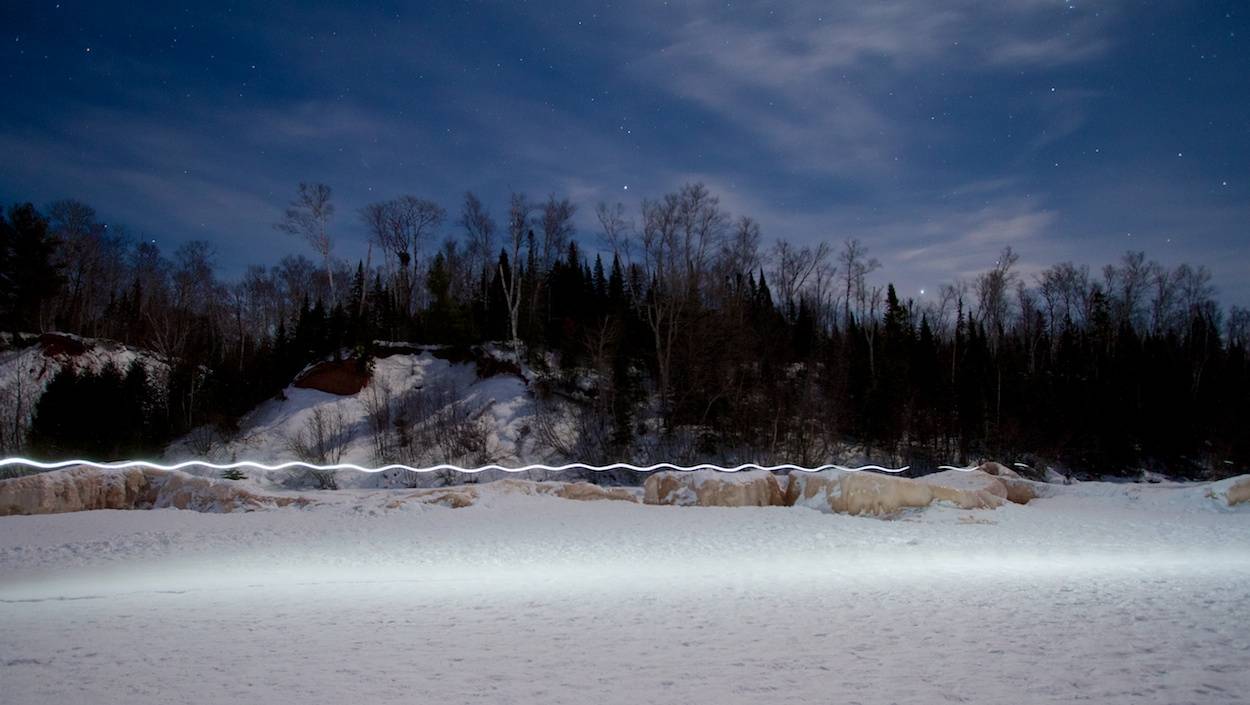 Long exposure on the hike back. Clay's headlamp created the squiggly line as he walked.

Wow! That's all I can say....wow! These are not sights I've ever seen before. Is it as cold as it looks? Great job, Dave!!

Great images and tale. The place is now on my list. Thanks

Great photos! Well worth the long drive and hike to get there!!

Our neighbor's family lives on a resort right on Superior where you probably are. The said that 8500 people visited the caves on Saturday. Anxious to see your pics.