Final day at the Sea Caves

Monday was our last day visiting the Apostle Islands Sea Caves, and it started at 6 a.m. with a wind chill of about twenty-five degrees below zero. Fortunately by this time, I had figured out what worked and what needed improvement with my outfit. I layered up, doubled up on hand warmers and packed a single camera and one flash.

Snow was falling at the dawn's first light as we drove to the trailhead access road. Only two vehicles were there — a stark difference from the hundreds of cars lining the road on Saturday. 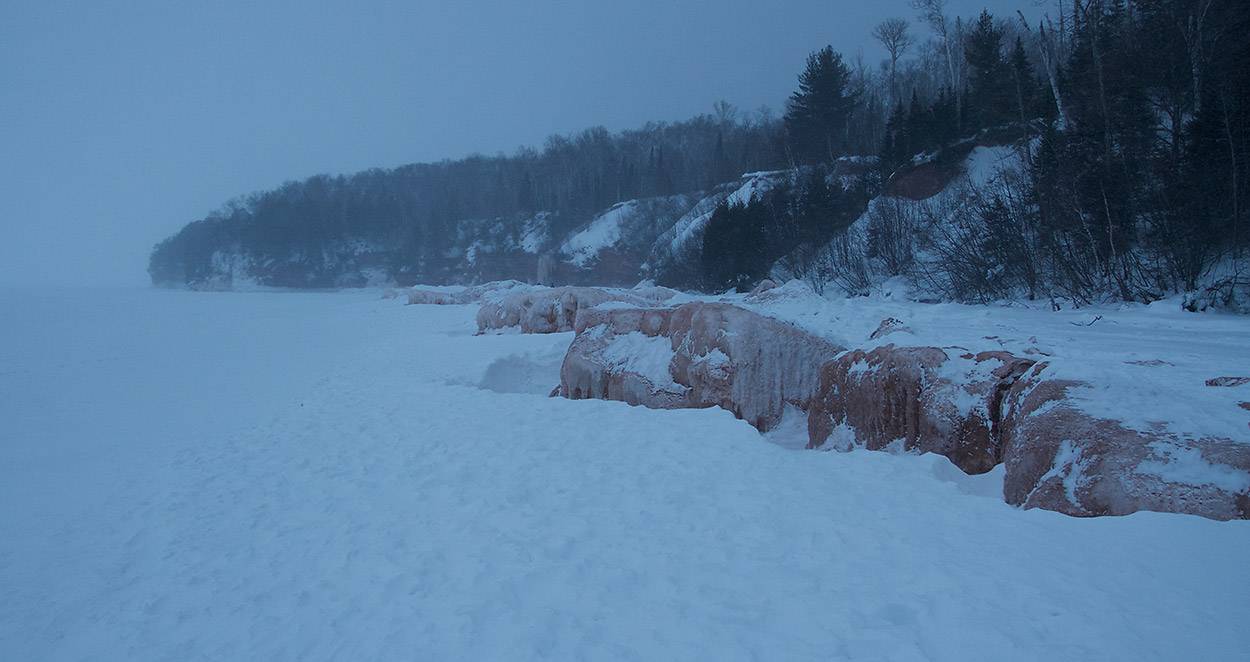 With the wind at our backs, we made our way down the shore to the ice caves.

The goal today was more to play than photograph. Our gear was minimal: one DSLR, one flash and one GoPro between us. No tripods or bags. It made travel so much easier, and it let us explore caves we had been wanting to get into all weekend. 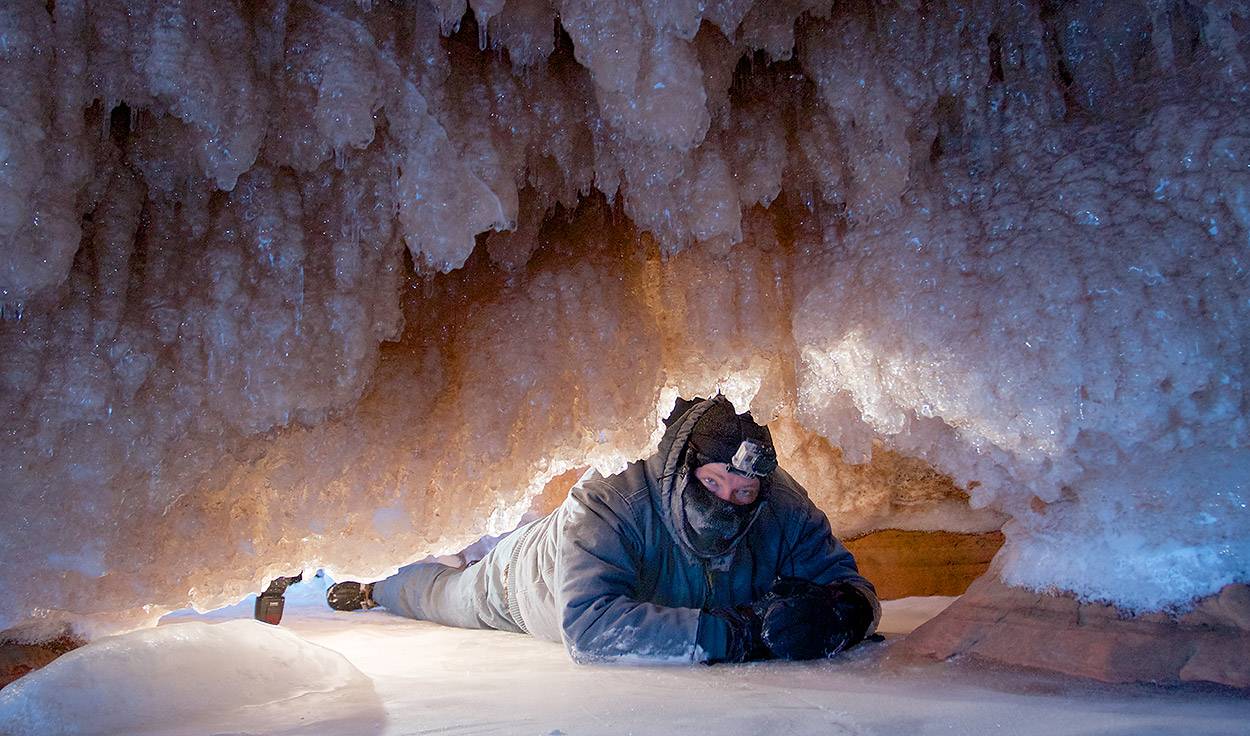 Clay explores one of the dozens of ice caves. 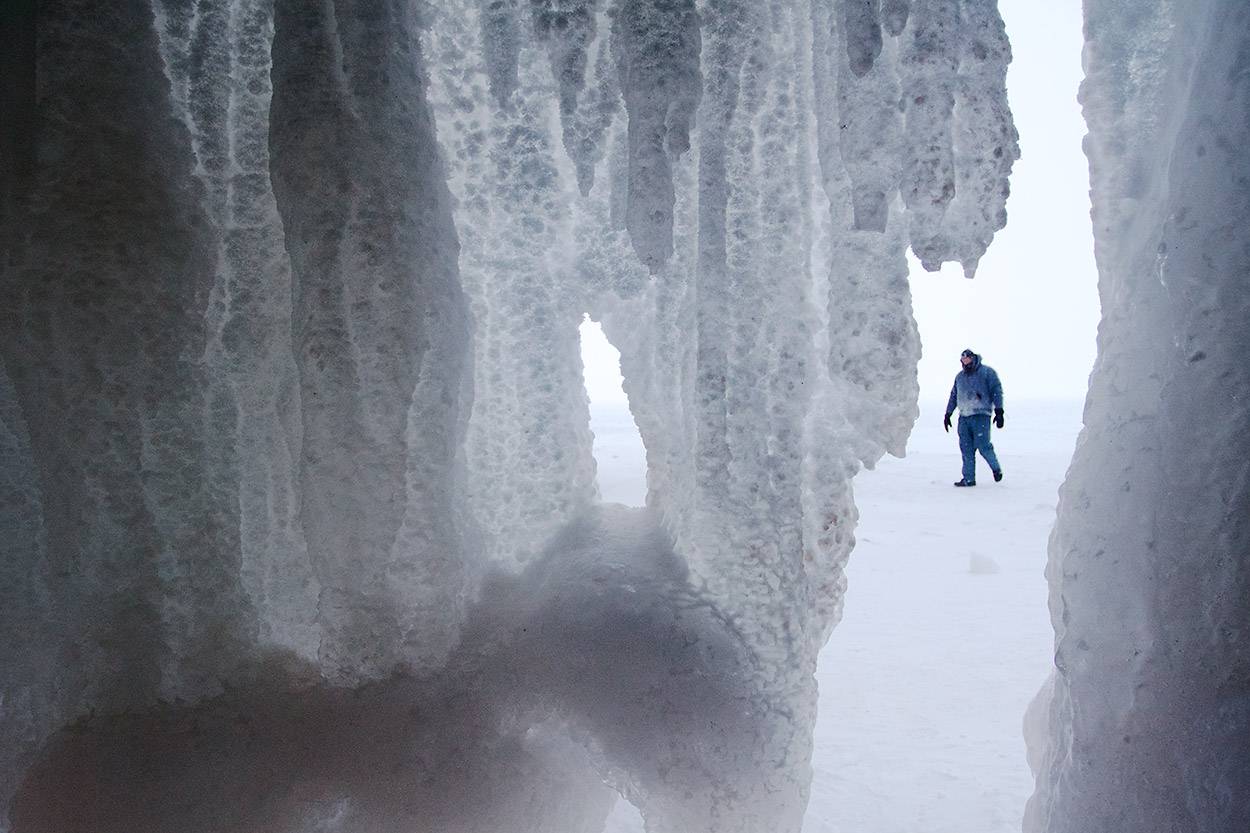 looking out from a tiny cave

We spent the morning just walking and playing. It was a really nice time. There were only a handful of people there, which was a welcome change to the Park Service's estimate of 8,500 visitors on Saturday alone.

My favorite discovery was in the formation called the Crevasse. Clay found a large, sloped shelf of ice that we used as a slide. There are some videos of our activities, but unfortunately they are too extreme to post on this blog. 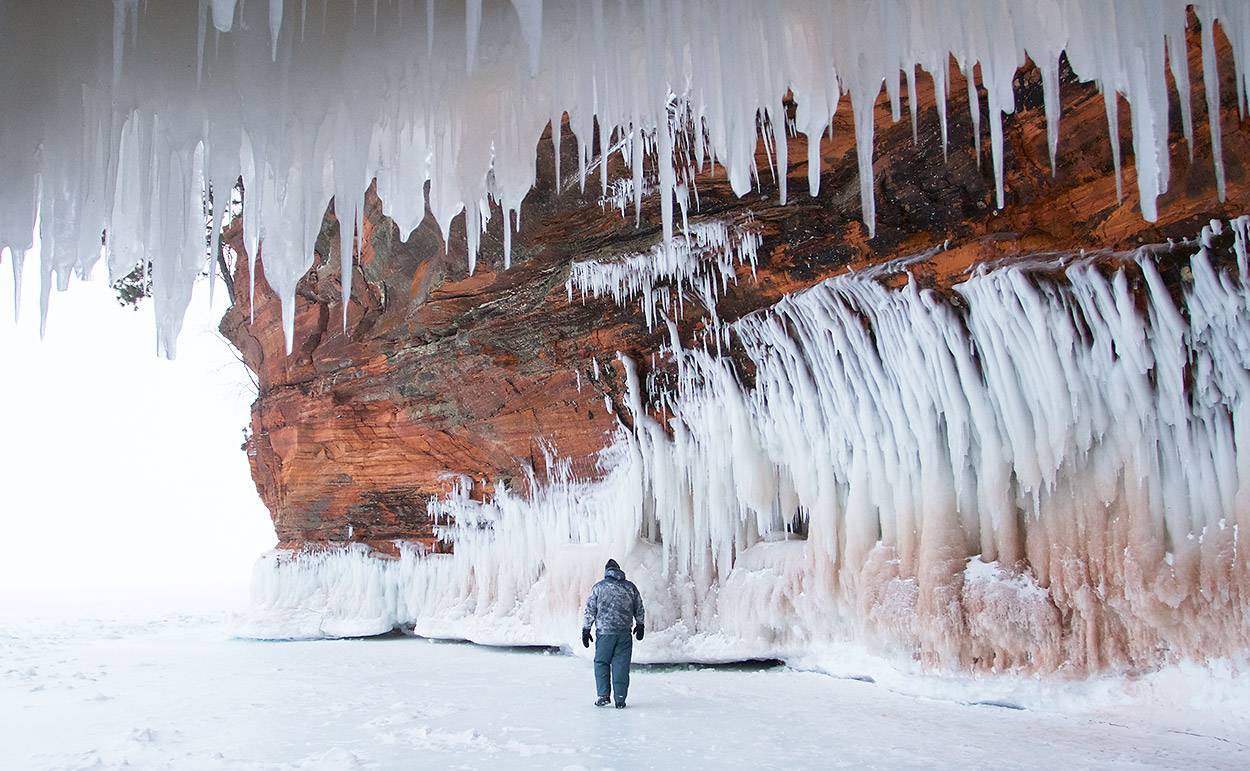 Clay looks for more caves to explore. Some caves had tiny entrances but opened up to multiple chambers. 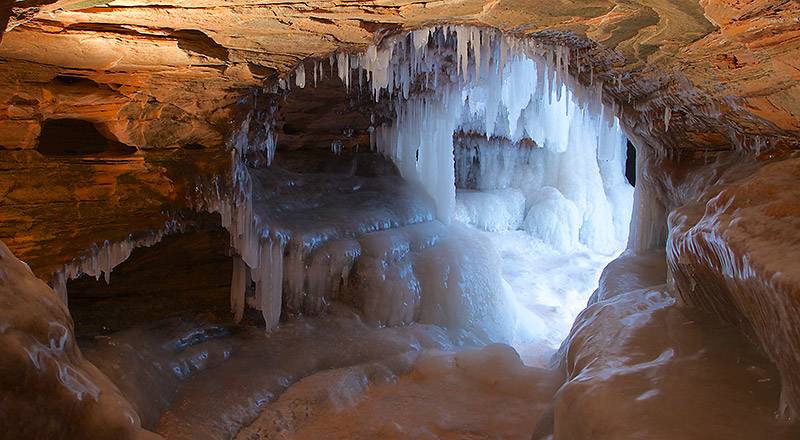 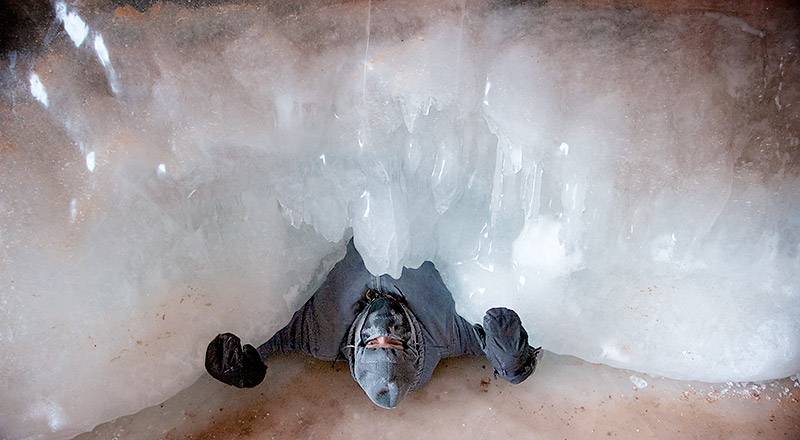 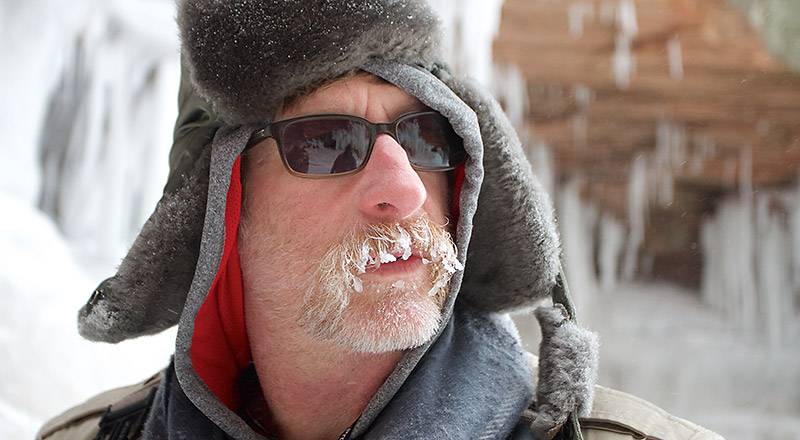 It was eerie to be standing on a lake, looking back at (and playing on) the cliffs that had been shaped by water and wind for what I can only assume is thousands of years. In a couple months the ice might be gone. This part of the lake doesn't freeze every year. The last time it froze enough to let people explore the ice caves was 2009.

It was as if the massive forces of the world's largest freshwater lake had been paused. Other than weather conditions and the occasional kid (with negligent parents) who would knock down icicles, nothing seemed to change from day to day. You got the sense that the enormous icicles and sheets of ice must be growing, breaking, shifting slowly, but you never saw it. Sometimes you'd hear a large crack. On Sunday, Clay and I were standing in a cave when a moderately-sized icicle broke off from the ceiling without a sound and fell straight down like a dagger, shattering on the ice below. That was pretty cool. We were just glad to not be standing under it.

People were always happy to stop and chat. I'm not sure what it is about the region that makes people so friendly, but they sure are. If I had to endure the kind of winters they had to, I don't imagine I'd be quite as chipper. I'm sure there's a lesson in there somewhere. 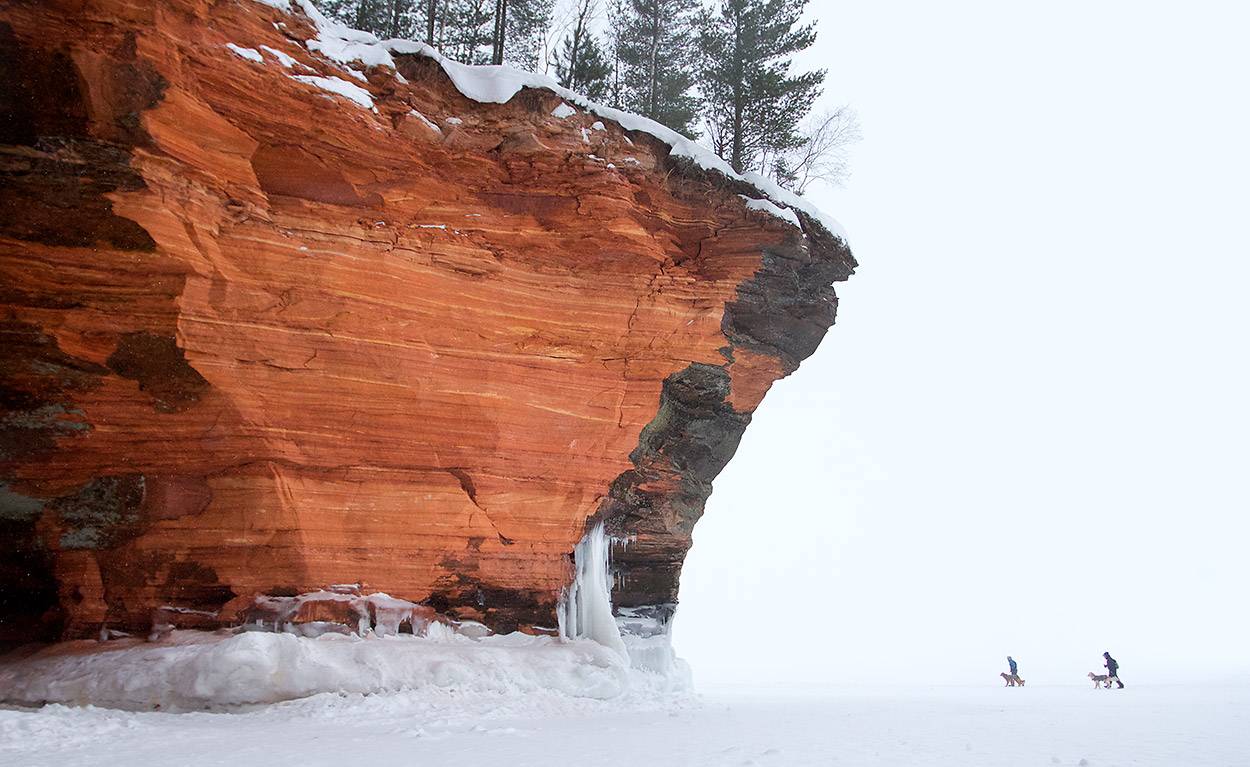 The colorful sandstone cliffs provided a stark contrast to the colorless snow and ice.

After a couple hours of exploring, we headed back to the car against a headwind and frosted goggles. It's always sad walking out of a place like this for the last time, not knowing if or when I'll return.

We quickly packed our things and headed out of town before noon. The drive was going to take roughly eleven hours, putting us in Springfield by 10 p.m. 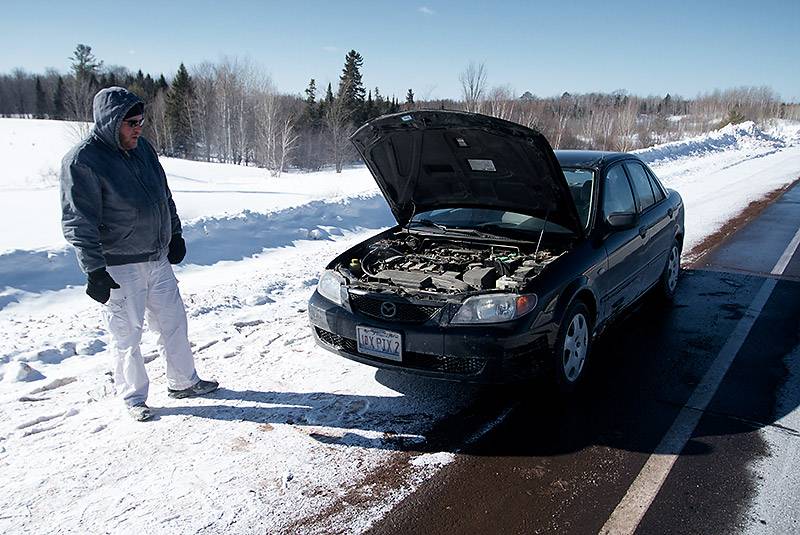 in the middle of nowhere, Wisconsin

The trip was uneventful until we heard a squeaky belt sound coming from the engine about an hour out of Bayfield. That was quickly followed by a loss of heat, several dashboard warning lights turning on, a loss of power steering and eventually a loss of engine power.

We coasted to the side of the road about 12 miles outside of Hurley, Wisconsin. Smoke poured from under the hood. We quickly got out and assessed the situation, and it was not good. My phone didn't have signal, but Clay found a bar long enough to call for a tow from a place in Hurley. The windchill was around 15 below.

Shortly before the truck arrived, we noticed that the alternator belt was missing. The mechanic confirmed this but said that was the least of our troubles. The engine had been gushing oil and had no compression. The outlook for any sort of repair was bleak. 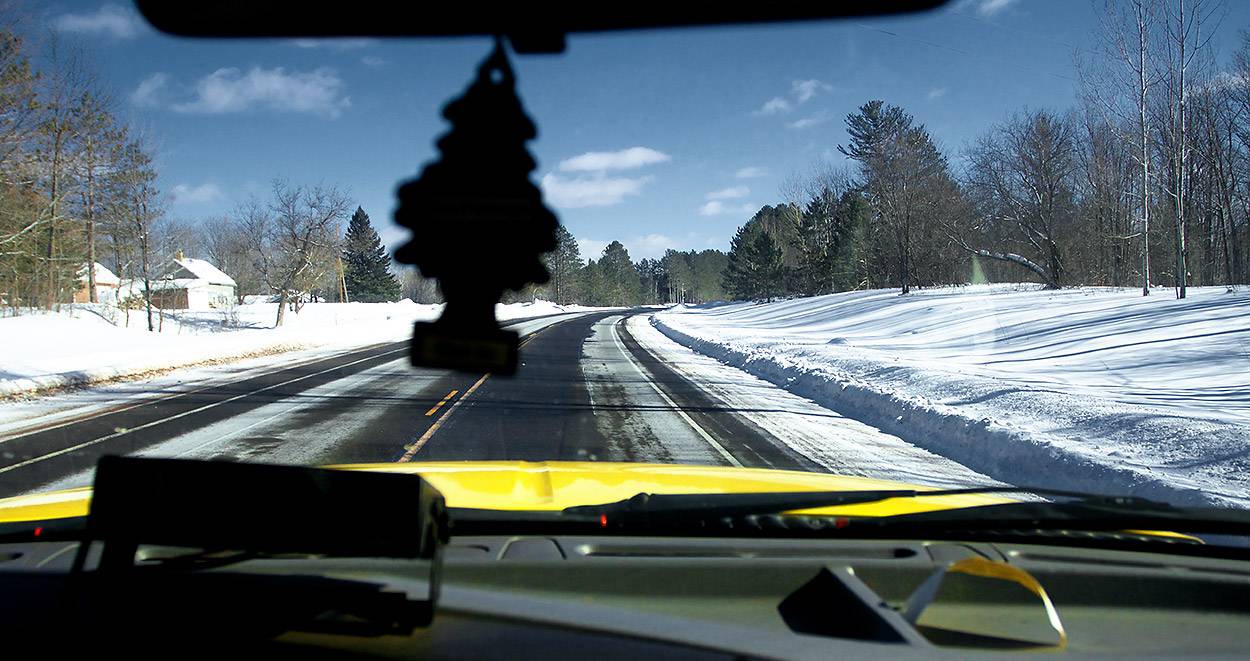 my view from the cab of the tow truck as we headed to Hurley, Wisconsin 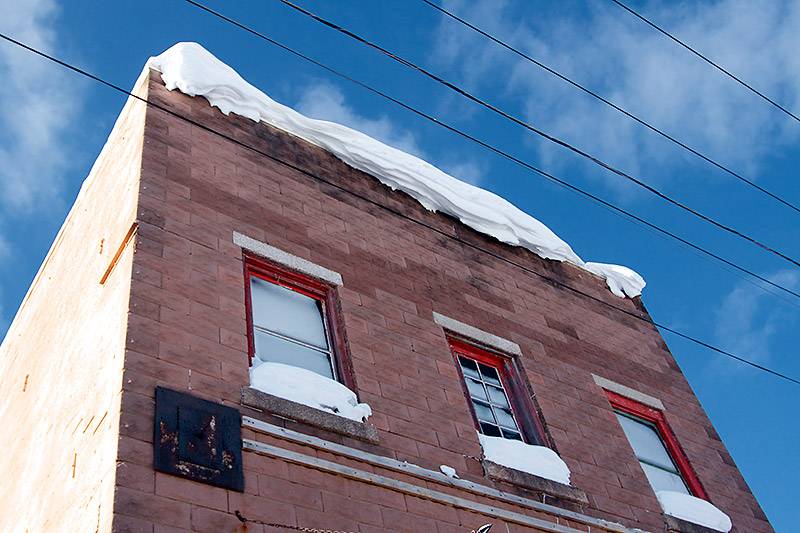 a snow-capped building in Hurley

We got towed to Hurley, where it was time for a decision. The estimate for repairing the car was around $1,000 and five days, minimum. The shop declined an offer to buy it for scrap. 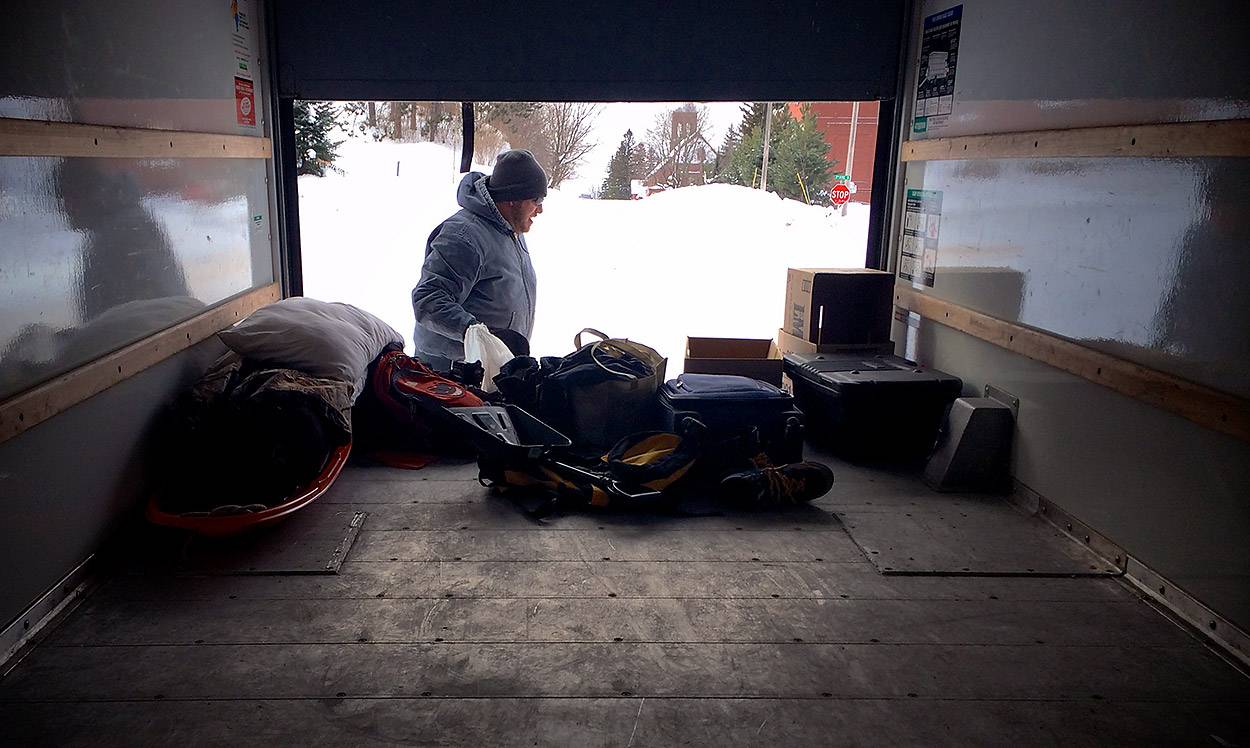 lots of room left over for cheese and beer

Getting home was going to be a challenge. There were no car rental places anywhere close by. Busses seemed like the only option, but the logistics were not on our side. We were in the middle of a small town 10 hours from home with nowhere to go, lots of gear and a dead car.

Fortunately, there was a guy in town who rented U-Haul trucks. He had one available and gave us a reasonable rate. Clay found a nearby scrapyard that would buy his dead car. We walked several blocks to pick up the U-Haul, loaded up our gear and emptied the contents of Clay's car into cardboard boxes. 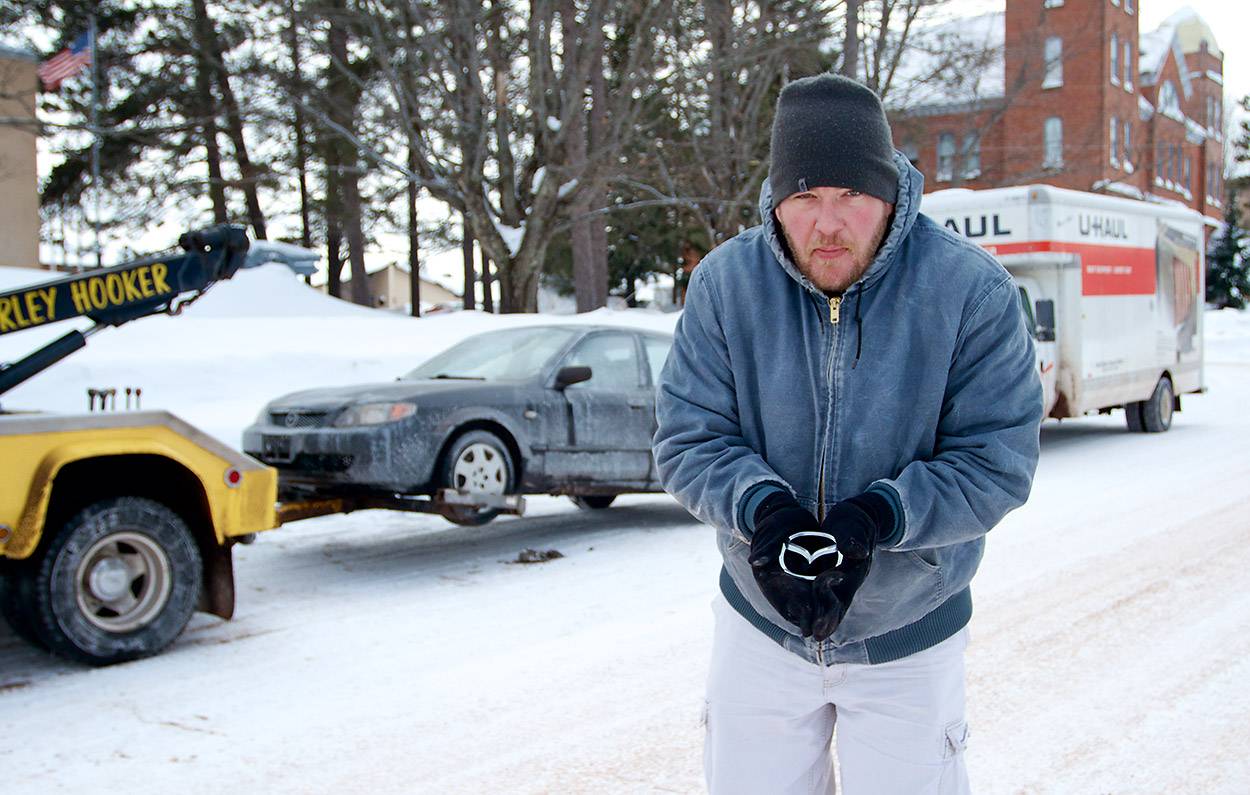 Clay mourns the loss of his trusty Mazda. It was a good car, but it was going to a better place.

After a brief farewell to the JAX PIX 2, we headed out of town in our new ride: a large, fuel-inefficient U-Haul truck rented for a one-way trip to Springfield. The drive home was somber until we stopped at Woodman's in Janesville to stock up on local cheese and beer.

We rolled into Springfield at 12:30 A.M. and headed to Clay's house to unload, where my Honda was waiting for me. I was happy that it started without trouble. But as I was about to pull away, my driver's side power window motor gave out, leaving the window all the way down. It just wasn't my day to be around motor vehicles.

The trip was a blast, and I highly recommend the Apostle Islands Sea Caves to anyone with an adventurous spirit and warm clothing. I'd love to go back, and if I do, I'm walking to Eagle Island.

A great adventure, Dave. Thanks for taking us all along.

Wow! This just takes my breath away!