I've unintentionally taken a long break from studio photography. I had some free time last night and decided to get back into it, shooting a new profile pic in my office.

Photographing yourself presents a lot of challenges. It's tough to set up lights, dial in focus and direct yourself. I made a lot of choices with the setup to help with all of these, and for the most part, it went well.

For the camera, I went with my Canon 6D. Its full frame sensor is the best one in my lineup, and I wasn't going to be using auto focus or shooting rapid sequences (the camera's two biggest weaknesses, in my use). Everything was set on manual: ISO 800, f/18, 1/100 shutter, white balance set to flash.

For lenses, I went with the general all-purpose kit lens, the 24-105mm 4.0. It's not great at anything, but I wasn't going to be shooting low-light, and the lens was going to be stopped down quite a bit. So I chose this over my 85 or 50 primes because it has the flexibility of zooming. I tried using my 70-200 2.8 for some close-ups later in the shoot, but even stopped down, it was really hard to get in focus.

I usually use manual focus when shooting in the studio, especially self portraits. I generally like to keep the ambient light level low, and this can make it hard for the camera to find focus. I also use an intervalometer, and if it misses focus on one shot, sometime it will just stop shooting. To set focus, I set focus on the back of the chair or stool, then bump it back a bit on the lens. Then I sit in for a test shot and use trial and error from there.

For lighting, I just used one external light, an Elinchrom Quadra flash head in an octagon soft box. I absolutely love the Quadra flash system. It's powerful, portable and extremely reliable. It has a remote trigger that sits in the camera's hot shoe and sends a signal to the battery pack to fire when the camera shoots. The flash intensity is set manually. I like to keep it somewhere in the middle of the range. This gives a nice bright light but recycles quickly.

One tricky thing about using a flash in a small room is bounced light. I wanted the photos to have dramatic lighting - strong from one side, but the other side needed to be dark. Using a flash in a small room usually results in a lot of bounced light, which can make it tough to accomplish this look. My ceiling is flat black, and the floors are dark, so that helped. I had a dark gray backdrop behind me, and the wall to my left (the flash was on my right) was blue. Not great, but I didn't mind a blue tint to any minimal bounced light. There was a white door immediately on my left though, which would have bounced too much light onto the dark side of my face. So I hung a dark blanket over it to act as negative fill.

I hooked up a small monitor to the tripod that held the camera so that it would show me each photo after the camera took it. This let me immediately see the results and make adjustments for the next photo. I had my intervalometer set to shoot every 4-6 seconds. This set up a pretty good cycle time to see the photo, adjust my position and take a better photo.

Anyway, that's all the technical stuff. Well except post-processing. I didn't do much to the photos - I processed them initially in Apple's old and forgotten Aperture program, then sent them through a Photoshop action to desaturate / resize / sharpen.

All that was left was for me to sit in front of a camera and be photographed. Which is the hard part. I find that process to be extremely uncomfortable. But I think it's important to go through that as a photographer so I can relate to what I put other people through. Speaking of which, I want to do this again soon with someone else in front of the camera. Get in touch if you'd like a new profile pic or headshots.

I took a total of 252 photos. Many of those were test shots. And near the end, I tried to get some extreme close-ups just for fun, but they were almost all out of focus. I've included one below along with the other keepers. 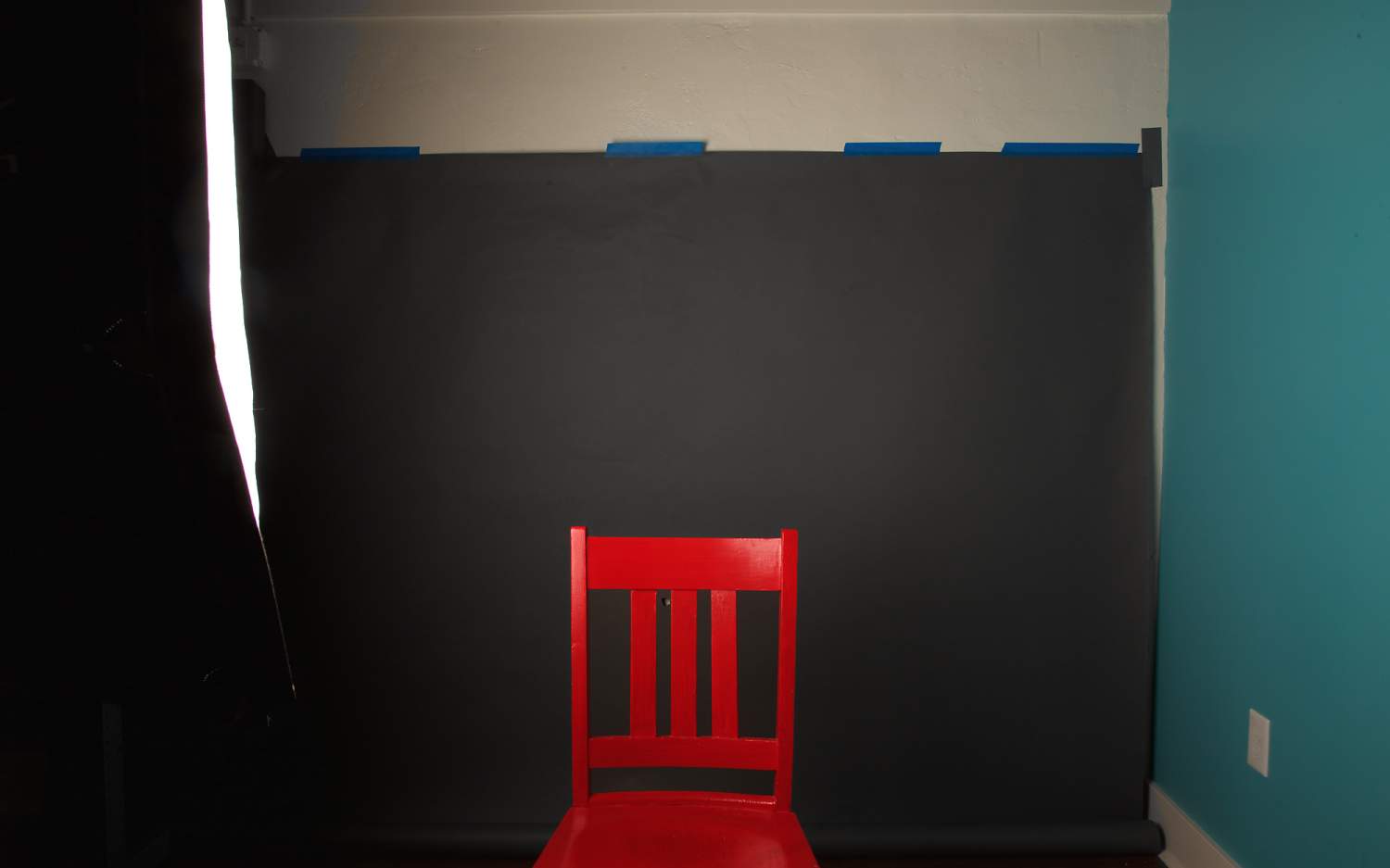 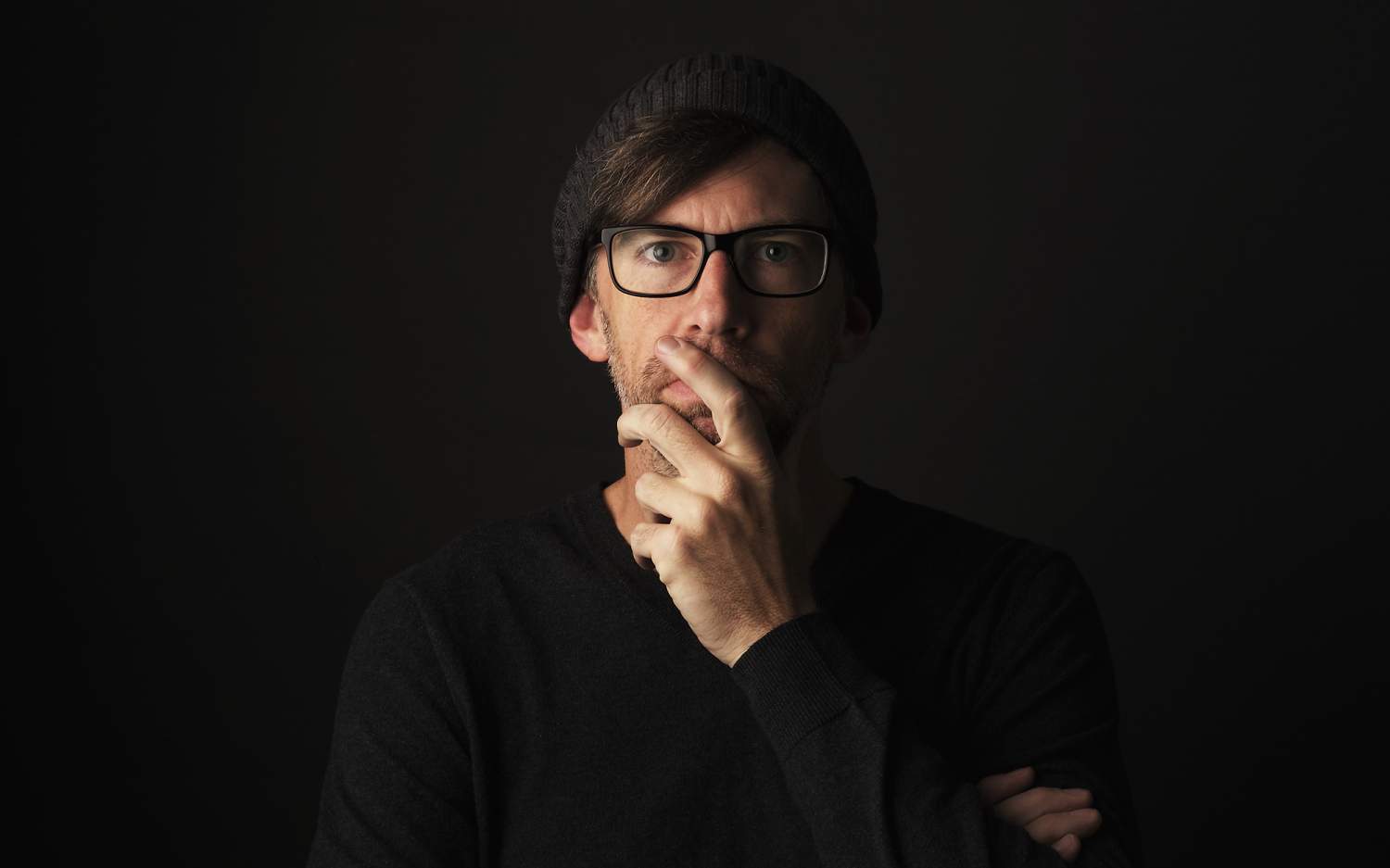 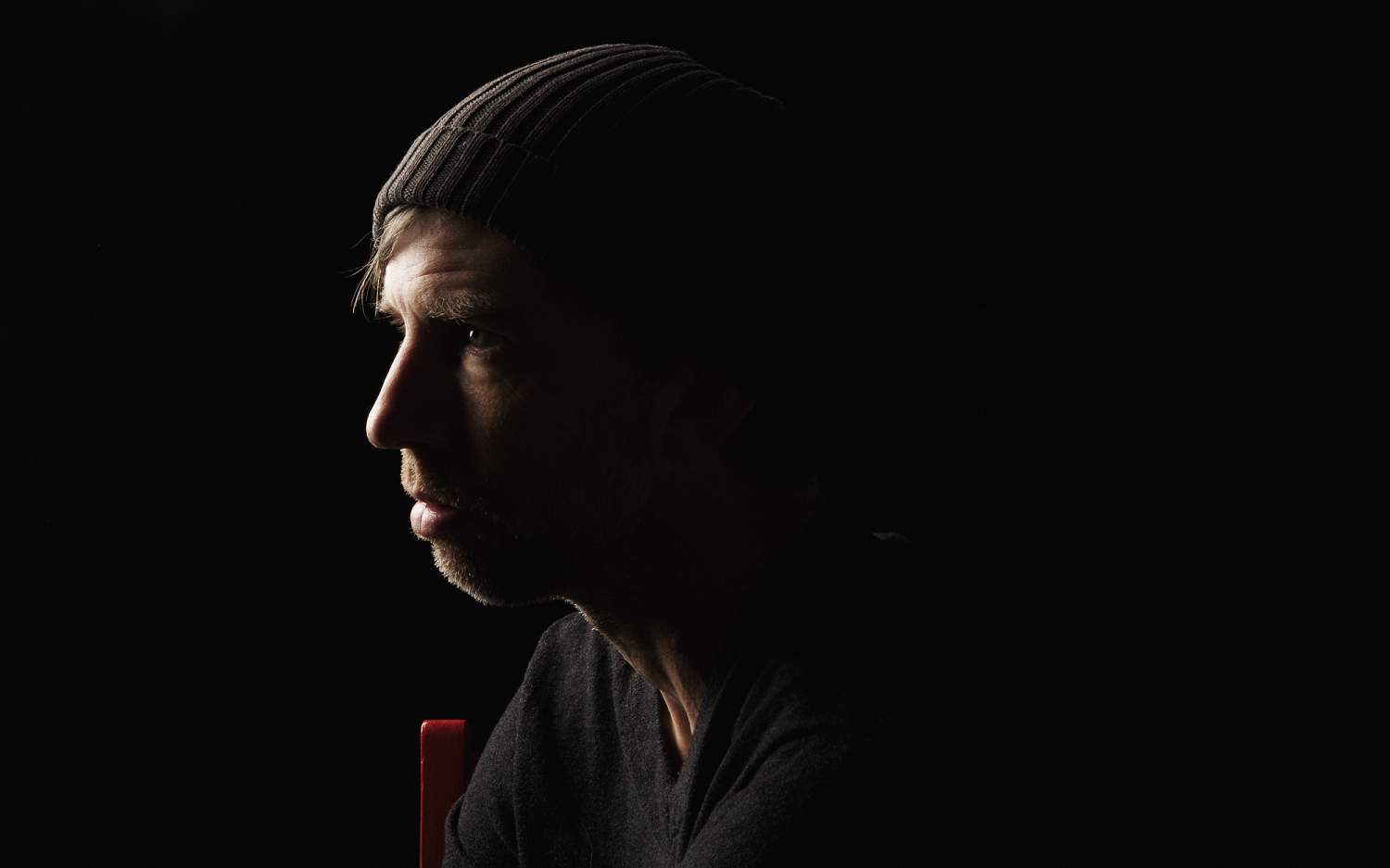 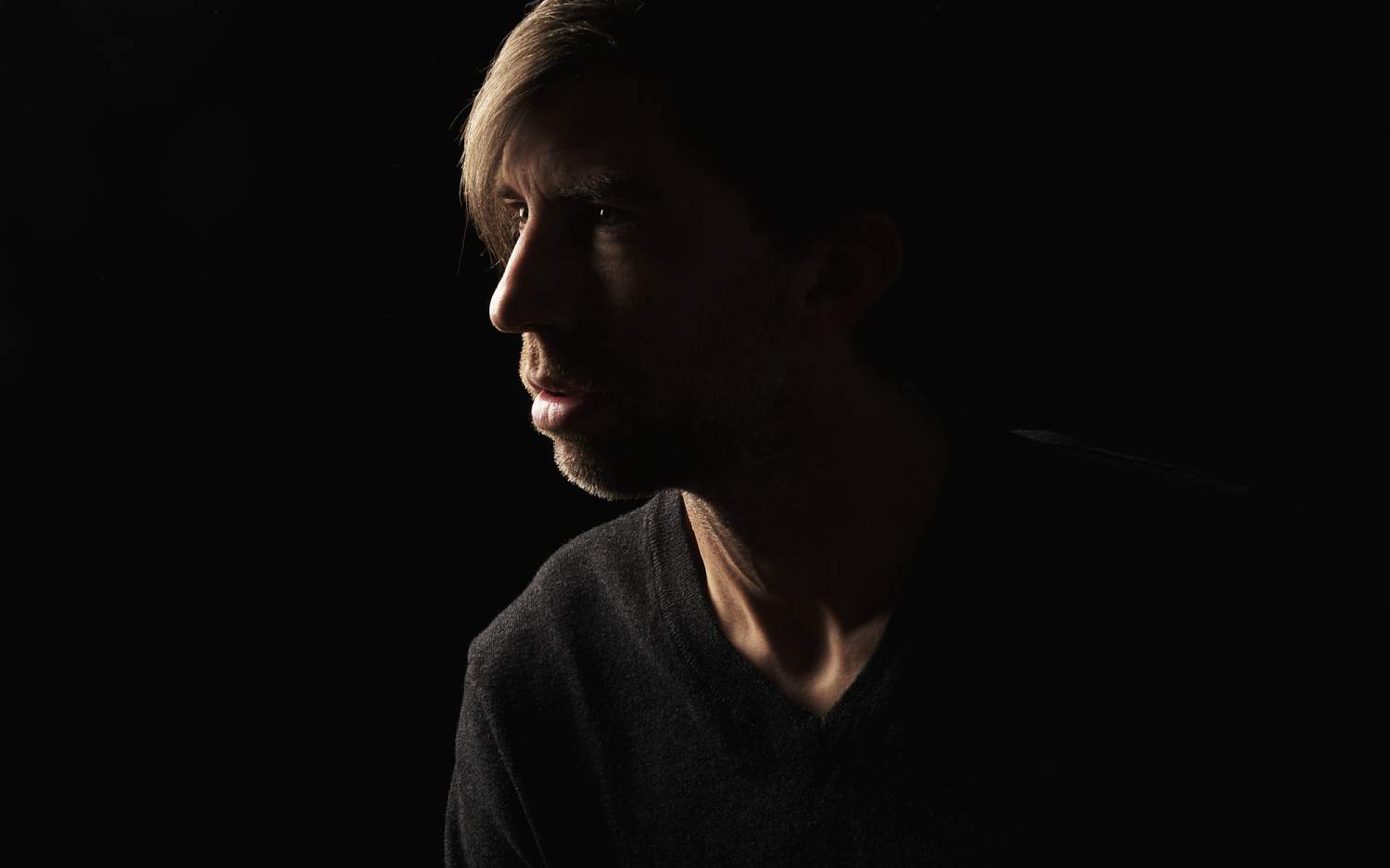 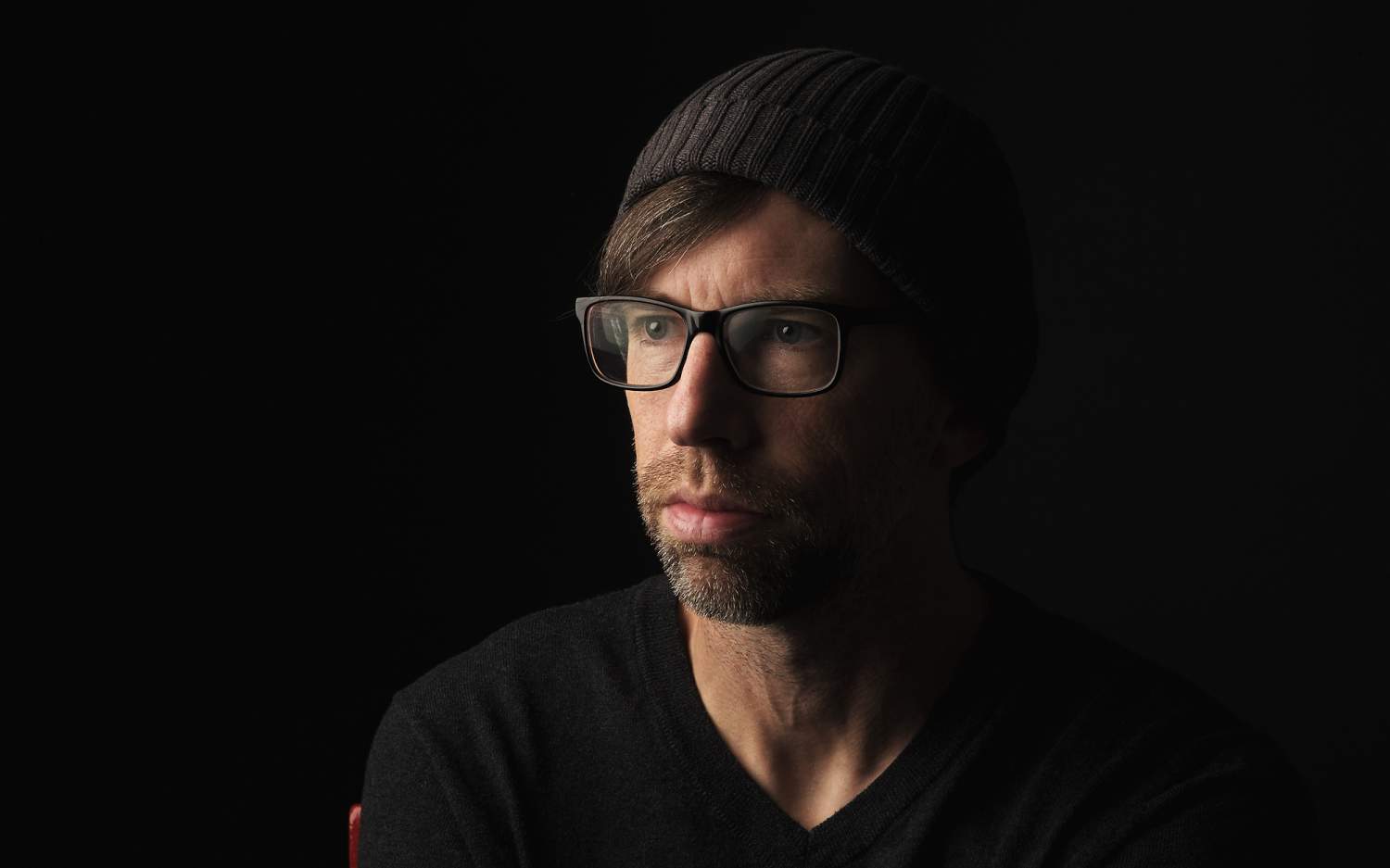 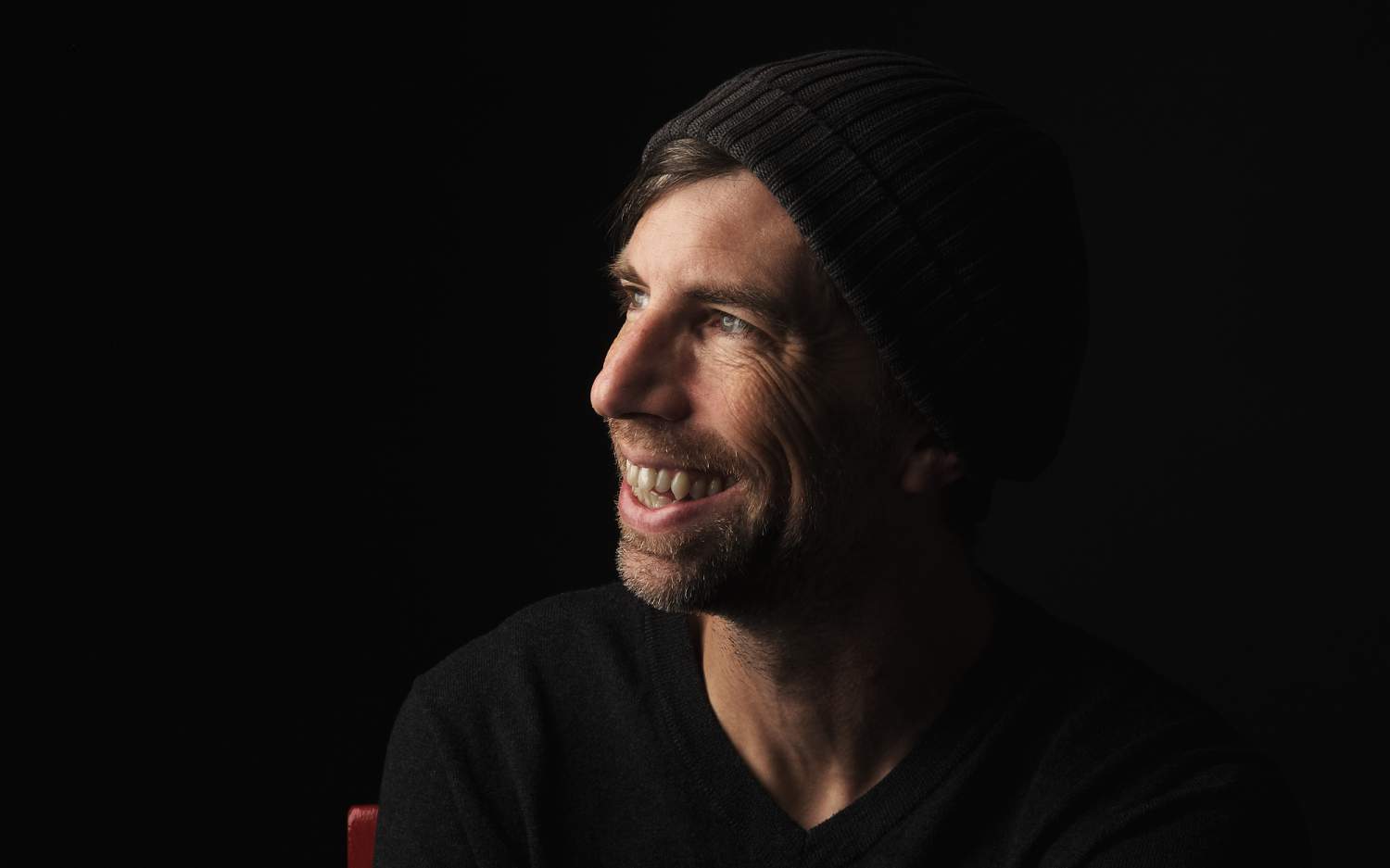 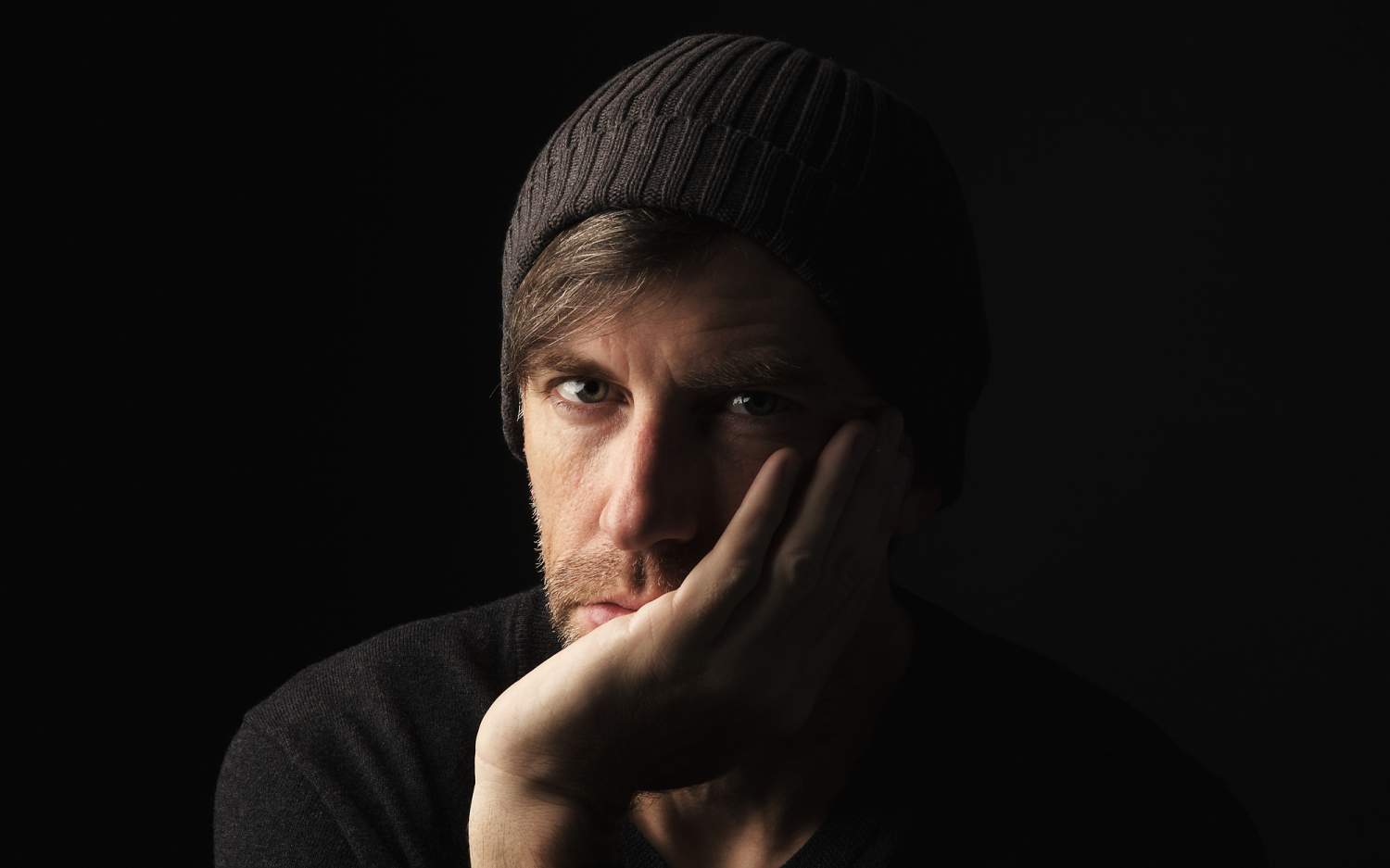 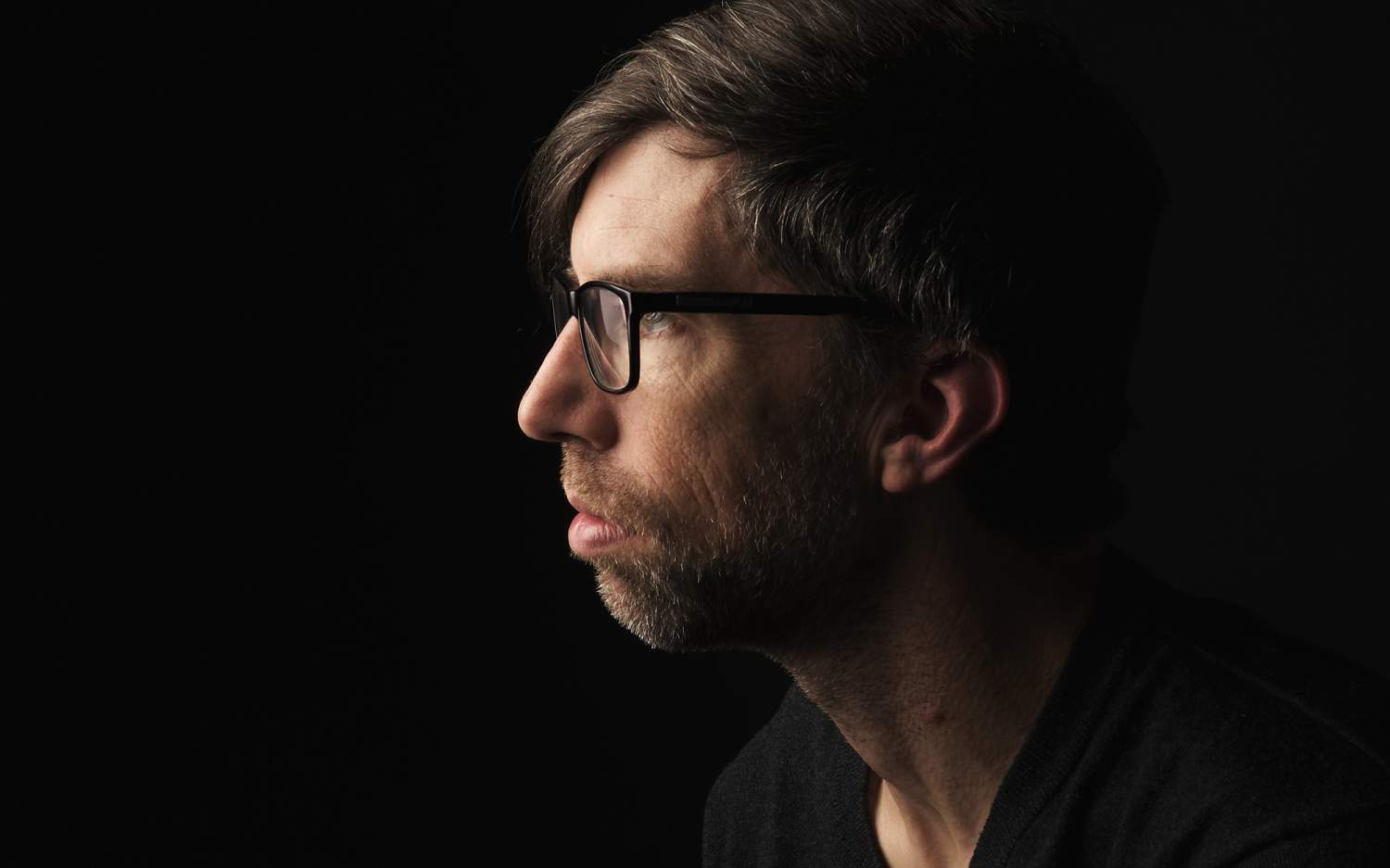 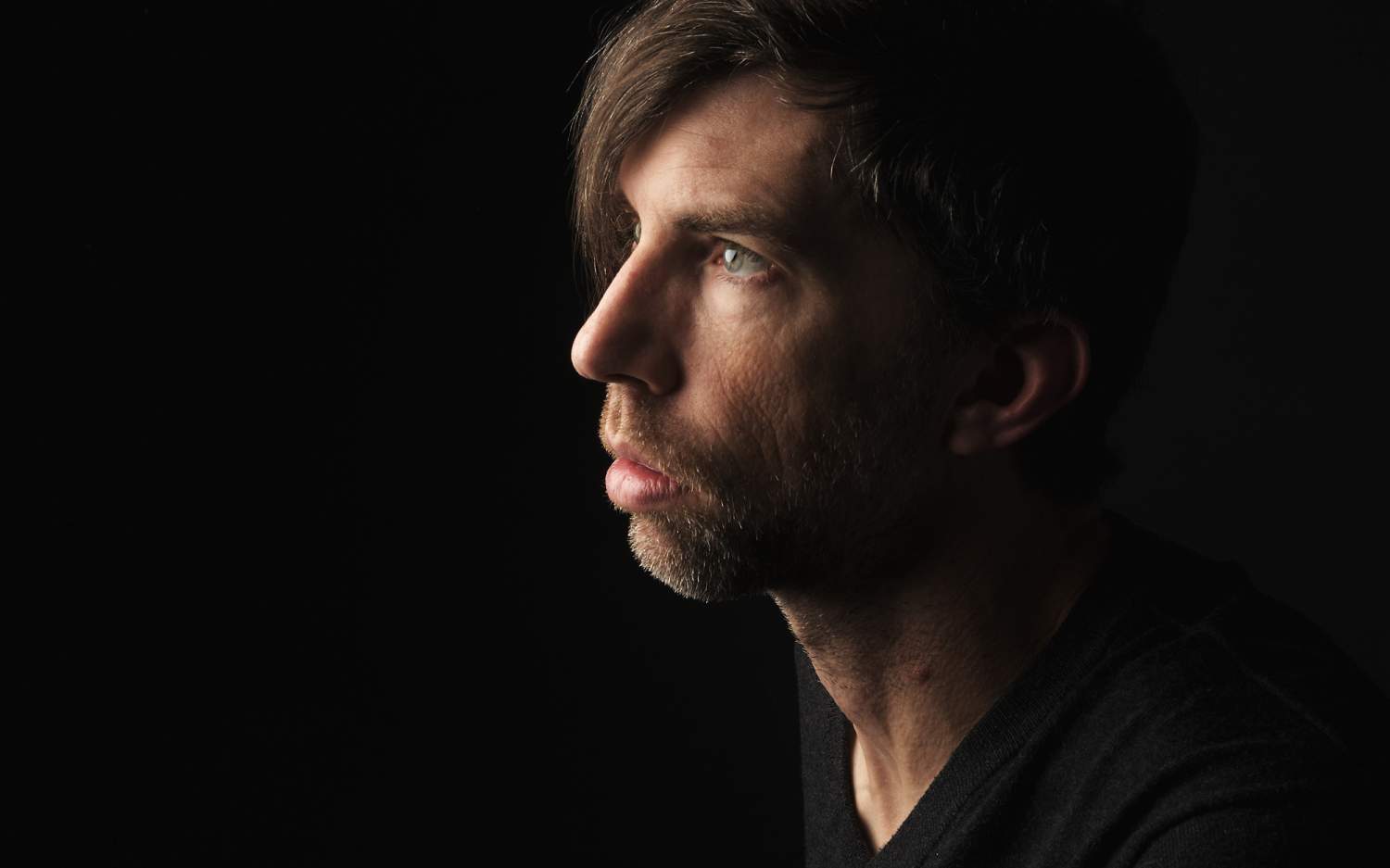 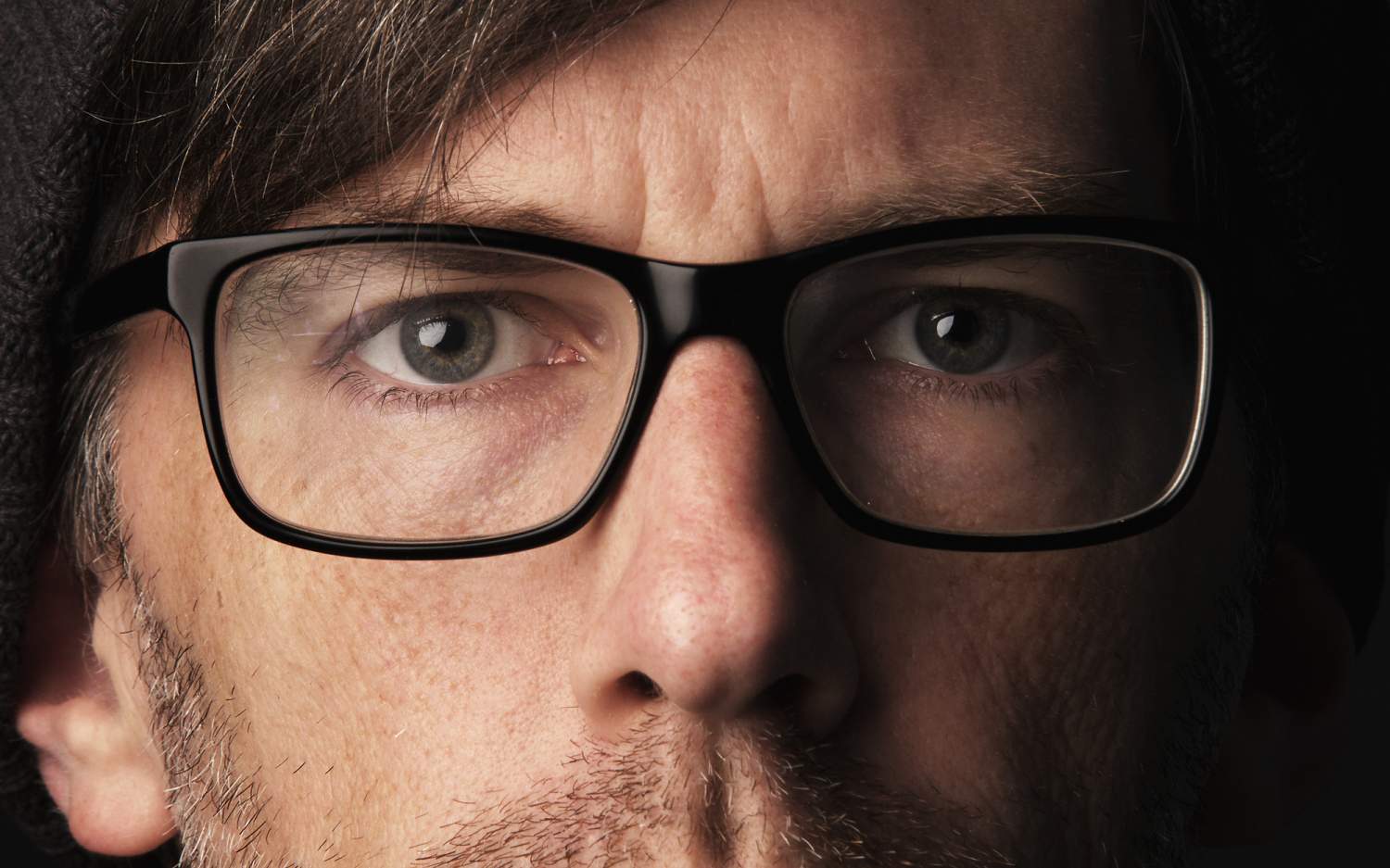 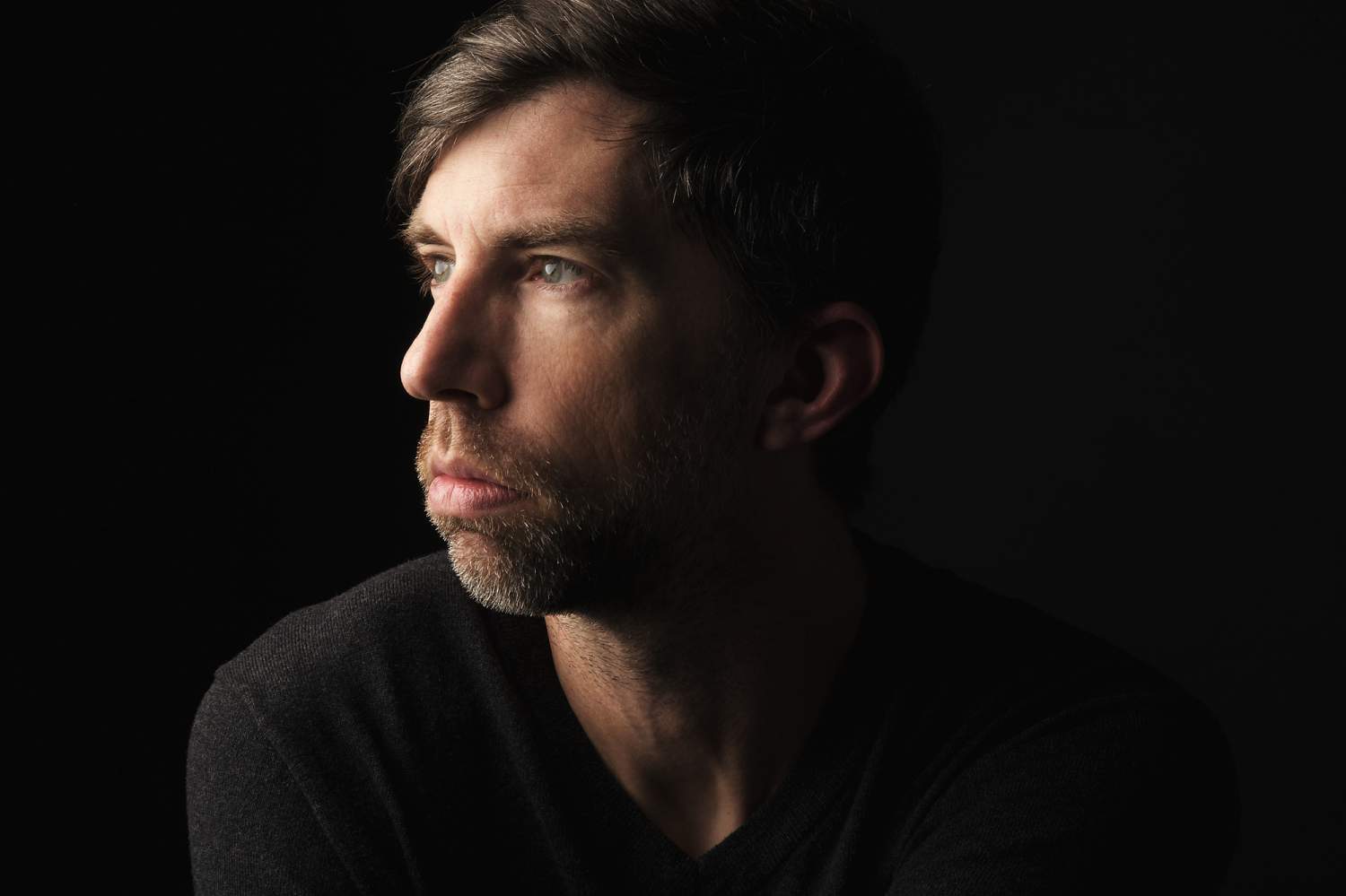 This is the one I went with as my new profile pic.

Thanks for the tips! I was going to try to do some Xmas photos at home this year, this helps a lot! I tried hanging one of my remote speed lights inside a video soft box and it works! The intervalometer is a great idea. Thanks Dave!

I LOVE these shots Dave! I LOVE the light! I lOVE the poses. I am a Nikon aficionado so had to look up some of your "technical tools" and see how they would convert. Taking 252 photos does not surprise me one bit as I did a "back lit" self portrait and managed to do just as many. I would like to participate in a "headshot" pic if for nothing else to learn from you. :)