Last week I set out on a solo trip for the West. On the agenda: hiking, camping and working. My first hike was at Pawnee Pass. An old friend introduced me to this trail years ago, and the altitude got to me before I could even reach the timber line. I had to turn around. I've been wanting to revisit it ever since. 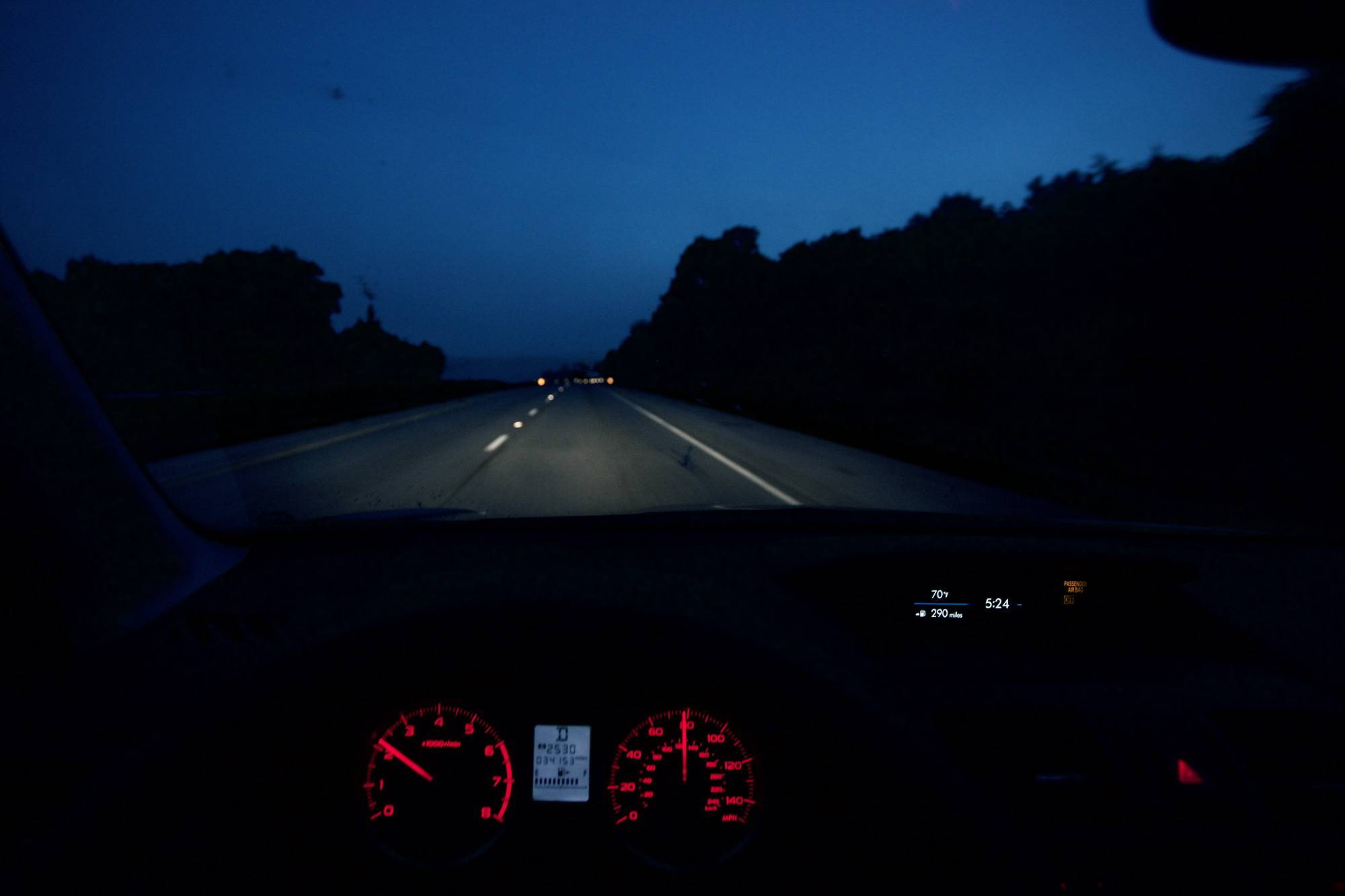 I left at about 4:15am. The sun came up an hour later, and before no time I was in Missouri. 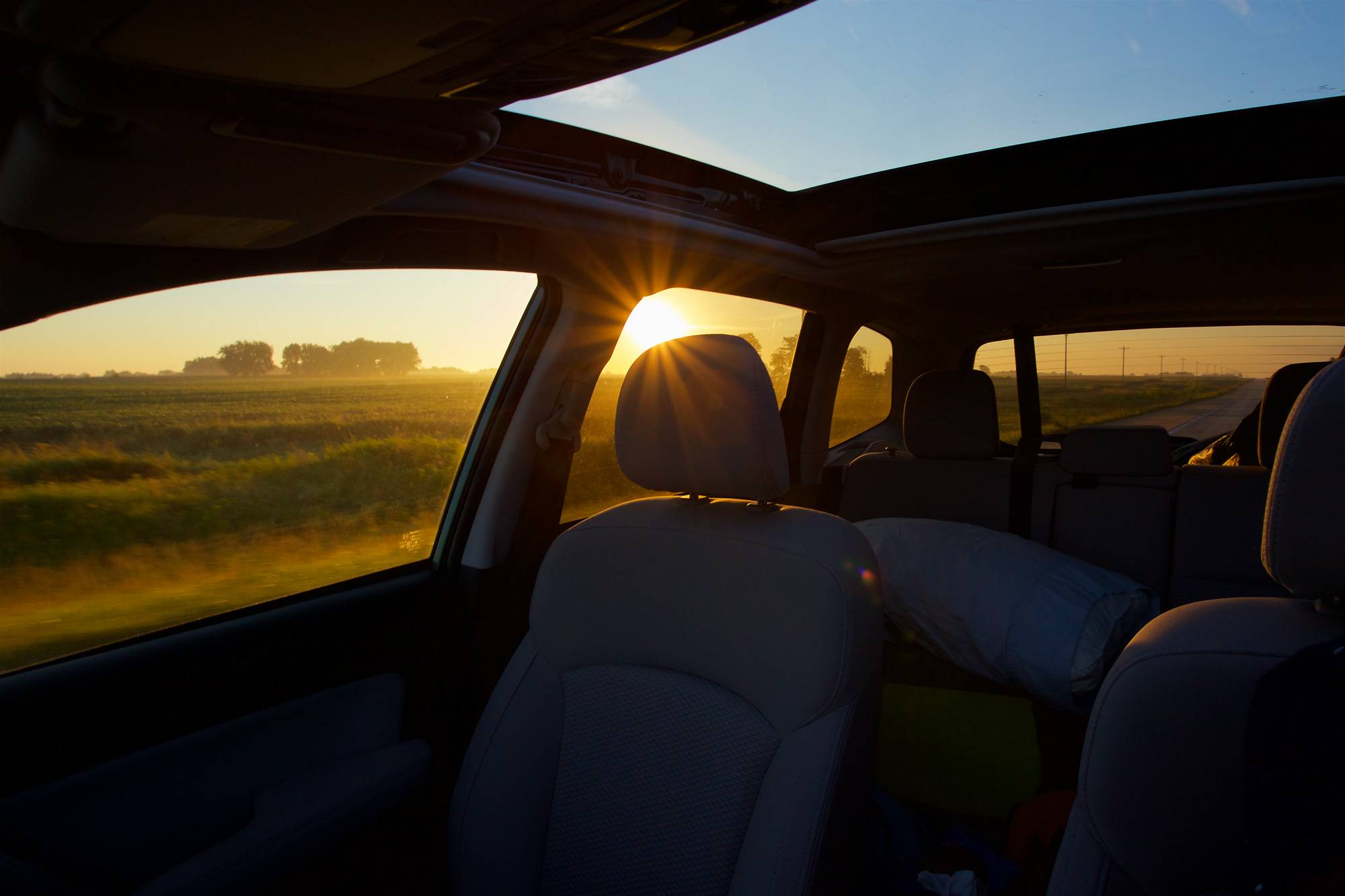 I borrowed my dad's Subaru, as you are legally required to have a Subaru to enter Colorado. Or so it seems from driving around Denver. I packed up all the camping gear I could hastily assemble, a couple bags of food, a bunch of water, not enough clothes and enough electronics and batteries to last a month. 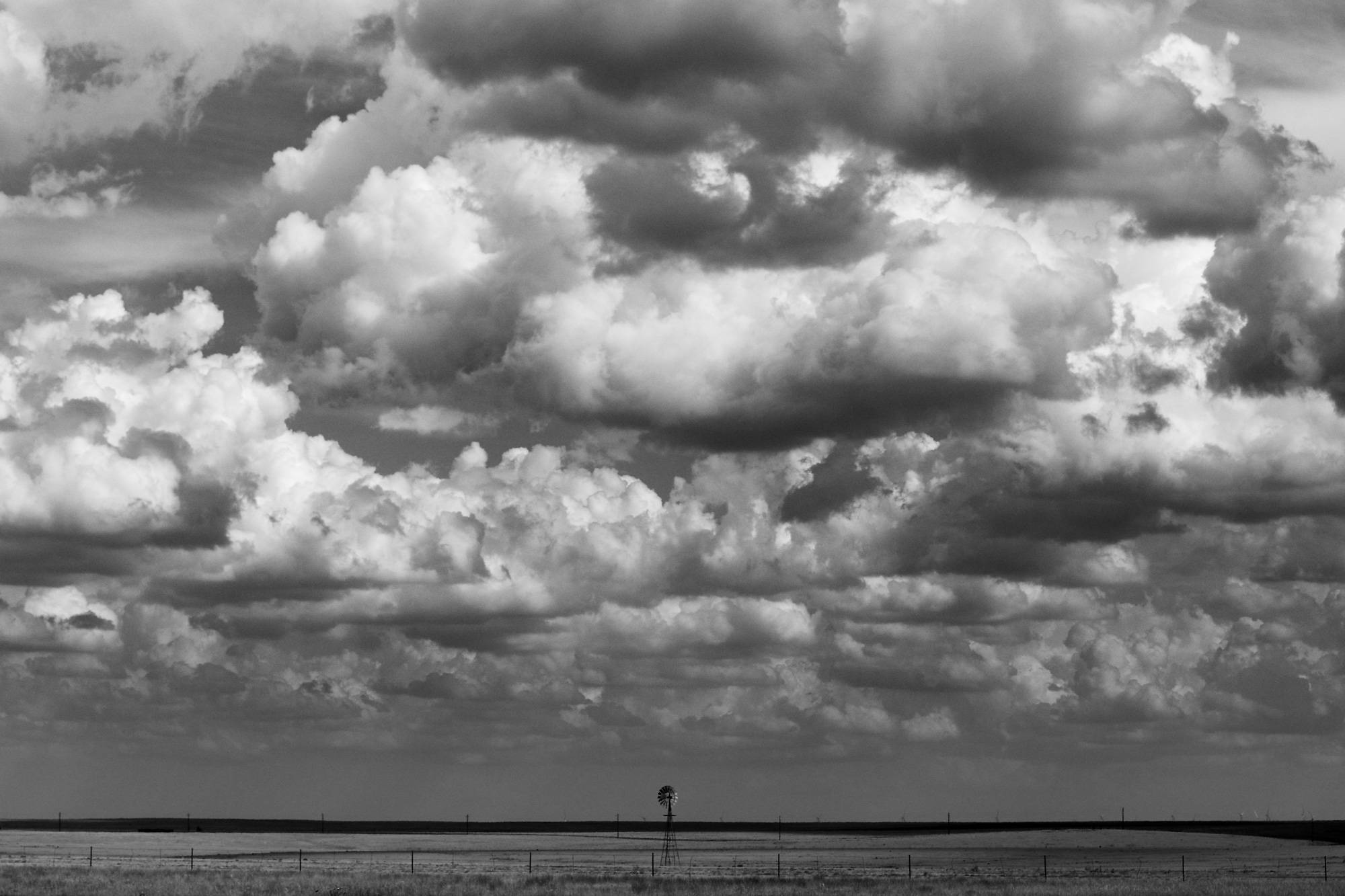 Ah, Kansas. I'm sure there are many beautiful things about Kansas. I haven't found them yet. This photo, like every other photo I've taken in Kansas, is from a moving vehicle. 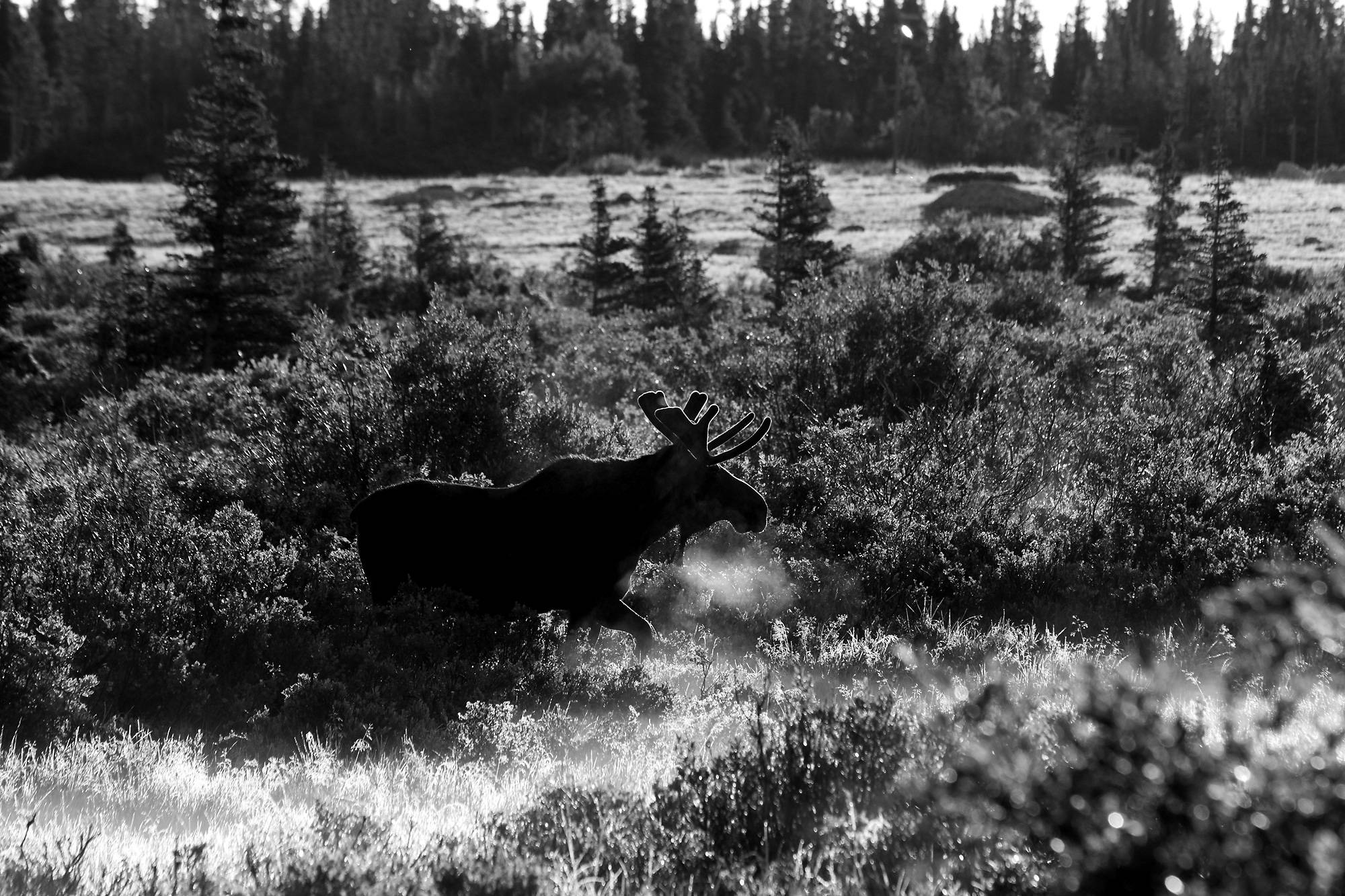 After spending the night in Denver with a friend, I woke up early and headed to Brainard Lake, to the trailhead of Pawnee Pass. Driving to the trailhead, I spotted a couple photographers with large lenses set up on the side of the road. I looked to the right and saw several moose working their way slowly toward the road. Two males got into a fight, locking antlers. I didn't get the camera out until this one was walking away. 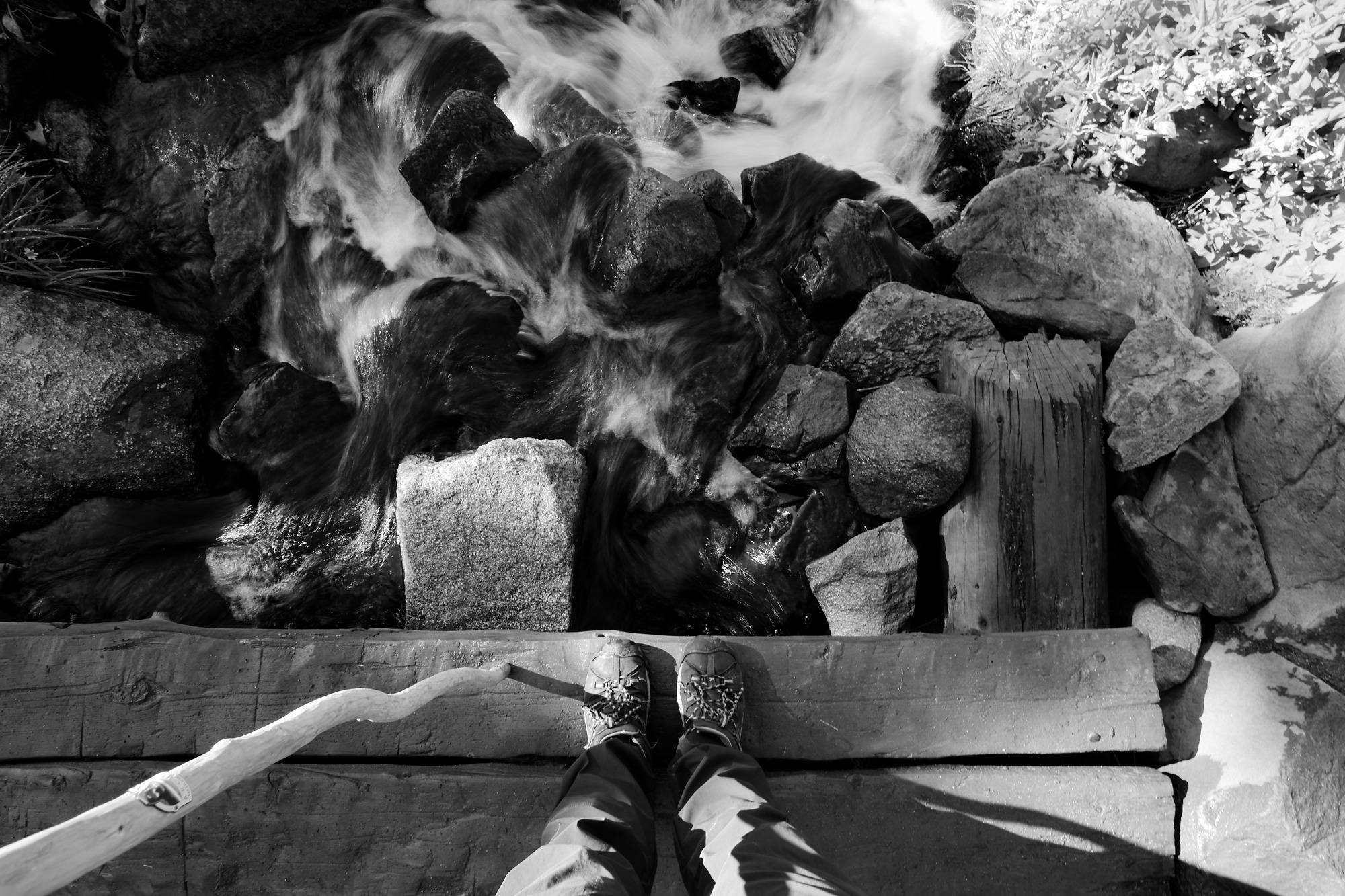 On the hike up there were a few small bridges over flowing creeks. I had my trusty walking stick and a hiking bag full of camera gear, food, water and extra clothes which I did not need. My pack was way too heavy, and I didn't have the chest straps tightened, which put all the weight directly on my shoulders. I didn't correct this problem until the last mile of the hike. It made for some very sore shoulders that night. 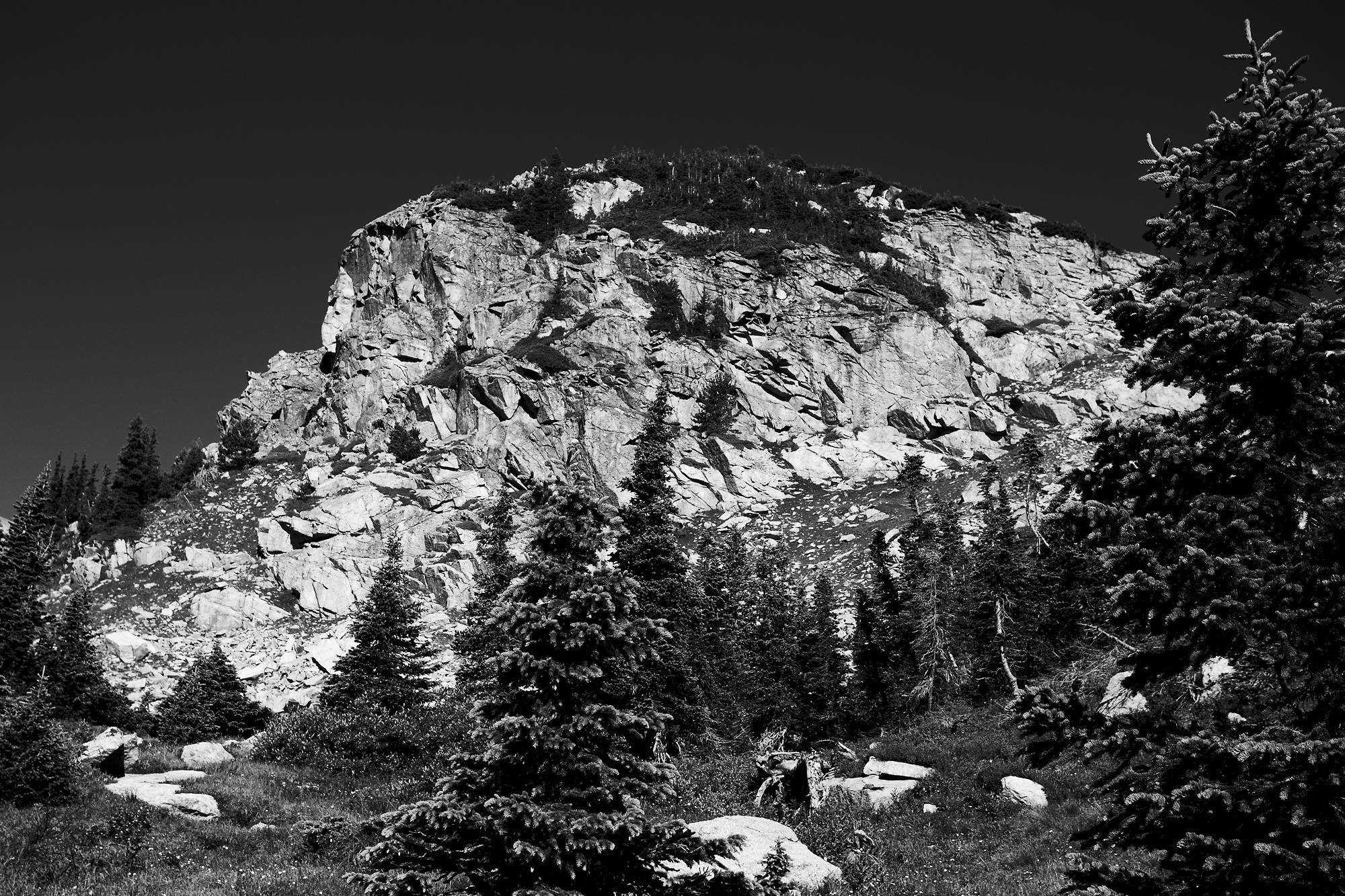 This is looking up toward a false summit that I photographed years ago, from the spot where I had to turn around. I was happy to find myself in great spirits with plenty of energy. I had brought a yellow filter along, and I did some quick tests and decided to commit to black and white photos. The yellow filter helped darken the sky a bit and highlight some yellow-ish colors in the foreground. And it also let me see a more monochromatic image through the viewfinder of the DSLR. The camera records in RAW, which is always color, but the yellow filter forced me to convert everything to grayscale in post. It was a fun choice that led me to find some interesting compositions I might have missed otherwise. 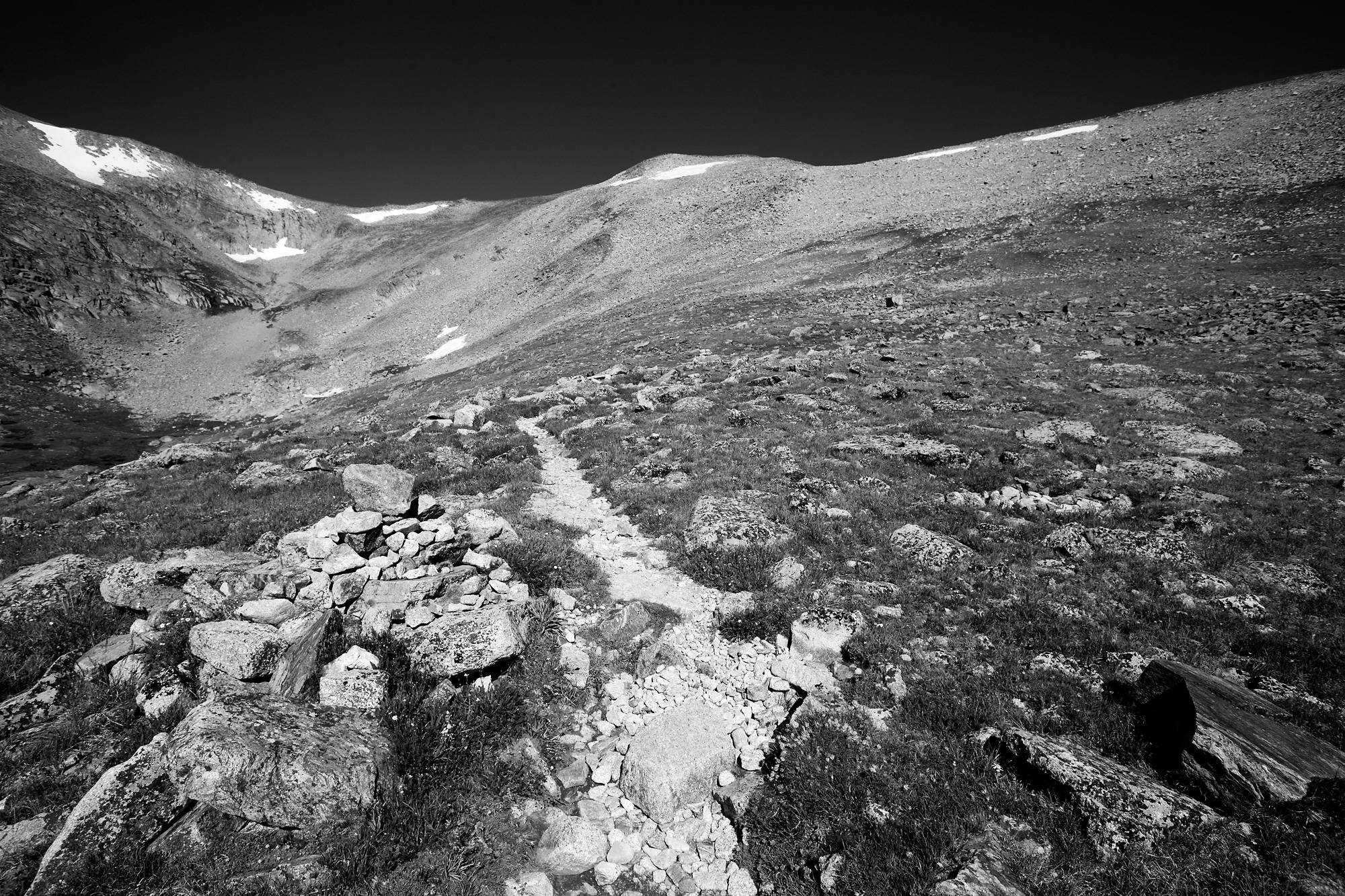 This is past the false summit in the previous photo, above the timber line. I could feel my breathing becoming a bit labored, but I walked slowly and took breaks and was fine. It was beautiful up there. 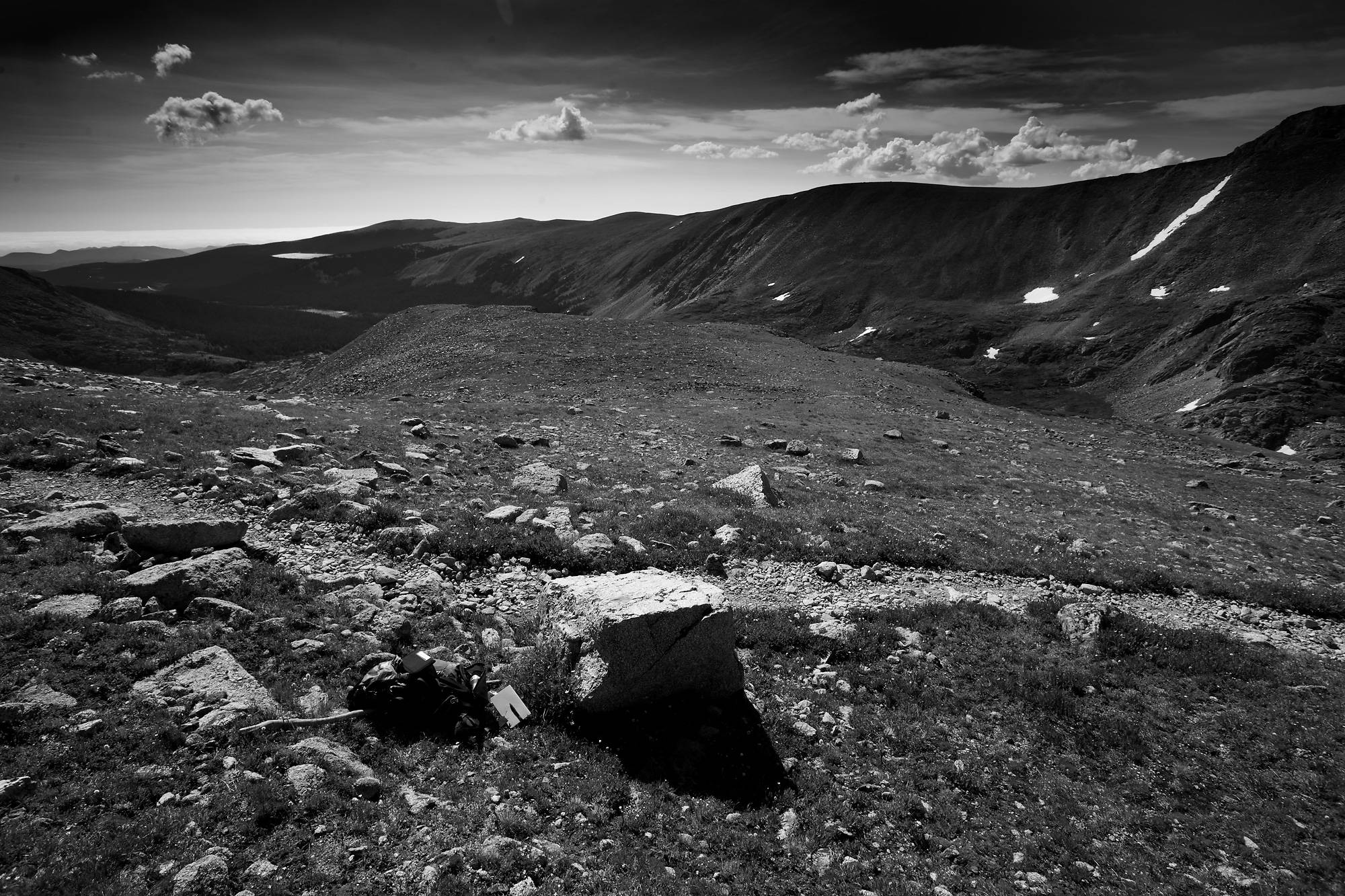 Getting closer to the pass. The higher I climbed, the darker the sky became. I would have made good time if it wasn't for frequent stops to take photos. 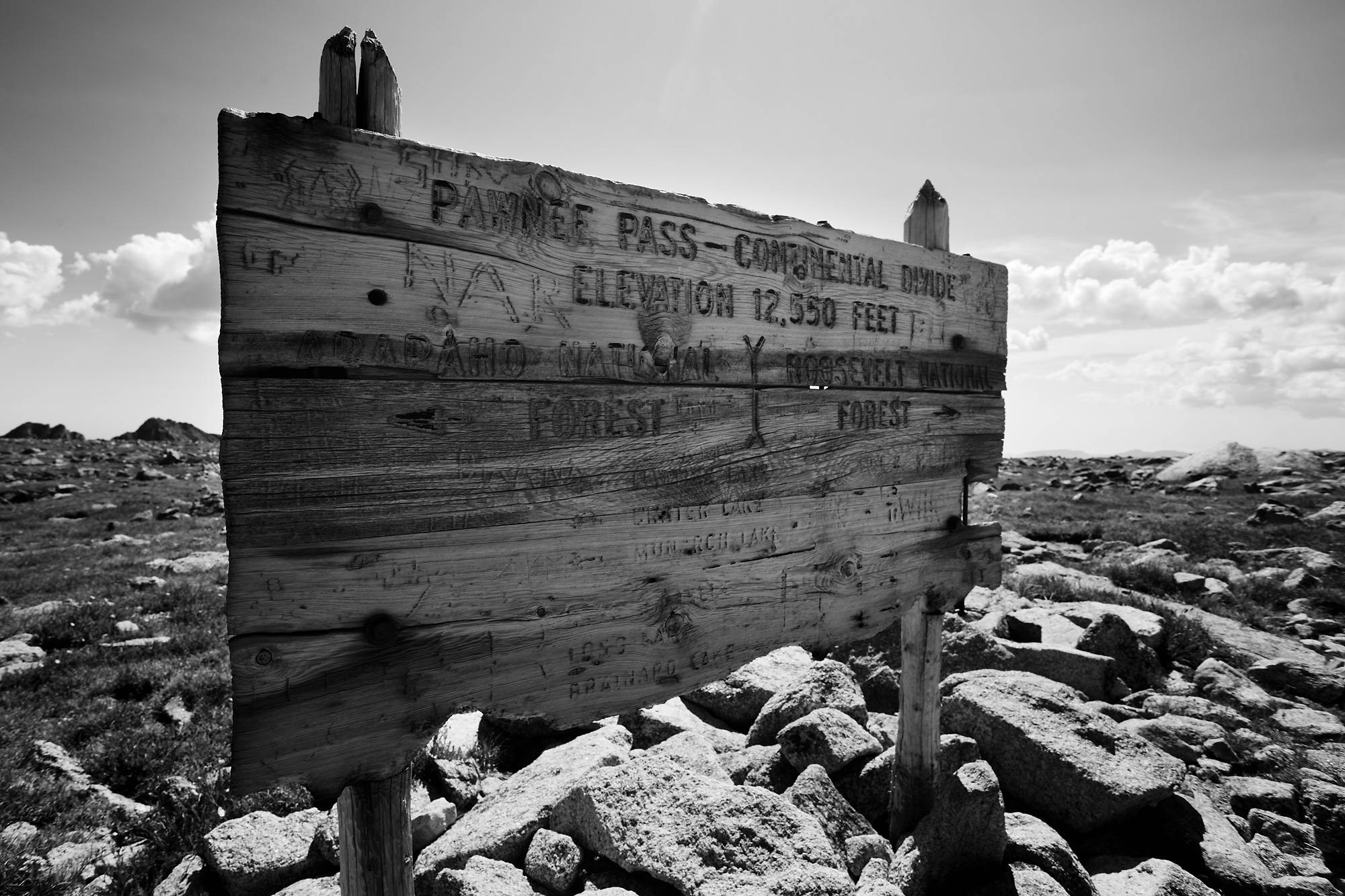 Finally, the pass. From this point, I could see over the mountain to the other side, and it was such a beautiful view. I realized though that the pass was different than the summit, as there was still quite a bit more mountain to climb off to my right. I wandered around the area a bit shooting photos and decided that I had to keep climbing. 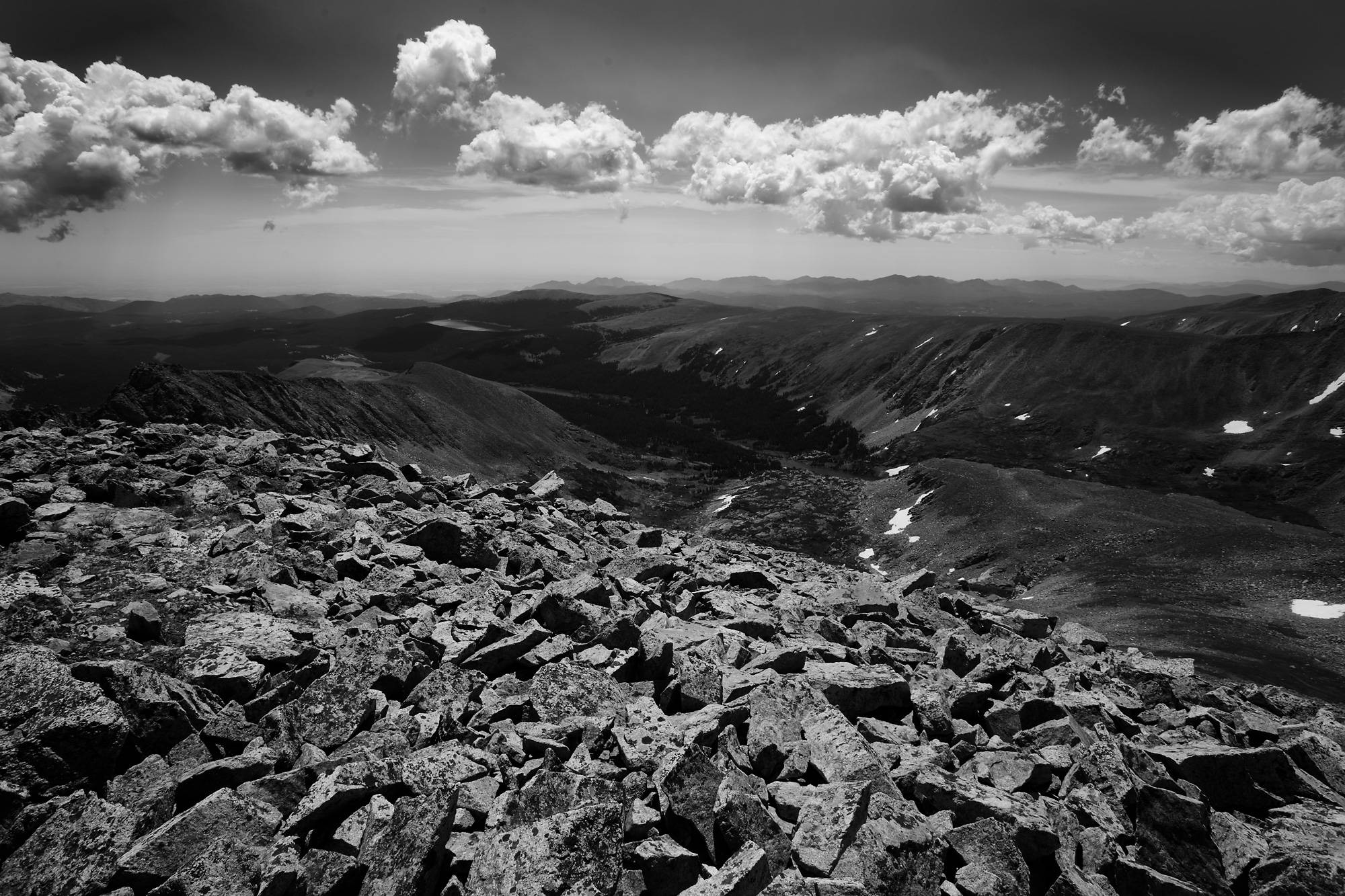 The view from the summit was awesome. I found a good rock to perch myself upon and had a nice lunch. Then I walked around and shot some photos, realizing immediately how poorly they would actually convey the experience of being on top of the mountain. 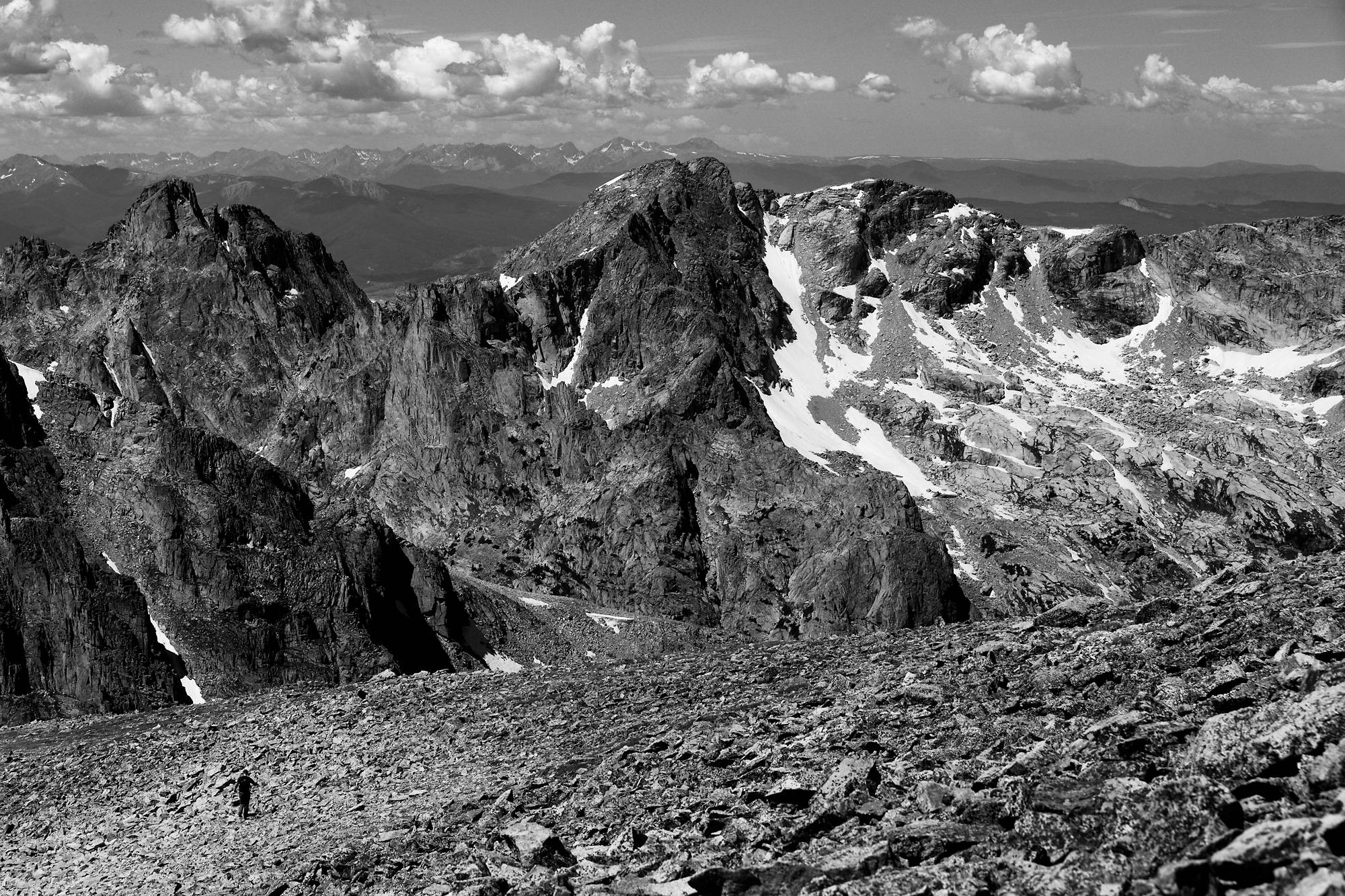 The last leg of the trail up to the summit was tough to follow in places, with the trail disappearing in huge fields of rocks. Here's another hiker working their way up to the top. 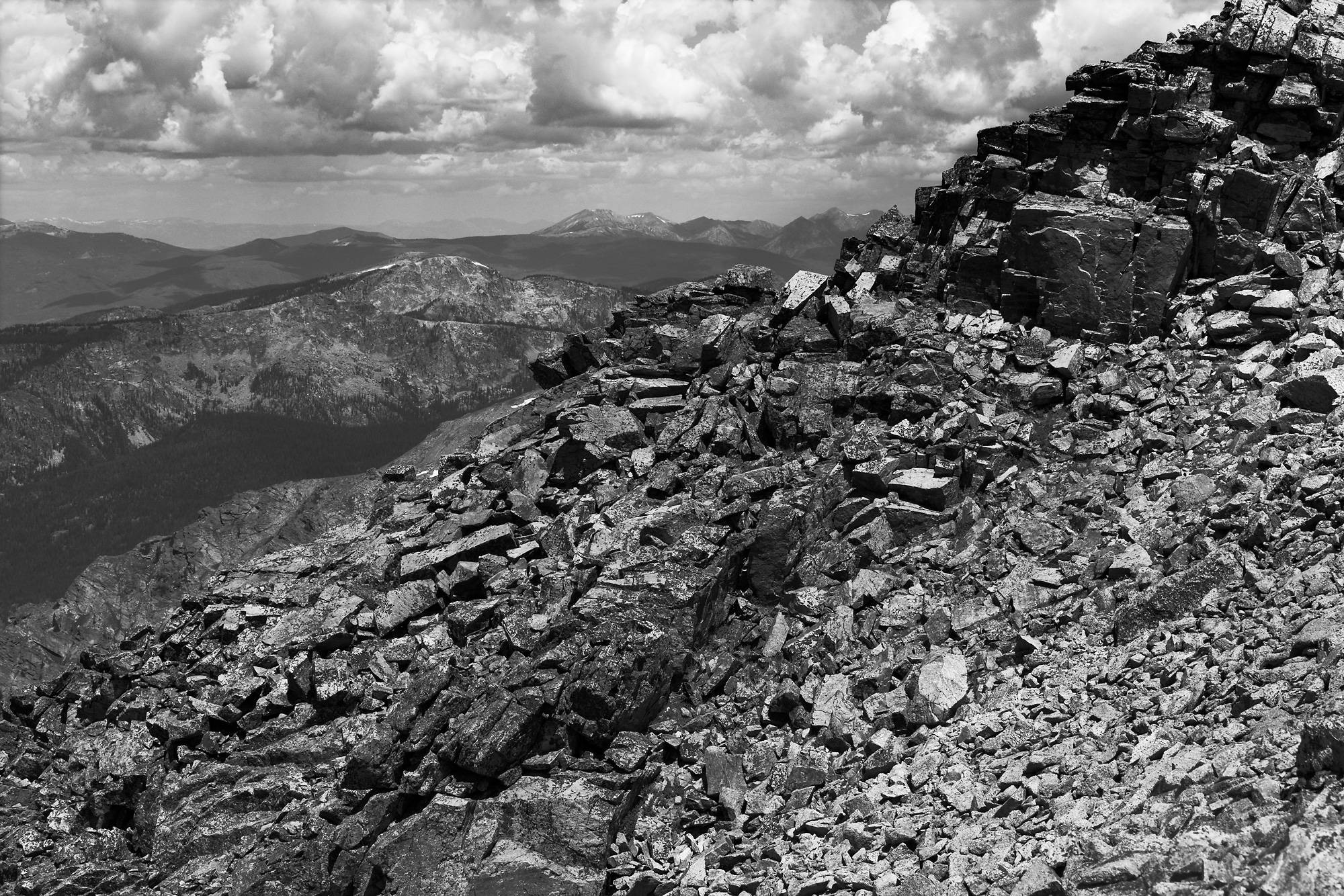 This photo lacks anything for scale, but I love the combination of the texture of rock, clouds and the distant mountains. It was a beautiful day, and it was obvious that the environment was not always this hospitable.

After a nice time at the time, I decided to head back down. It was an easy hike down. Much faster than the way up. A small group of people are working their way up the trail in the bottom-right corner of the above photo. 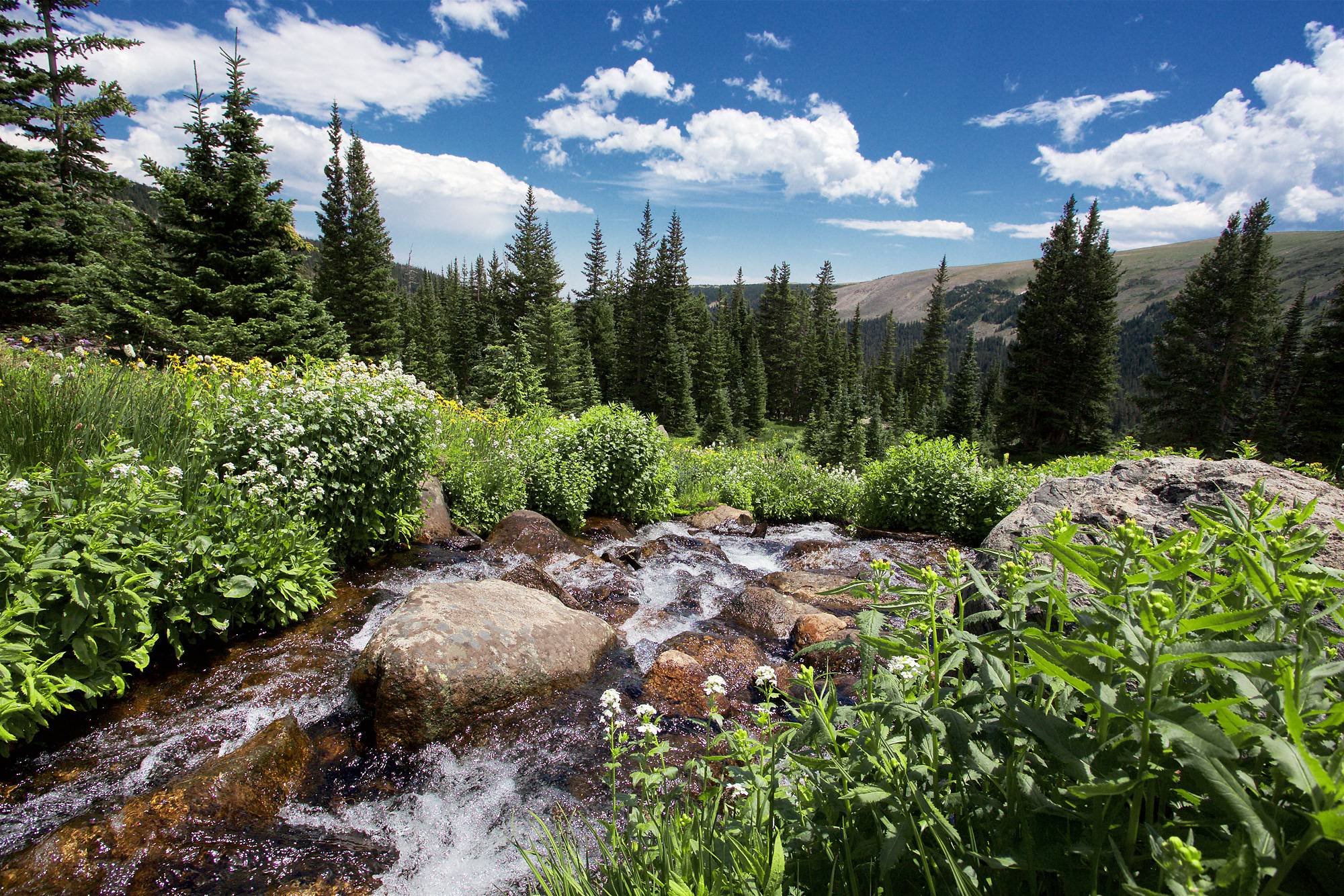 On the hike down, I decided to remove the yellow filter a shoot some color photos. Not captured in this photo: the wonderful sound of the stream and the crisp air, rich with the smell of pine trees. 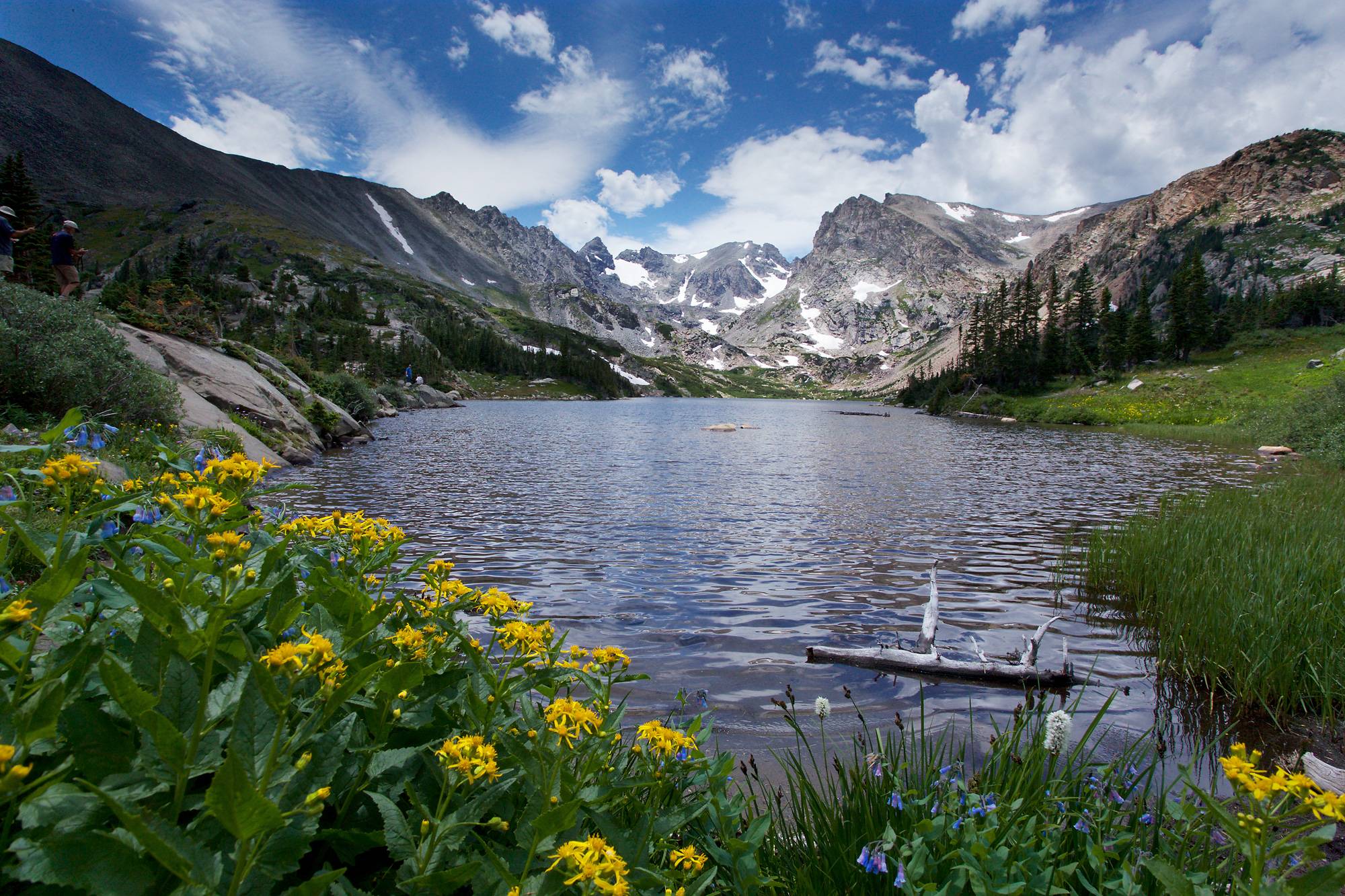 I made one last detour on the way down to get this view of Lake Isabelle. I had to forcibly back myself into a prickly bush to get this angle with the yellow flowers in the foreground. But what a view. 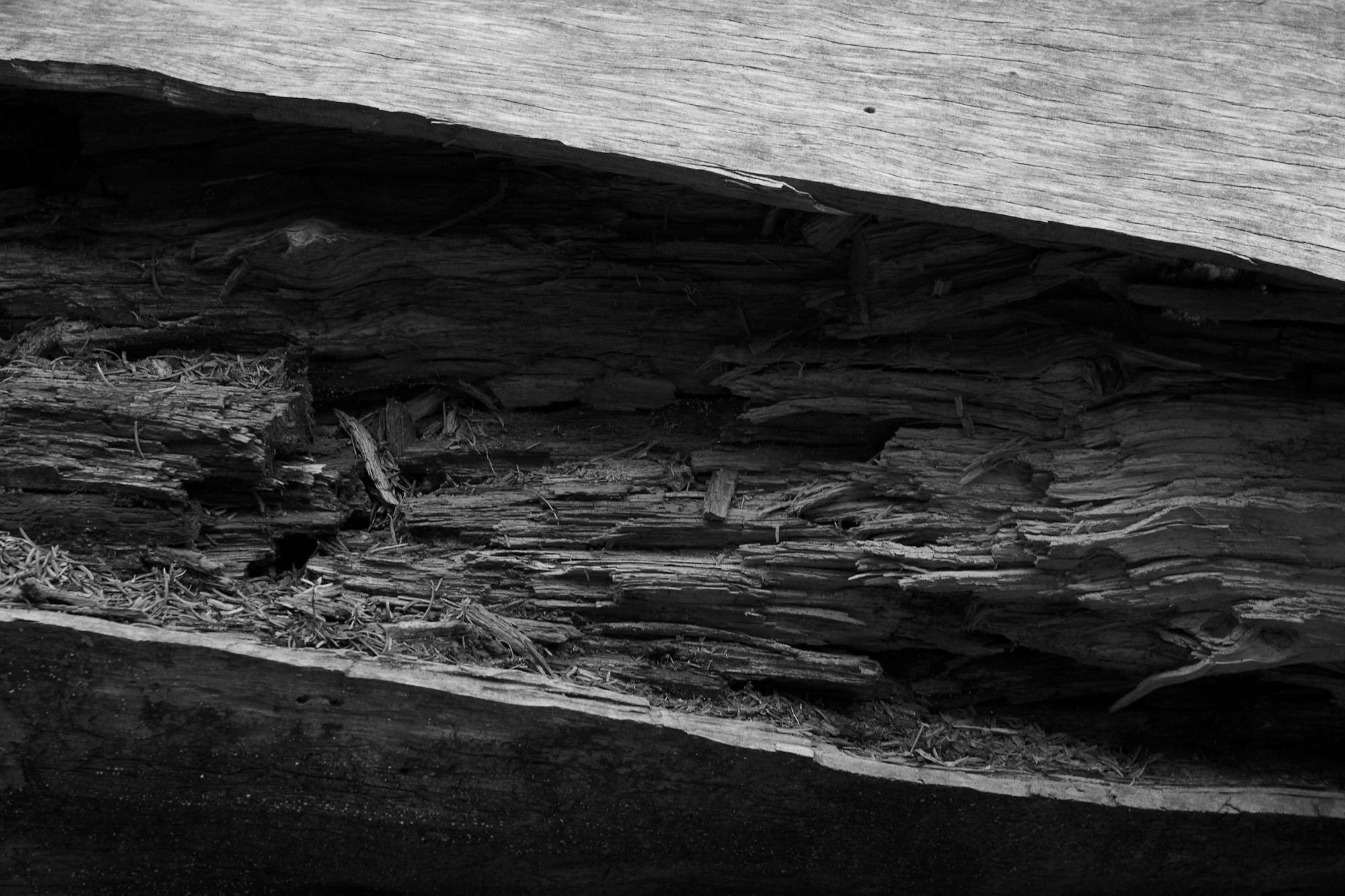 Almost back to the parking lot, I couldn't help but put the yellow filter back on for a black and white photo of this fallen tree.

It was an absolutely wonderful hike. It felt so good to be able to complete the trail after having to give up years ago. It was great being able to hike at my own pace, taking photos along the way. And it was a great start to an adventurous week that I will post more about in the coming days.