After I renovated the basement and built my new office, one remaining detail was to install a covering for the new window. This particular window presented a couple unique challenges. The window itself tilts open, projecting far past the plane of the inside trim (ruling out any sort of normal blinds). And I wanted something that could lock, preventing (or at least slowing down) any potential break-ins.

While shopping at Lowe's one night, I saw a display for a hinged window cover that was kind of like a little door. It had rotating horizontal blinds in the middle to let in light or block the view. It looked great, and I realized I should build my own. 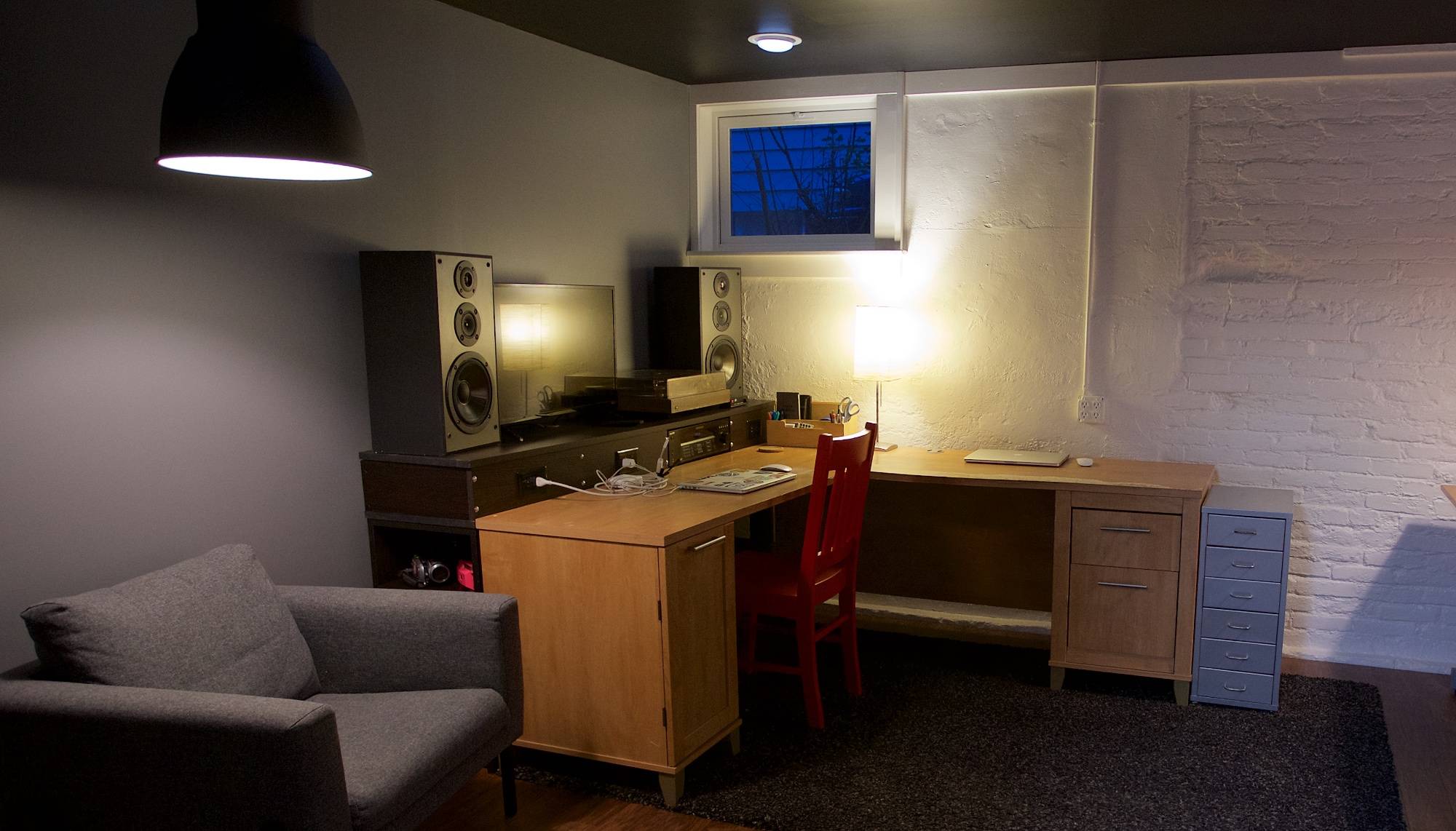 The window is close to the corner, and I decided the cover would look best if it was hinged on the side closest to the corner. Unfortunately this meant that the thickness of the window cover had to be less than one inch so that the window itself would have clearance to open. 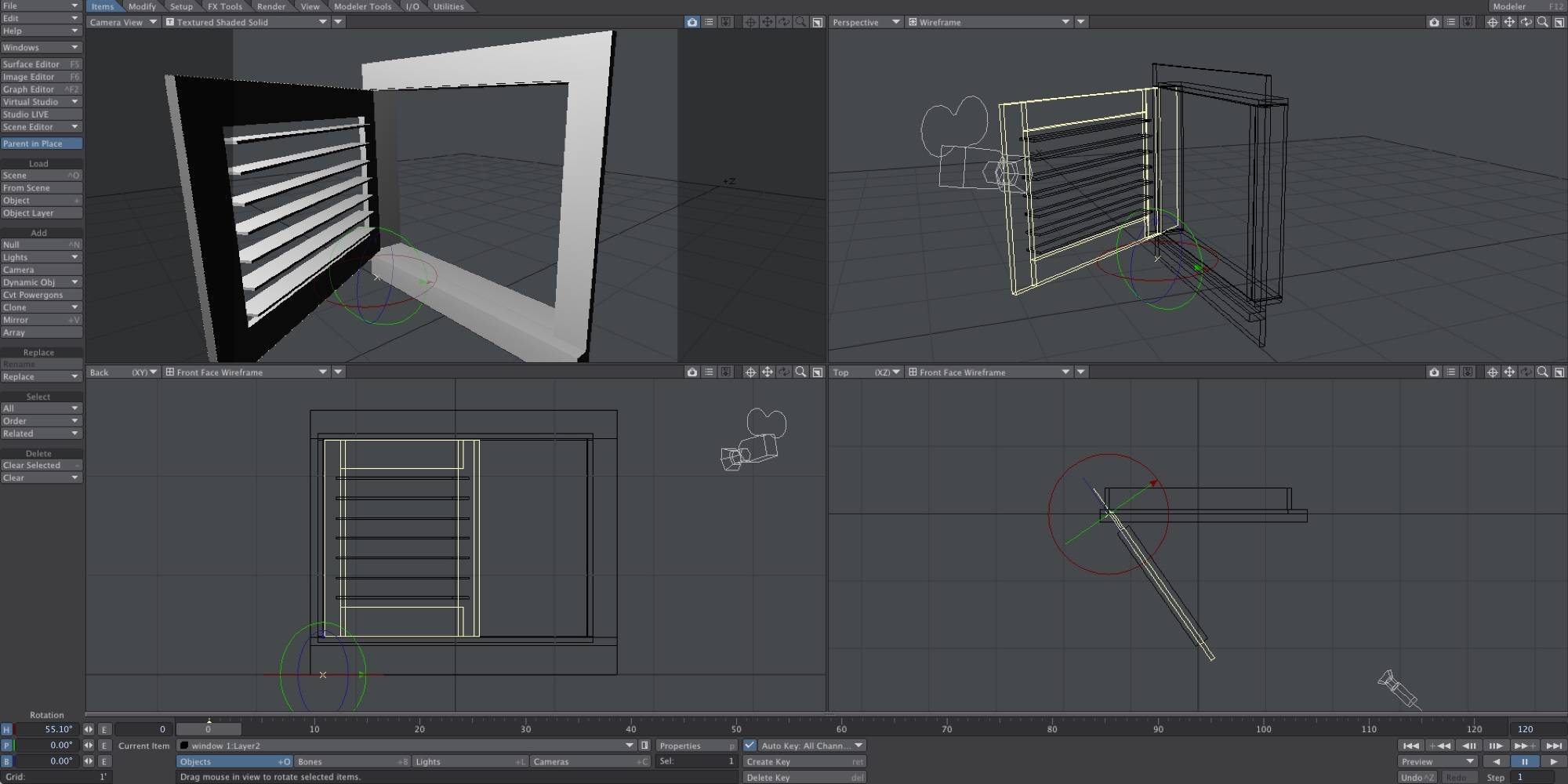 I used my 3D program (which I used to design the office) to build a virtual window. It looked good, but I still wasn't totally sure how all the moving pieces would come together. 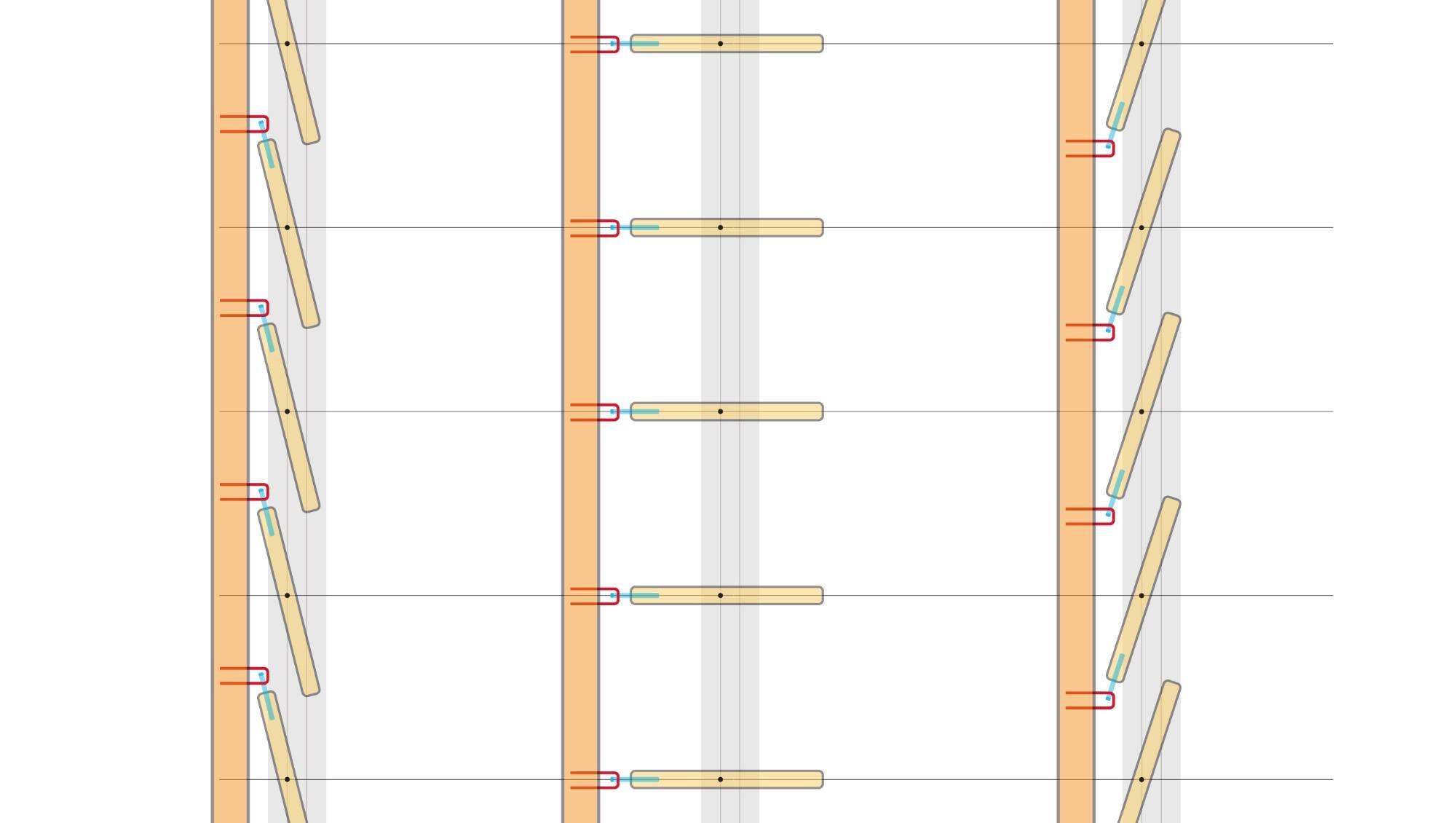 So I drew up some side-view schematics at an exact scale to see how much movement all the pieces would have. And it looked good. So it was time to head to the workshop. 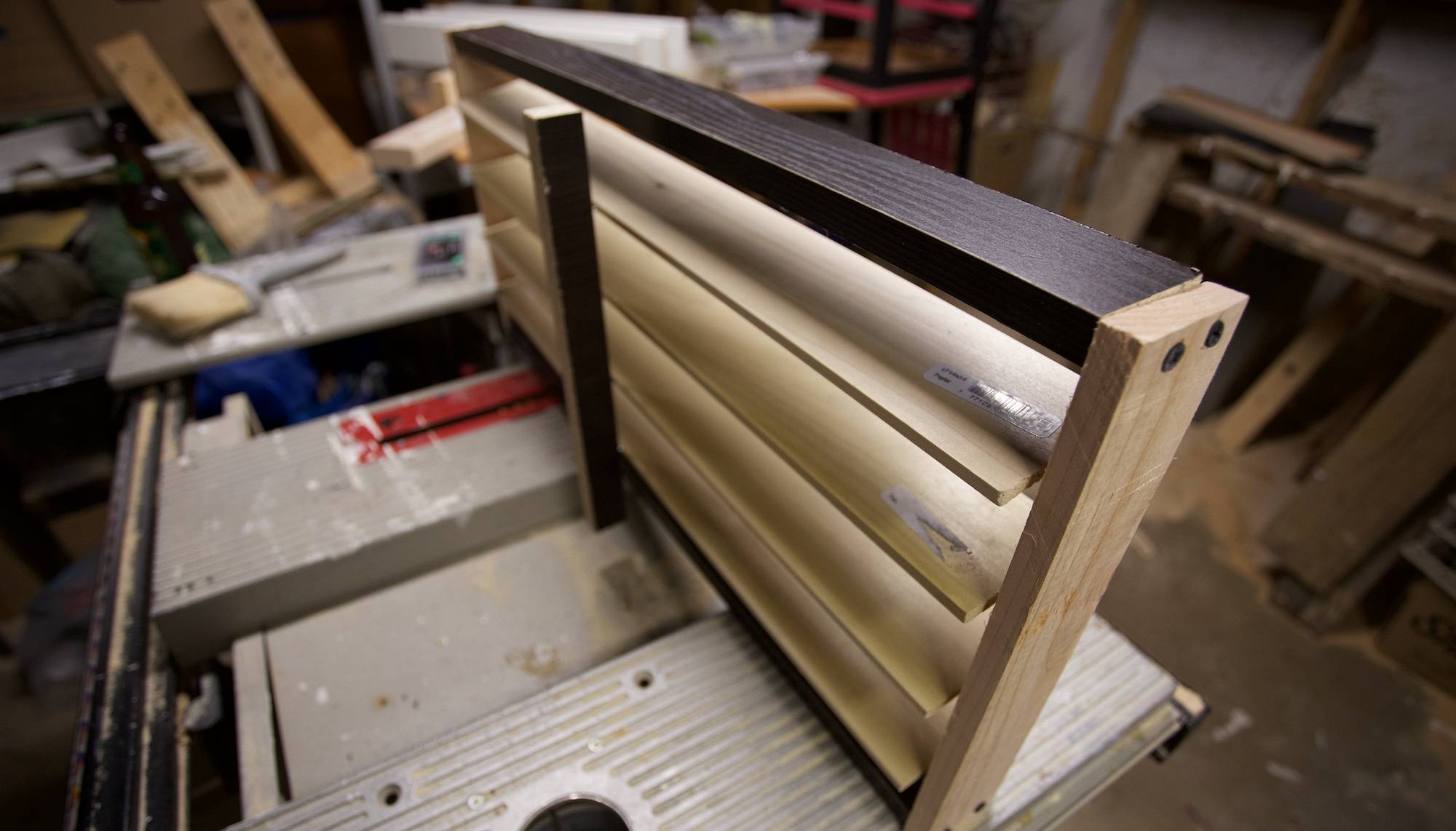 I built a quick mockup with scraps to make sure the moving pieces would move correctly. Worked like a charm. 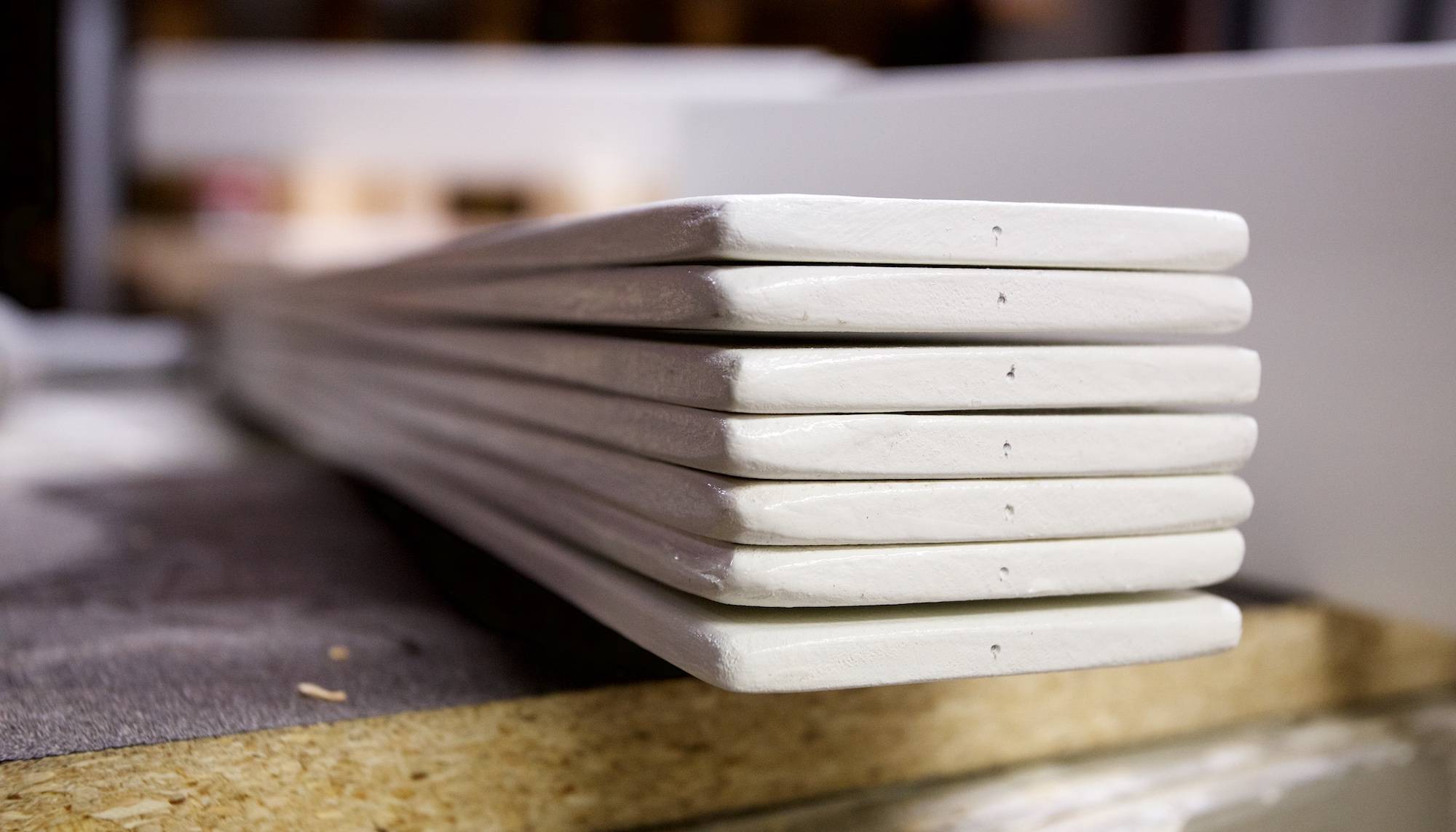 There's probably a name for these pieces. Anyway, I cut them all, primed and painted them and pre-dilled little holes in the ends. At this point, I was just following dimensions from the computer mockup and hoping everything would come together in the end. 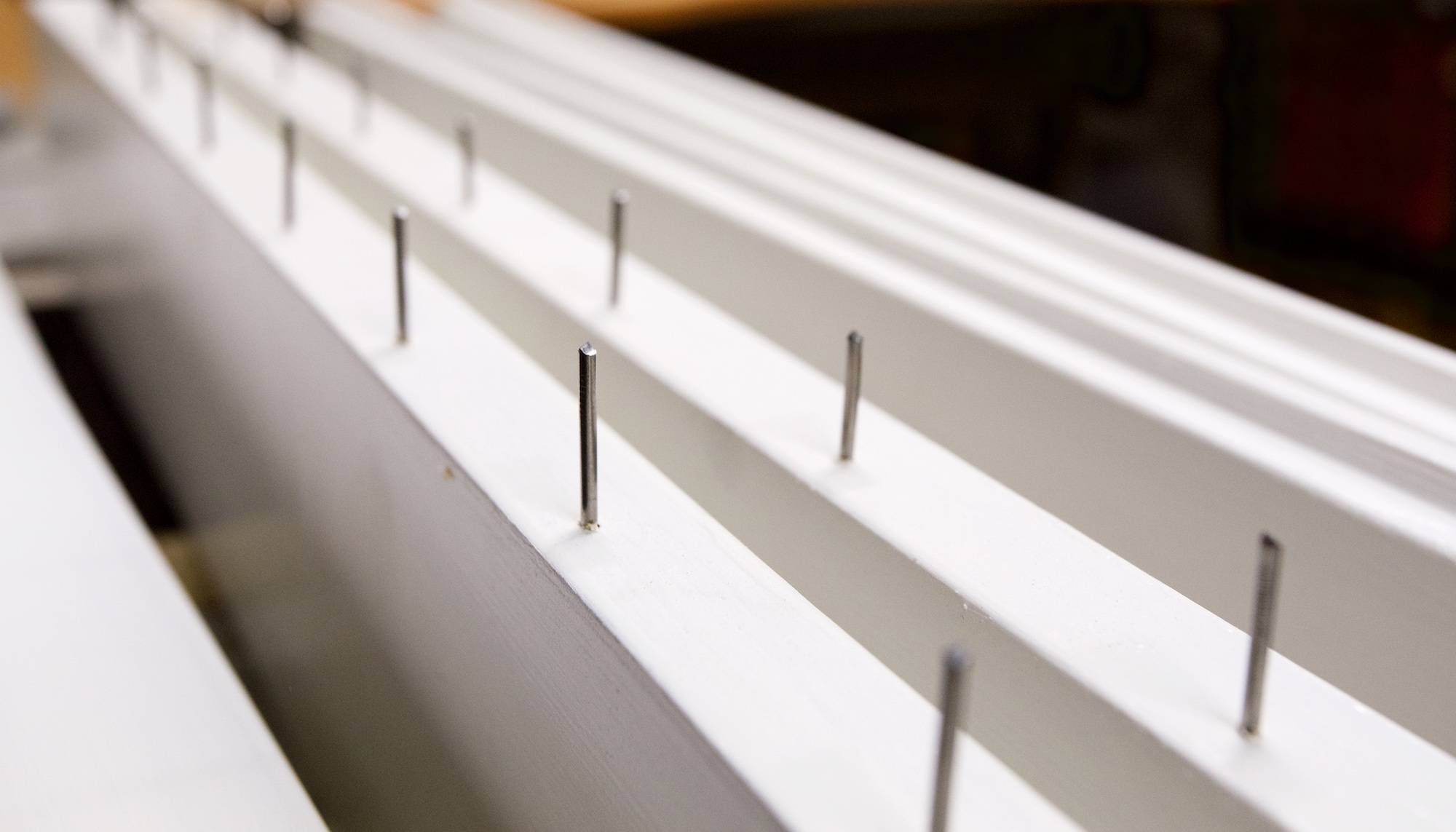 I cut and finished all the frame pieces too. I printed templates for each edge so I could precisely position the position for each nail. I just used some finishing nails I had on hand, and once I hammered them in a bit, I cut off the heads. These would act as the pins that connected all the slats and let them pivot. I found some little plastic washer things that sit on each nail between the frame and the slat, to give a little spacing and prevent the slats from sliding sideways and sticking to the frame. 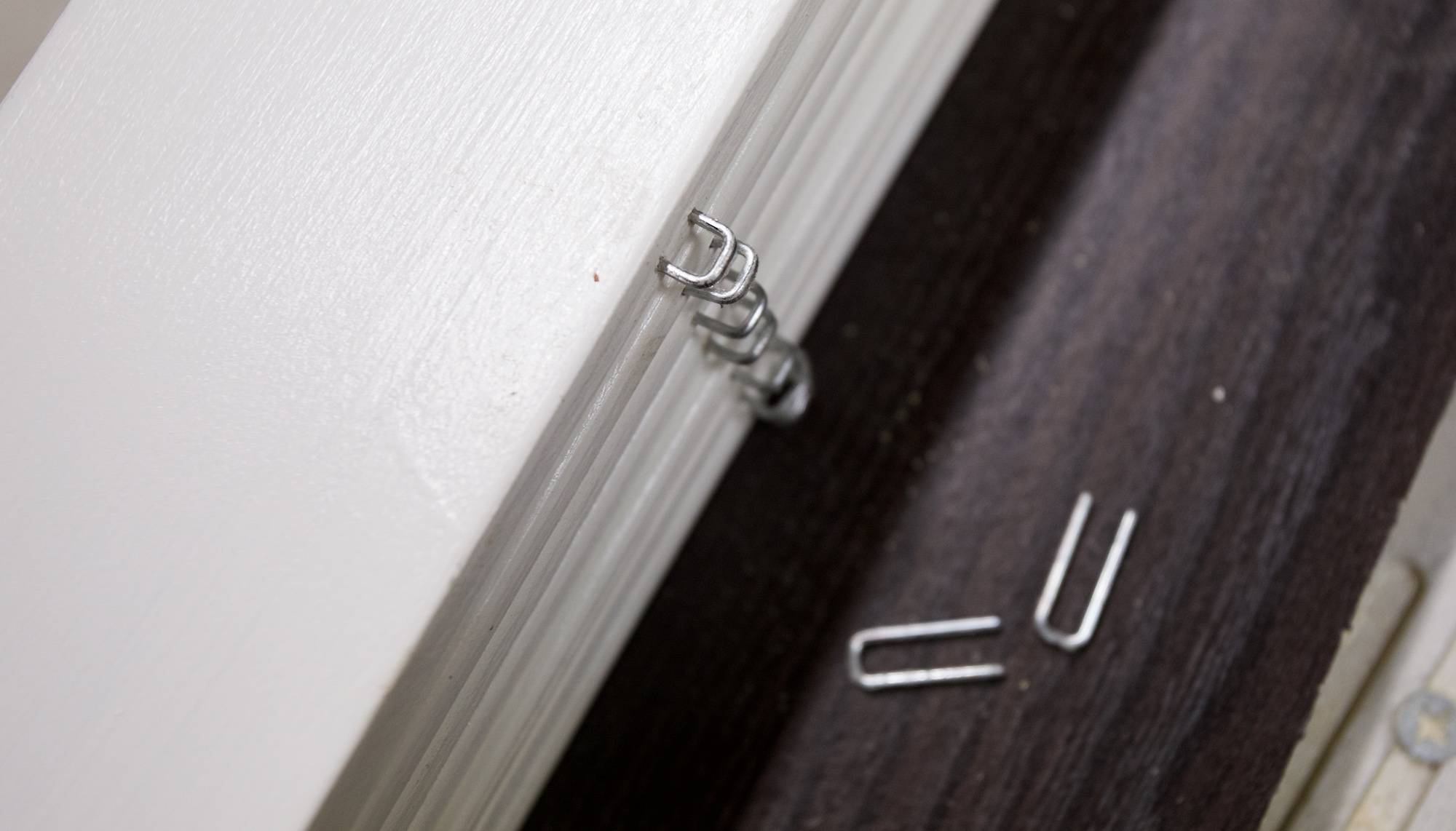 To connect the vertical "handle" piece in front that opens and closes the slats, I used the skinniest staples that I could find. One goes on the slat, and one goes on the back of the "handle." 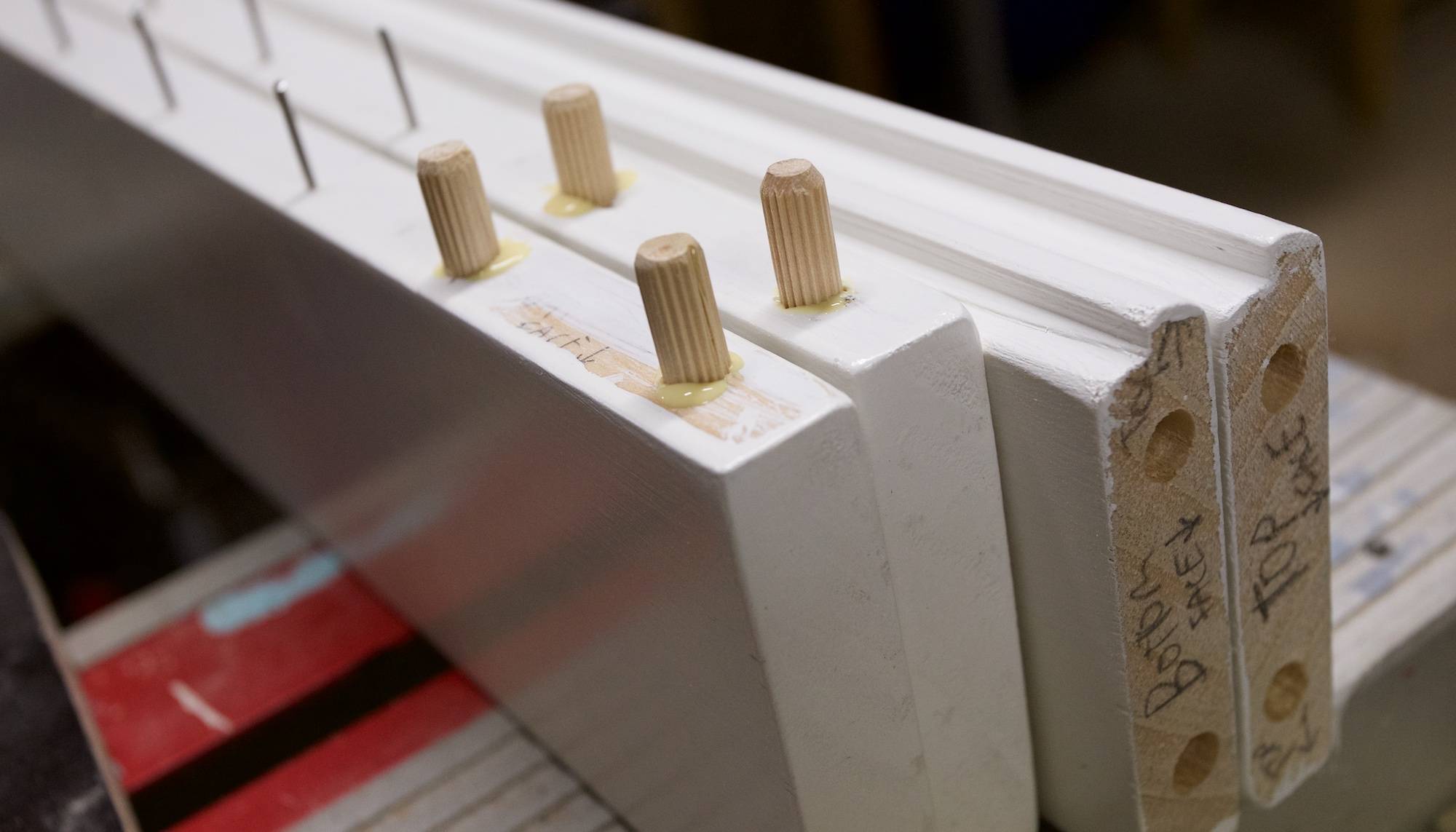 The frame connects with dowels and wood glue. I also totally cheated and used some flat metal L brackets on the back, because why not. 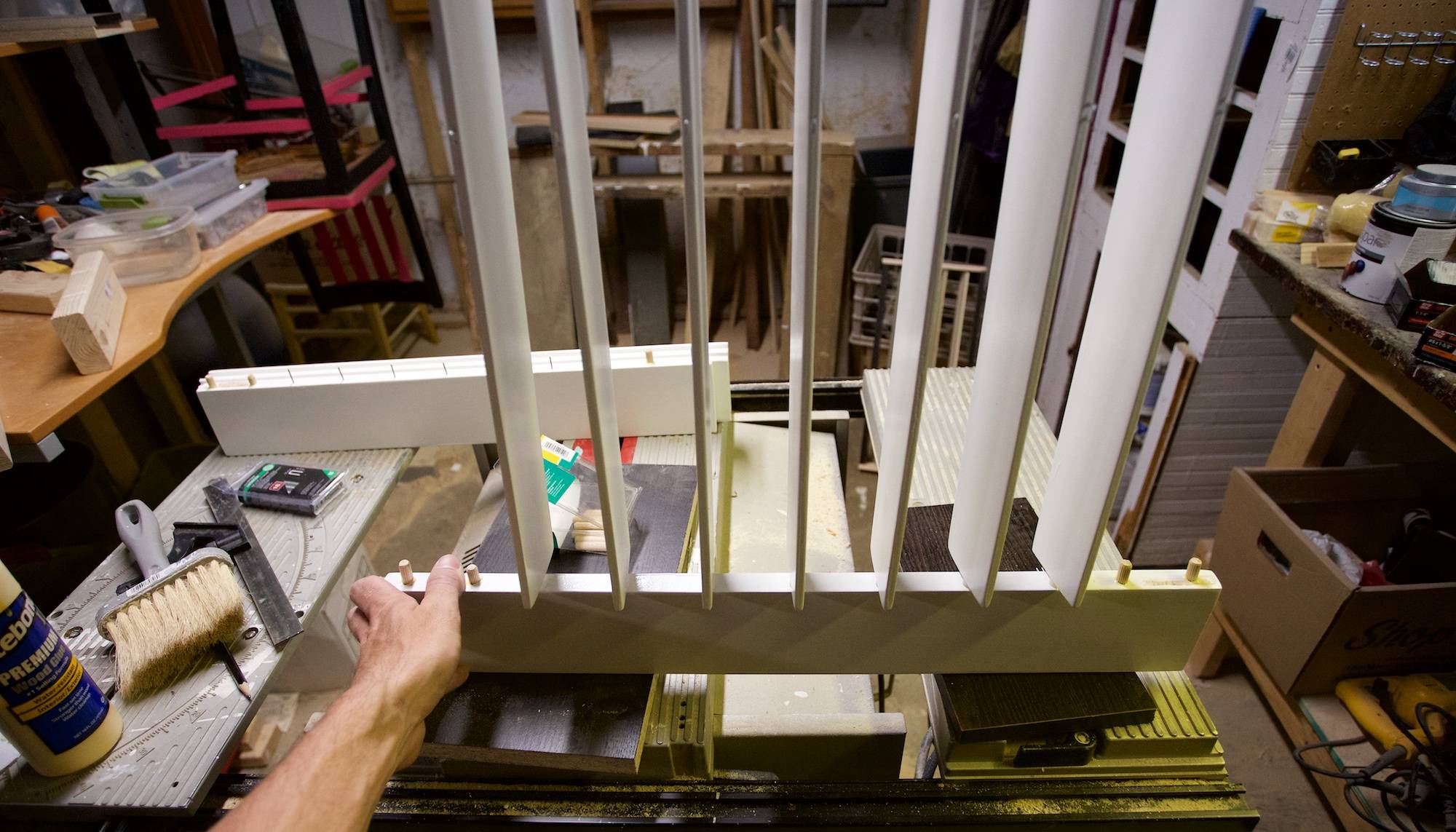 The assembly process was kind of a mess. All the slats had to be inserted on one side of the frame, which wasn't hard. Then I put on the top and bottom pieces of the frame, which weren't bad either. But the final piece of framing had to fit onto 4 dowels, and it had nails that fit into each of the 7 slats. Getting them all to align at once so I could push it on was quite tedious. 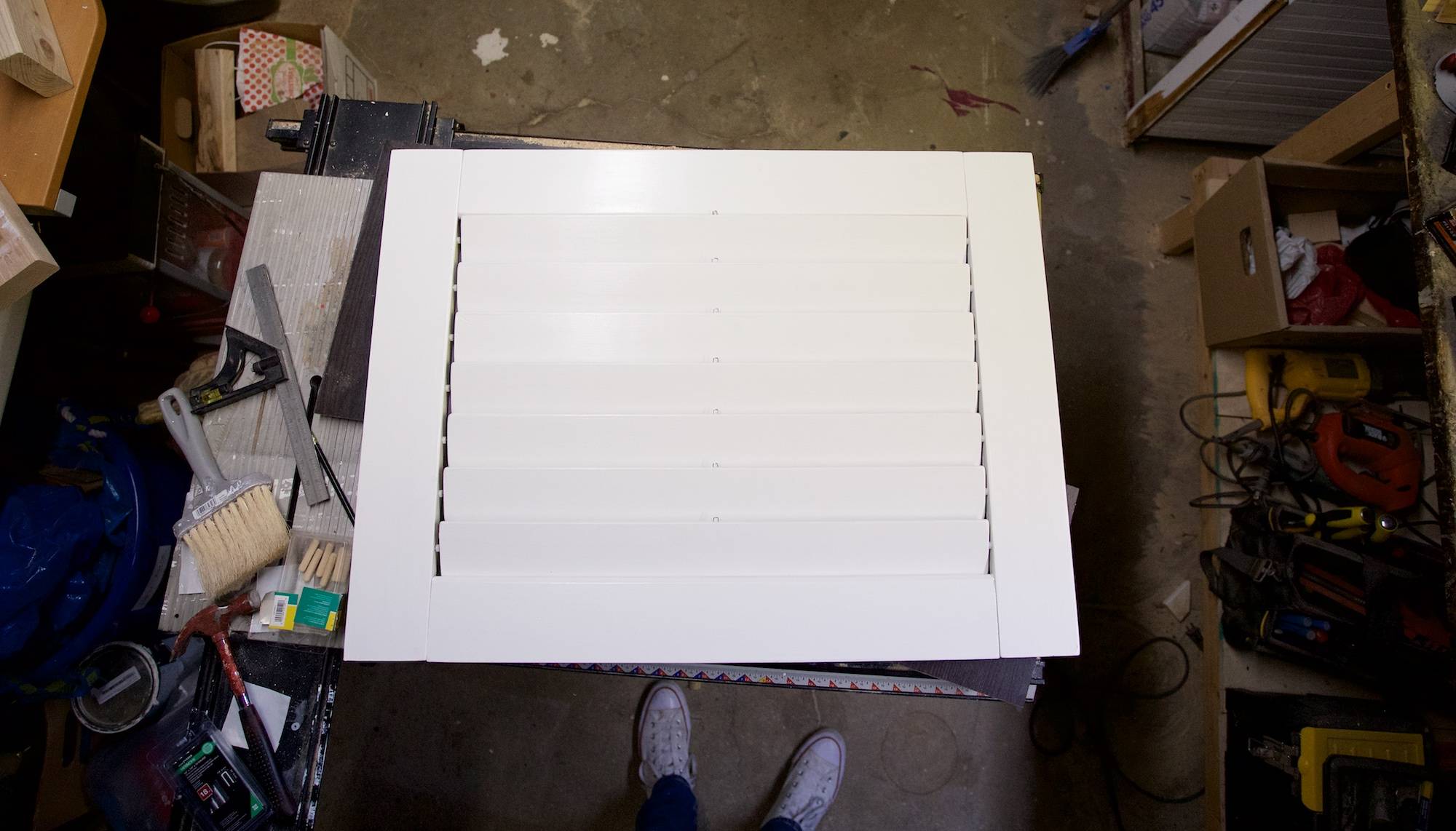 The window cover, fully assembled. I clamped it down and let the glue dry overnight. Then I touched up the paint in the morning, and it was ready to install. 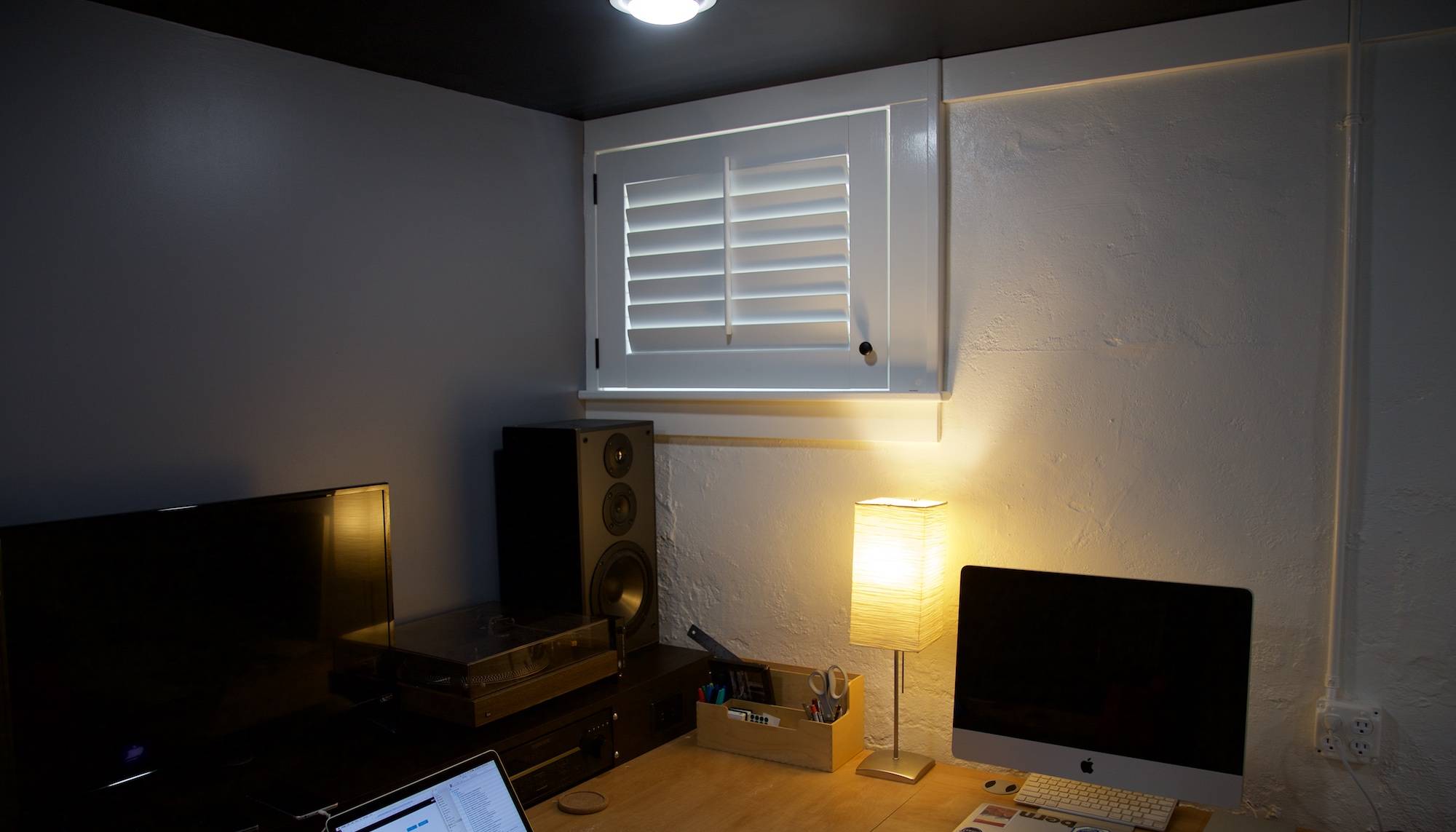 And would you believe... it actually fit, on the first try. 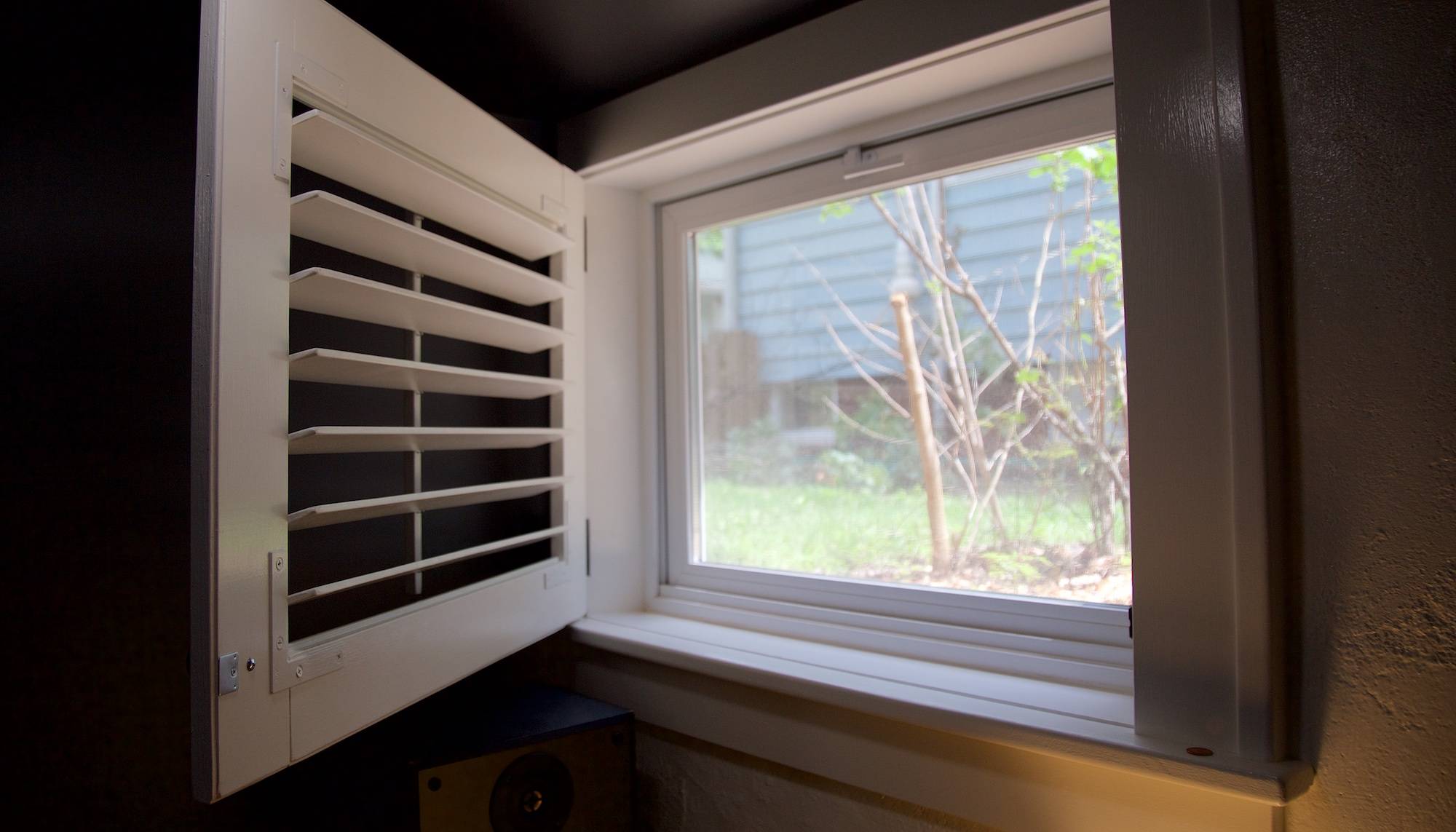 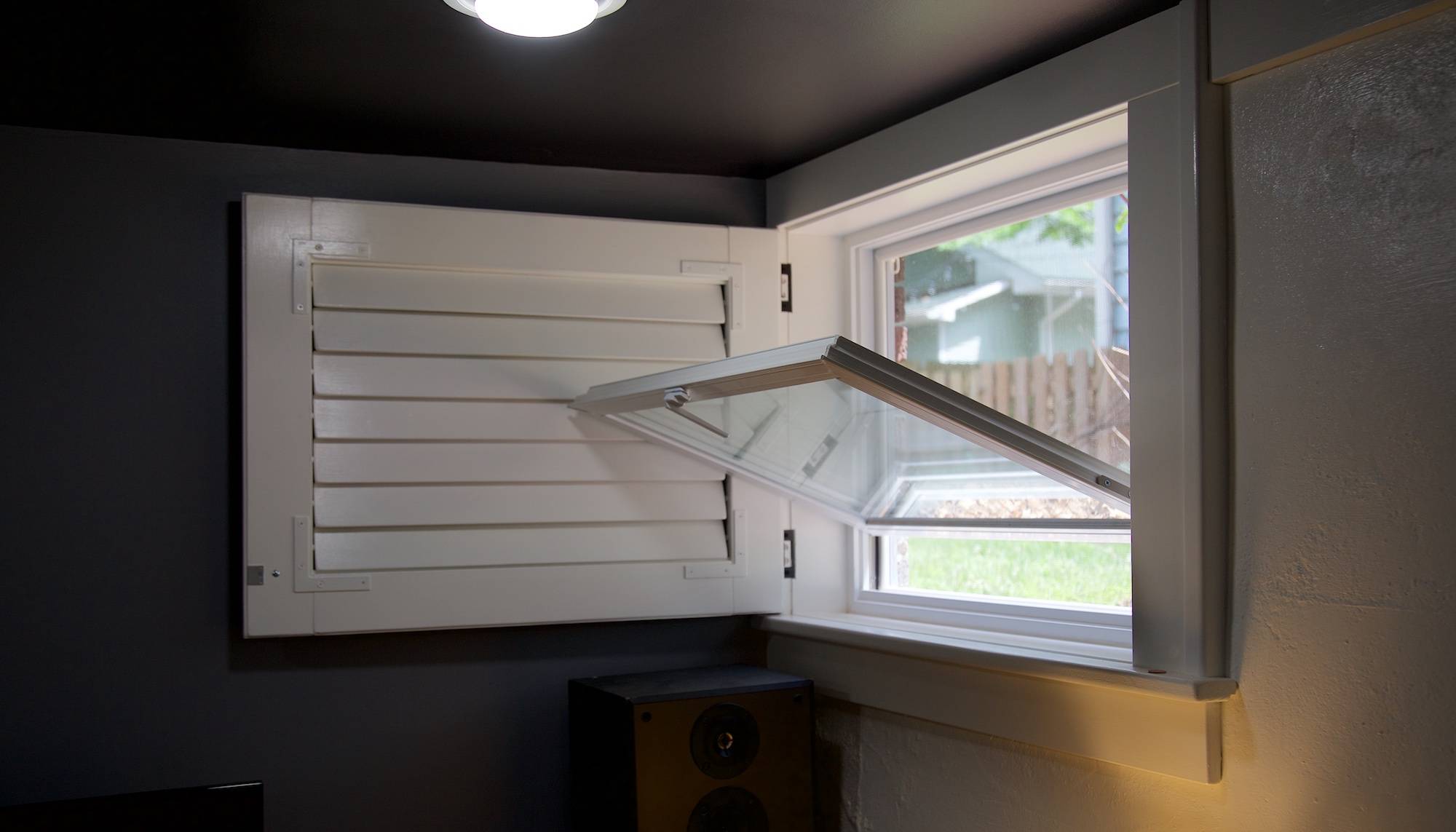 And when it's opened all the way, the window itself can still open. Chalk up a big win for computer design. I would have never come up with this on my own otherwise. 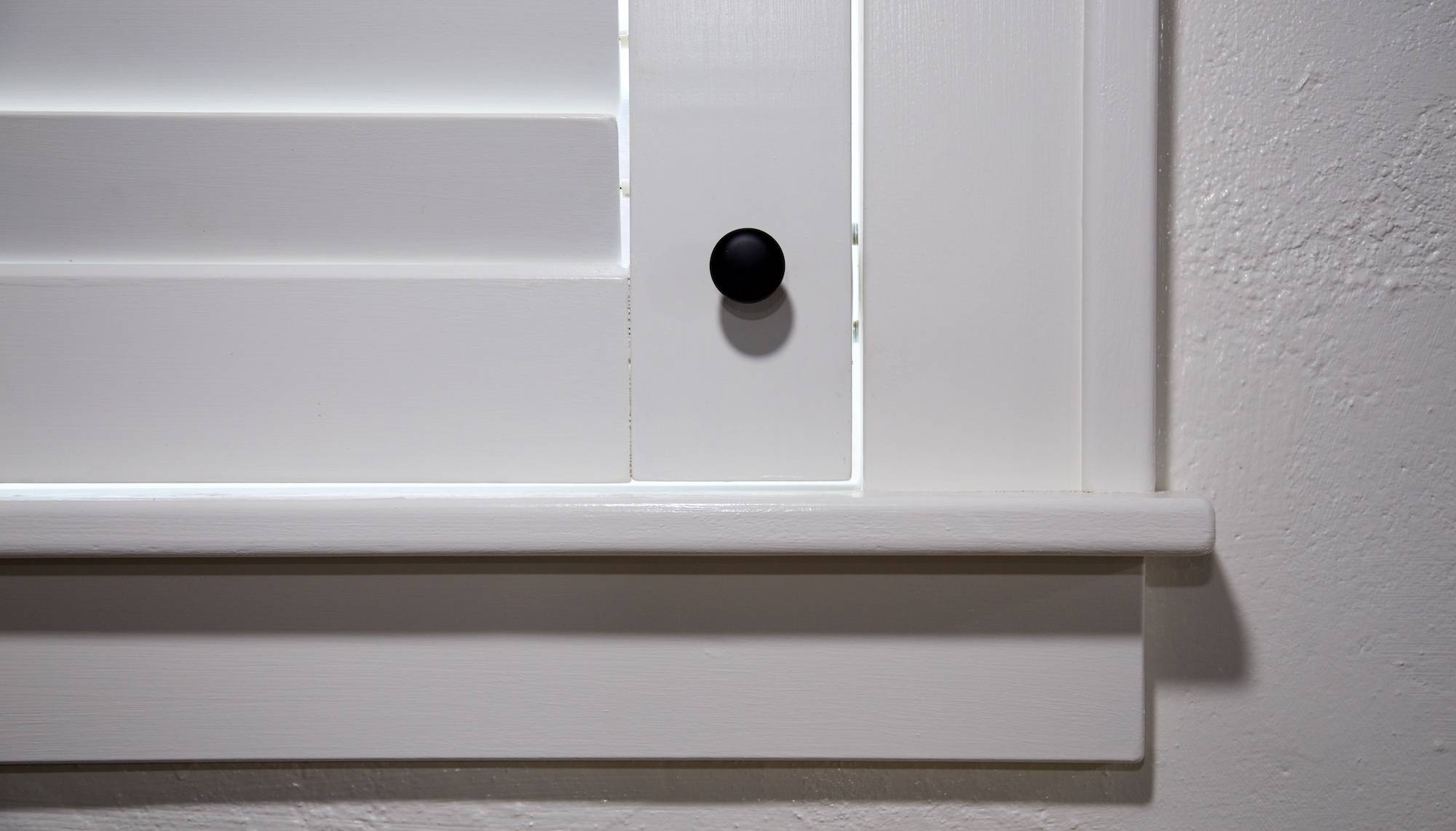 I installed a magnetic catch near the handle that gives the window a very satisfying "click" when it closes, holding it in place perfectly. I also have a lock that wasn't installed before I took the photos. But the main deterrent will probably be just preventing people from seeing all the glowing electronics at night. 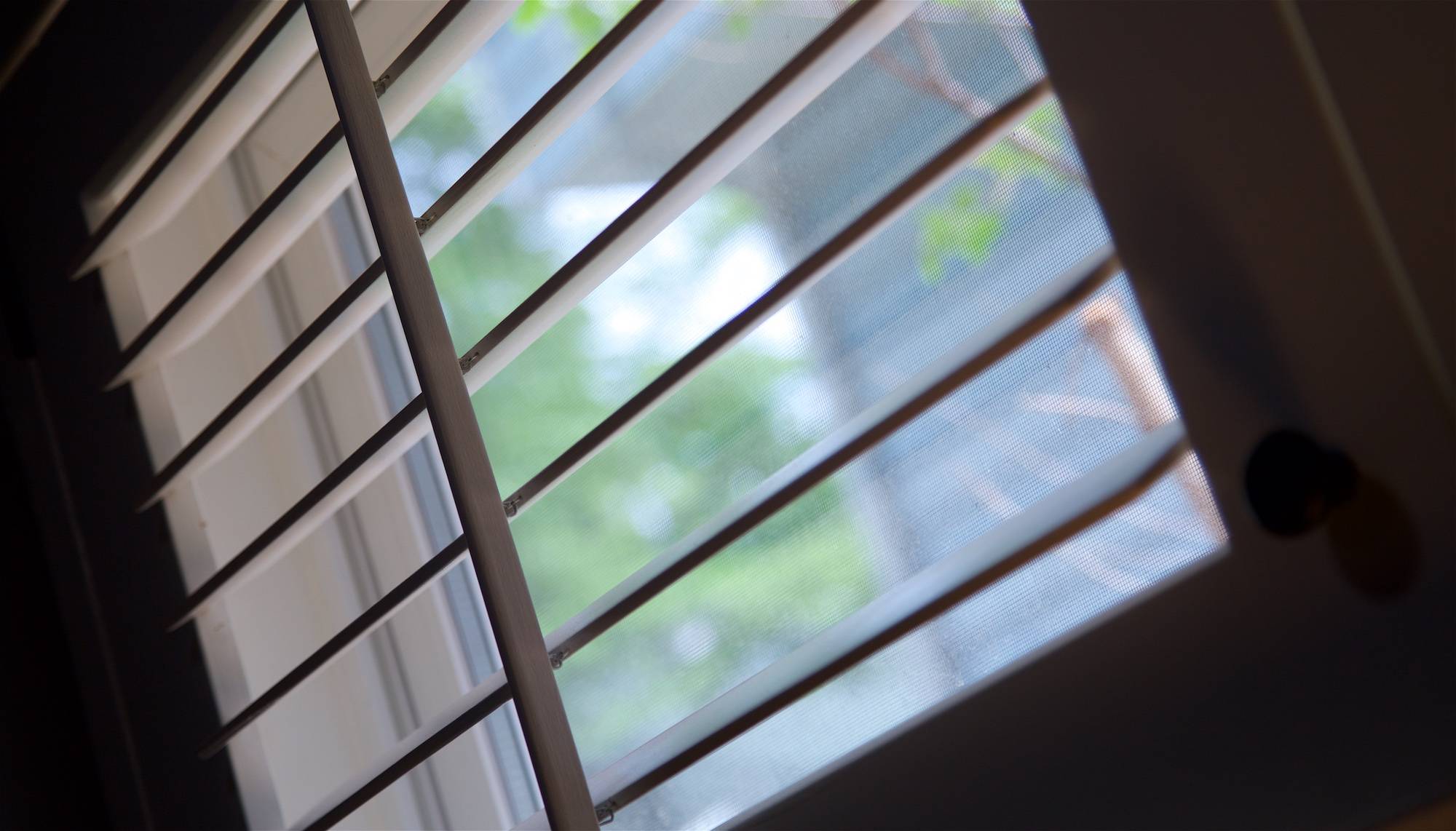 The slats all open in perfect harmony, letting in light when needed.

Anyway, that's my new window thing. I'm not sure it deserved its own blog, but I don't have the attention to sit and watch Queer Eye without also doing something, so tonight it was writing this blog. Onto the next project.

UPDATE: Thanks to my sister-in-law, who told me these “window things” are really called plantation shutters.

Puts my cardboard in the window well to shame!

Beautiful! And...don't you have a job or something to go to?

@Fawn lol. I just don’t watch that much TV.

Dave, your fearless curiosity is an admirable trait. Coupled with your ridiculous talent for creating stuff, you're dang-nigh unstoppable. Well done!

You are so creative! I love reading all the details. Great job!